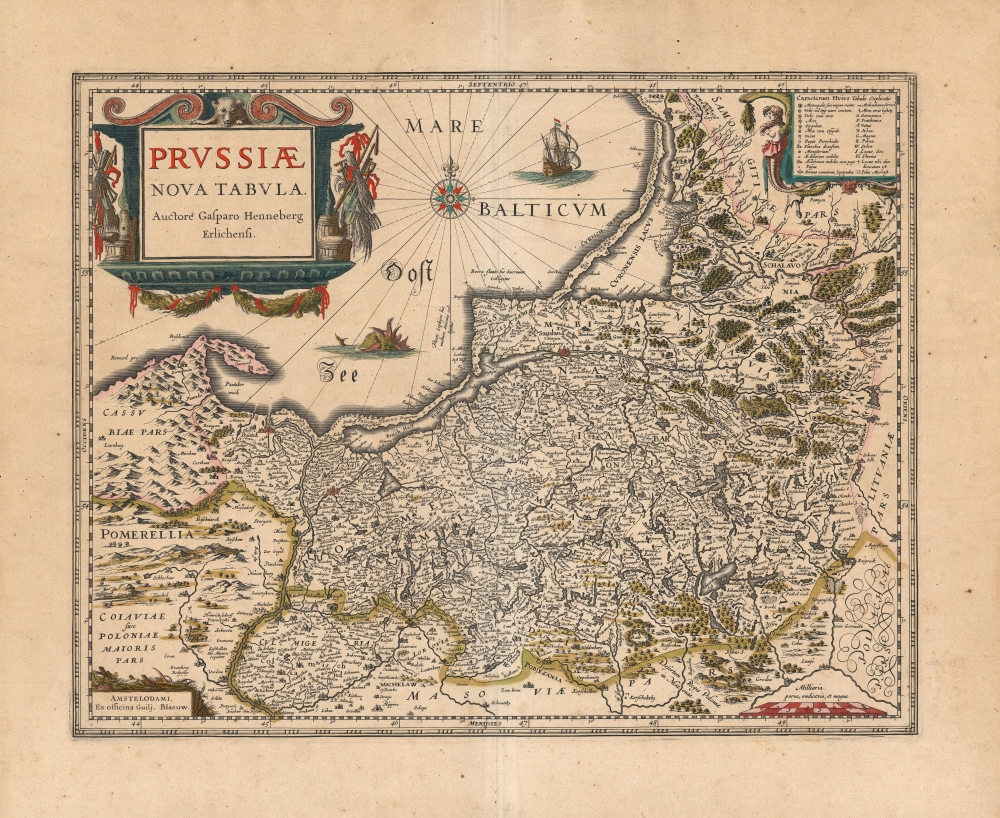 A beautiful, original-color example of Willem Blaeu's map of Prussia, among the maps first added to the Appendix in 1630. It depicts the region now comprised of northern Poland (as far south as Toruń on the Vistula River), the Russian province of Kaliningrad, and western Lithuania. Detail spans from just west of Gdansk to Augustów in the east. The northeast limits of the map are marked with the region of Samogitia, and the Lithuanian coastal town of Palanga.

This map's production involves an array of the greatest names in early printed mapmaking. Though appearing in Willem Blaeu's atlases, the plate was among those engraved by Jodocus Hondius in 1629, which thereafter were purchased by Blaeu for inclusion in his atlases - after having replaced the former mapmaker's imprint with his own. Furthermore, although neither Hondius nor Blaeu acknowledge it, their map is an amended and embellished copy of Abraham Ortelius' 1595 map, itself derived from the magnificent and unobtainable 1576 map of Prussia produced by Caspar Hennenberger.

It is initially tempting to say that Hondius' contributions to Ortelius' edition of the Hennenberger map were cosmetic. Certainly, Hondius' martial cartouche, and the buxom lamia decorating the legend at the upper right were fashionable improvements on the 16th-century strapwork of the Ortelius, Spaces left blank on the older map are here filled with beautifully-engraved mountains and forests. The Baltic is embellished with a fine compass rose, a sailing ship, and a wildly-hirsute sea monster. One obvious change in content between the Ortelius and the present work is the depiction of the Hel Peninsula north of the Pautzker Wick. Ortelius' depiction of it is identical to that of Hennenberger. Hondius has fattened it, and added two towns - Axtermis and Overnord - which do not appear on the Ortelius, but do appear on the 1595 Mercator. (That map, moreover, presents Hel Peninsula as an island - perhaps recording a prominent break in the sandbar?) The Mercator appears to also have been largely informed by the Hennenberger, but it was not a copy of the Ortelius, and with it there are more divergences in the neighboring regions. Mercator's source with respect to Hel Peninsula/Island is not known, but it would appear that while Hondius hewed close to the Ortelius, this obvious distinction led him to incorporate some but not all of Mercator's data.

This map was engraved by Jodocus Hondius for inclusion in his 1629 Appendix. Its imprint was altered by Blaeu for inclusion in his atlases in 1630, and that firm continued to use the plate until its replacement in the 1644-1655 Latin edition of the Atlas Novus. The present example conforms typographically to the 1635 French edition of that work. The map appears to be well represented in institutional collections.


Caspar Hennenberger (1529 – February 29, 1600) was a German Lutheran pastor, historian and cartographer. He was born in Erlich, in Thüringen; he started his studies in Lutheran divinity at the University of Königsberg in 1550, and he would work for nearly thirty years as a Lutheran Pastor. His scholarship apparently reached beyond divinity, however: with the support of his patron Duke Albert of Prussia, and the aid of Prussian mathematician Nicolaus Neodomus, Hennenberger would produce, and in 1576 publish, the first detailed map of Prussia. He accompanied that work with several books amplifying on the map. Hennenberger's map would be well received: Abraham Ortelius would adopt Hennenberger's map as a model, replacing the outdated map derived from Heinrich Zell's 1542 work. Learn More...

Baeu, W., Theatre du Monde ou Nouvel Atlas, (Amsterrdam) 1635.     The classic Dutch atlas, whose publication ushered in the Dutch golden age of cartography. Willem Jansz Blaeu had been, since 1604, producing engraved maps for sale; these were separate issues (and all consequently extremely rare) until the publishing of Blaeu's Appendix in 1630 and 1631, which also included a number of maps purchased from the widow of Jodocus Hondius, (for example his famous iteration of John Smith's map of Virginia.) In 1634, he announced his intention to produce a new world atlas in two volumes, entitled Theatrum Orbis Terrarum, sive Atlas Novus (in an effort to invoke the successful work of the same title produced by Ortelius the previous century, while reinforcing the notion of it being a new work.) This work was published first in German in 1634, followed by Latin, Dutch and French editions in 1635. Blaeu's maps have always been noted for the quality of their paper, engraving and fine coloring, and this was the intent from the very start. The 1634 announcement of the upcoming work described it: 'All editions on very fine paper, completely renewed with newly engraved copperplates and new, comprehensive descriptions.' (van der Krogt, p,43) Many of the most beautiful and desirable maps available to the modern collector were printed and bound in Blaeu's atlases. Willem's son, Joan, would go on to add further volumes to the Atlas Novus, concurrently printing new editions of the first two volumes with additional maps, in effect making these new editions an entirely new book. Under Joan there would be nine Latin editions, twelve French, at least seven Dutch, and two German. This exceedingly successful work would be the mainstay of the Blaeu firm until 1661, at which point the work was supplanted by Joan Blaeu's masterwork Atlas Maior in 1662.