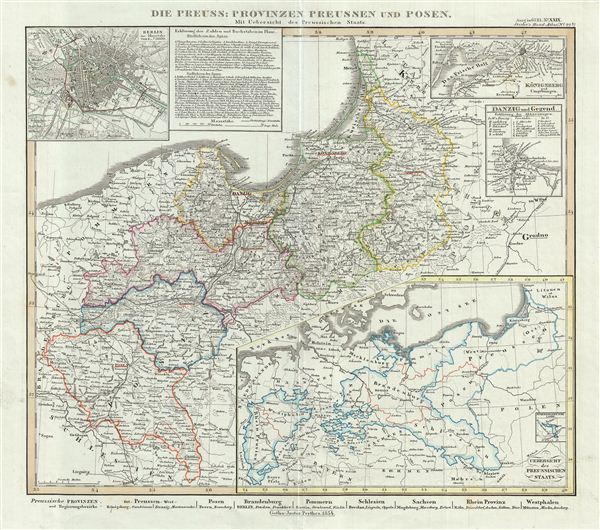 This is a fascinating example of the 1854 Justus Perthes map of Prussia. It covers from Brandenburg to Grodno, part of modern day Poland and Lithuania. An inset in the lower right quadrant offers an overview of the Prussian States. Three other insets detail the cities of Berlin, Danzig and Konigsberg. Map is highly detailed with both political and physical data. Various cities, mountains, roads, rivers and an assortment of additional topographical details are noted.

Prussia attained its greatest importance in the 18th and 19th centuries when it dominated northern Germany politically and economically. The German Confederation, created in 1814, acted as a buffer zone between Austria and Prussia, its two largest and most powerful member states. Nonetheless the rivalry between the two powerful states increased until it finally broke out into the Austro-Prussian War. Prussia won the Austro-Prussian War in 1866 leading to the collapse of the German Confederation. A few years later, in 1871, most of the former Confederation states were folded into the newly proclaimed German empire.

Political and regional borders are highlighted in outline color. Unlike other cartographic publishers of the period, the Justus Perthes firm did not transition to lithographic printing techniques. Instead, all of their maps are copper plate engravings and hence offer a level of character and depth of detail that was impossible to find in lithography or wax-process engraving. All text is in German. Issued as plate no. 22b in the 1854 edition of Stieler's Hand-Atlas.