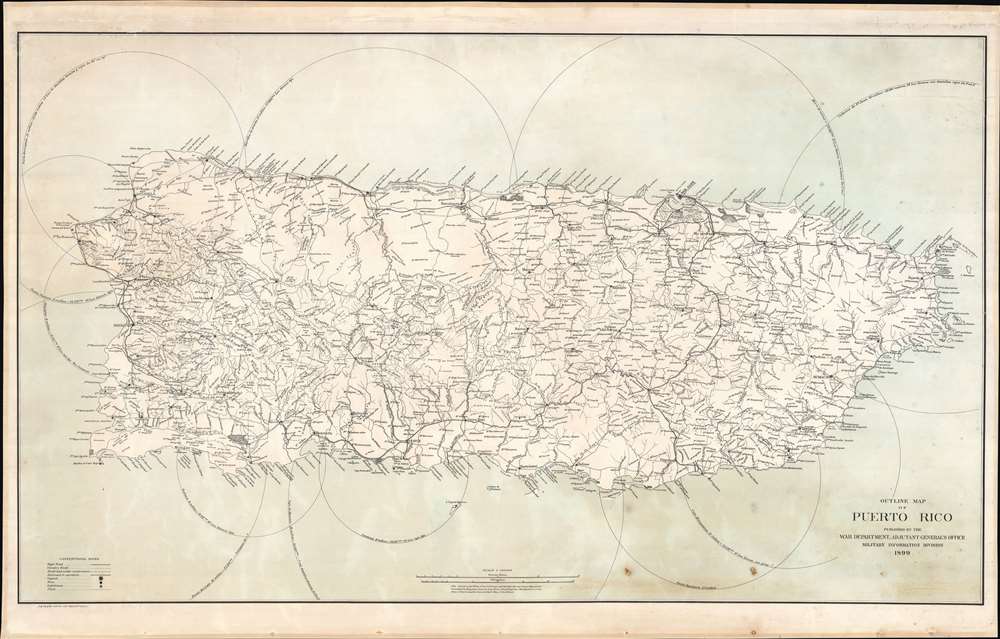 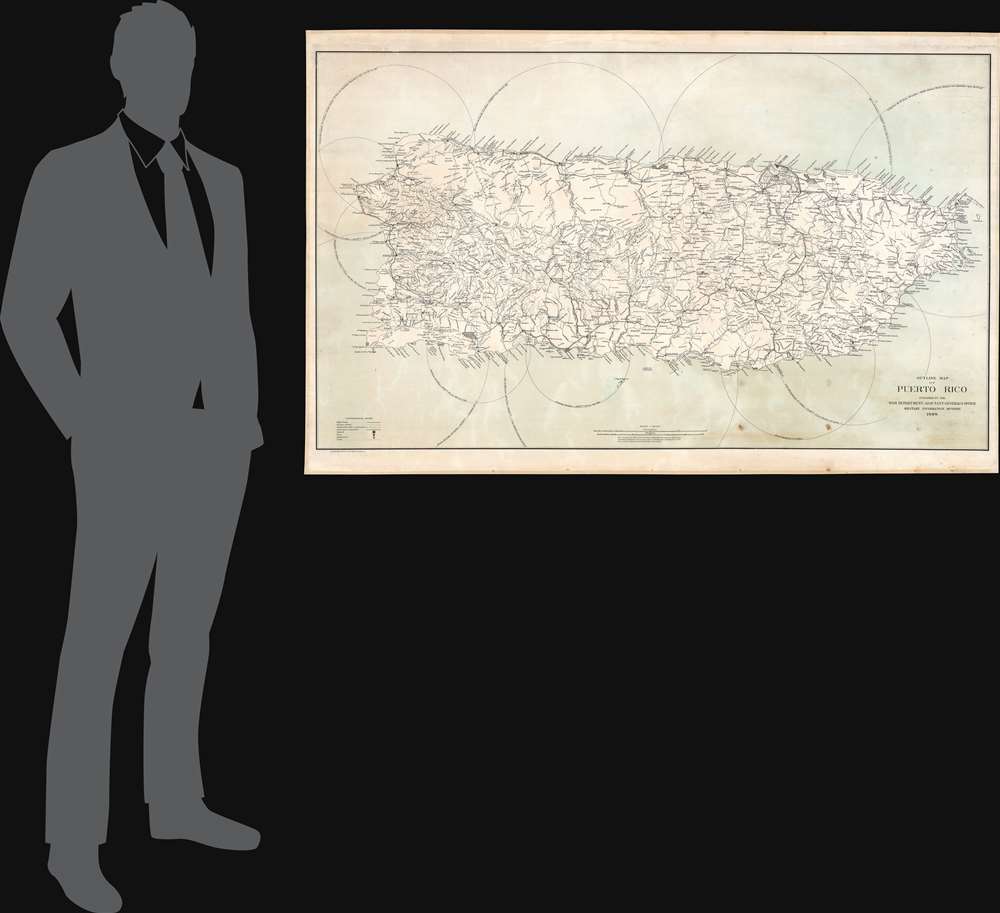 Largest and Best Map of Puerto Rico during Spanish-American War.
$1,500.00

A remarkable 1899 large-scale map of Porto Rico (Puerto Rico) printed shortly after the island's annexation at the end of the Spanish-American War (April 21, 1898 - August 13, 1898). The map is derived from the U.S. Army General Staff Map - the map used to plan American military action in Puerto Rico as well as the largest and best map of the island yet produced. Like the General Staff Map, this chart is incomplete, with some areas exhibiting only the most spartan cartographic detail.

In addition to the identified sources, map scholar suggests,

Several clues suggest that the General Staff Map of Puerto Rico, from which this was copied, was itself copied at least in part from captured Spanish sources. Not only are the radii of visibility for the lighthouses given in Spanish, but in several places an ellipsis followed by a question mark indicate that a copyist was unable to decipher what was probably a manuscript source. Tracing of the islands standing of the southern shore is also incomplete: they appear as ghostly fragments of territory. (Craib, R. B., and Burnett D. G., 'Insular Visions: Cartographic Imagery and the Spanish-American War', The Historian, page 108.)

The Spanish-American War was fought between Spain and the United States between April 21, 1898, and August 13, 1898. The war started after the USS Maine suffered a massive explosion and sank in Havana Harbor. Tensions had been rising between the two countries for some time, with the U.S. showing support for Cuban independence while Spain claimed Cuba to be a province of Spain. The Spanish were quickly outclassed and outnumbered by the U.S. forces and surrendered after minimal conflict. After the fighting ended, the U.S. received the Philippines, Guam, and Puerto Rico along with Cuba as U.S. protectorates.

This map is based upon the work of the U.S. Coast Survey, enhanced by additional wartime cartographic reconnaissance by the U.S. Army Engineering Corps operating under Brigadier General Roy Stone, and seized Spanish maps. We note perhaps ten examples in institutional collections, but the map is rare to the market.

Andrew B. Graham (1845 - September 9, 1909) was an American lithographer active in Washington, D.C. in late 19th and early 20th century. Graham was born in Washington D.C., the son of a lithographer and engraver. After college, he joined the U.S. Coast Survey, where he was a draftsman until 1889. He retired from the Coast Survey to take over management of his father's lithography firm. The firm, Andrew B. Graham Company, was one of several that thrived on lucrative government publication contracts. Graham died of 'brain fever' in his Washington D. C. residence on September 9 of 1909. Some of his work was republished posthumously until about 1917, and his firm was active until at least the early 1920s. Learn More...

Good. Some spotting. Remounted on fresh linen with neutral edging.