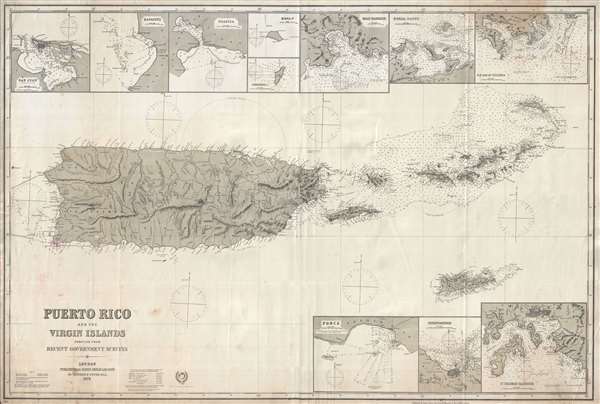 The finest map of Puerto Rico we have seen! Includes the Virgin Islands and names billionaire haven Necker Island.

An expansive, exceptional, and extremely rare 1879 nautical chart or maritime map of Puerto Rico and the Virgin Islands. This is the largest and finest map specific map of Puerto Rico we have yet encountered. The chart covers the island in great detail, offering both nautical and inland detail, including topography rivers, and political divisions. The focus of the chart, however, are the seas around the Virgin Islands between Puerto Rico and Anegada, where treacherous reefs abound. The map offers detailed hundreds of soundings in fathoms as well as shading to indicate dangerous howls and banks. There are 10 inset map detailed harbor plans, including San Juan, Mayagüez, Guánica, Mona Island, Sombrero Island, Road Harbour, Gorda Sound, the southeast end of Culebra, Ponce, Christiansted, and Saint Thomas.

This map is extremely rare and we are aware of only one other example, in private hands. No examples are noted on the OCLC. This map is owned jointly by Geographicus and Vetus Carta Maps.

Very good. Some creasing. Minor stains near title. Backed on blue paper.
Looking for a high-resolution scan of this?