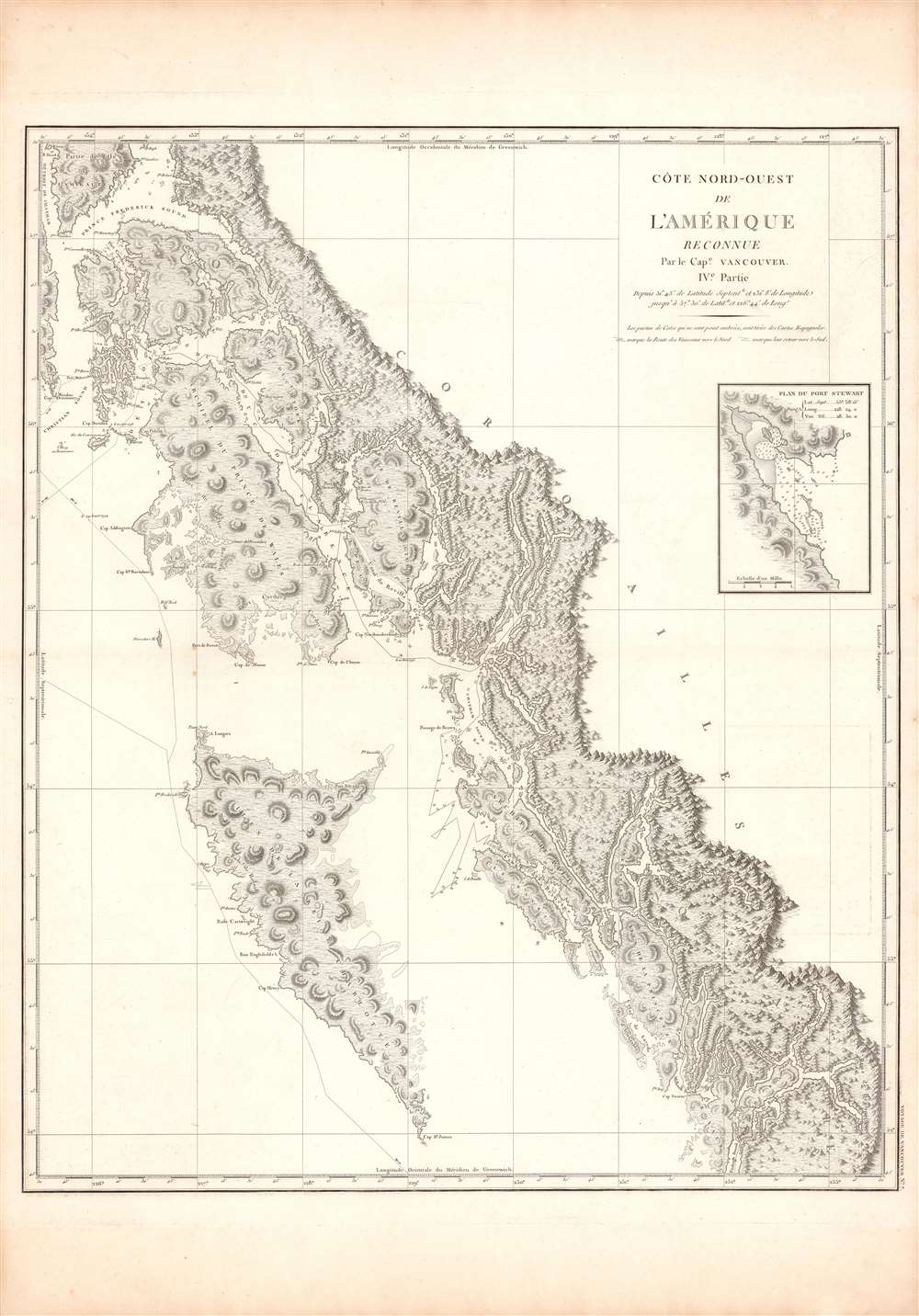 The first accurate map of the southern Alaska coastline.
$2,000.00

One of George Vancouver's most important and influential charts, this is a 1799 mapping of the coast from (Prince) Frederick Sound and Prince of Wales Island to Haida Gwaii (or the Queen Charlotte Islands), now on the border between Alaska and Canada. It was the first truly accurate and detailed reconnaissance of this forbidding coastline.

Queen Charlotte Island and Prince of Wales Island see their full shores mapped in detail for the first time. Vancouver's meticulous attention to detail was so effective that his maps of the northwest American coast continued to be the best available for nearly a century. Here, coastal features and hazards are charted and soundings are provided around Port Stewart and Chatham Sound. A line with dates traces the progress of Vancouver's ships. An inset is provided of Port Stewart, now part of the Ketchikan Gateway Borough of Alaska. These island as well as the adjacent coastal lands are the traditional home of the Haida and Tlingit peoples, known for their fine carving and distinctive tribal culture.

The Vancouver Expedition was an epic four-and-a-half-year circumnavigation of the globe combining exploration and diplomacy. The expedition, launched under the auspices of the British Royal Navy, was commanded by Captain George Vancouver (1757 - 1798). It is considered the last great voyage of discovery of the 18th century and the last major voyage to search for a Northwest Passage. En route, Vancouver painstakingly charted North America's northwestern Pacific Coast regions, including parts of Alaska, Washington, Oregon, and British Columbia. He also explored the Hawaiian Islands and the southwest coast of Australia.

The goals of the expedition were both scientific and political. Vancouver was charged with precisely triangulating the locations of New Zealand and Australia, map the fur-rich Pacific Northwest for potential British settlement, and address unanswered questions from the final Cook Expedition (1776 - 1780) regarding Cook's Inlet and the possibility of a Northwest Passage.

In 1795, Vancouver returned to a Europe enmeshed in the French Revolutionary Wars (1792 - 1802). With the looming threat of Napoleon, Britain had little interest in science and discovery. Thus, despite his achievements, the great explorer was sidelined and besieged by personal and political enemies made during the voyage, including the expedition's naturalist Archibald Menzies (1754 - 1842) and the wastrel sailor Baron Thomas Pitt (1775 - 1804), who attempted to beat Vancouver down on the streets of London. By this time, the navigator's heath had also deteriorated and he died in 1798 of unknown causes.

This example of the map was issued as Plate No. 7 in the highly desirable 1799 French edition of Vancouver's atlas, which is noted for being more beautifully produced with better engraving, higher quality paper, and more detail than the 1798 English edition. None of the maps list an engraver, but the atlas's introductory text states that they were engraved at the Dépôt des Cartes et Plans de la Marine under the supervision of Jean-Nicholas Buache de Neuville. The French edition of Voyage de découvertes is well represented in institutional collections. However, we see examples of the separate chart cataloged only in the Biblioteca Nacional de España, the Anchorage Museum, and the University of Michigan.