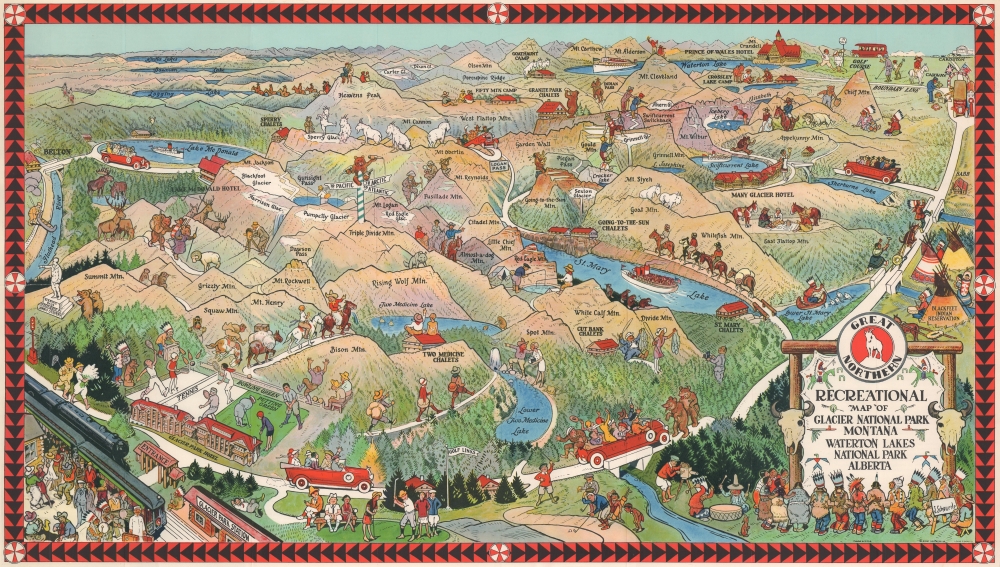 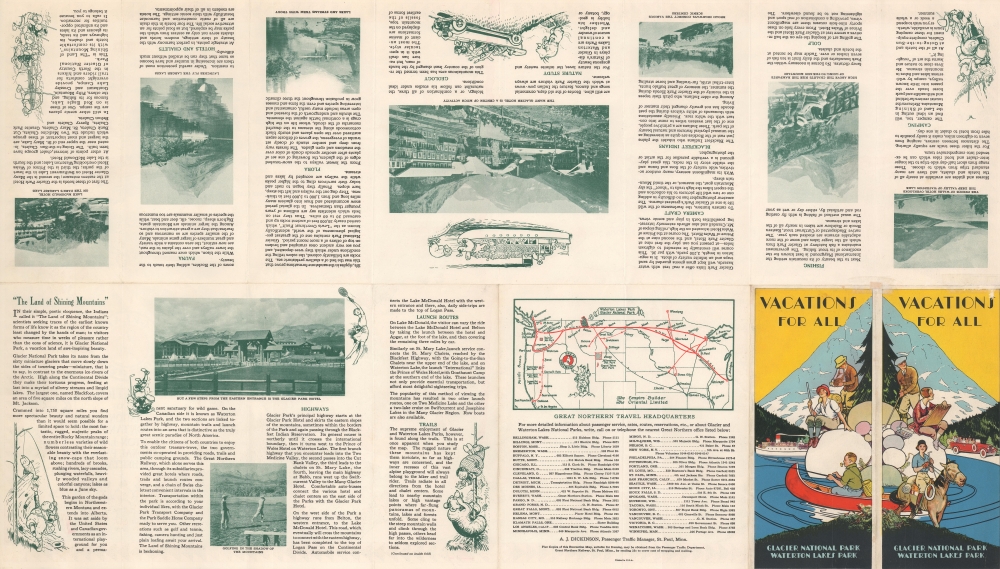 This is an eye-catching c. 1927 Joseph Scheuerle pictorial map of Glacier National Park, Montana, and Waterton Lakes National Park, Alberta, Canada. Created for the Great Northern Railway, Glacier National Park occupies the foreground as well as most of the sheet. Tourists are illustrated riding on horseback, fishing, and hiking, among numerous other activities. Carloads of other tourists explore the region along its roads. The region's iconic wildlife is emphasized, including elk, moose, bears, and mountain goats. Numerous comical vignettes add levity. For example, in the foreground just to the left of the title a car full of tourists is stopped on the road by two bears standing on their hind legs. It looks as it one of the bears is carrying a cane! Other comical sights include a Native American being chased by a dog, a bear atop a pole illustrating the workings of 'Three Divide Mountain', and two more bears reading about John F. Stevens and the discovery of Maria's Pass.

This map was created by Joseph Scheuerle and published by the Great Northern Railway c. 1927. Cataloged examples of this map vary in date from 1925 until 1930, but none are definitive, hence our tentative dating of this piece as c. 1927. Cataloged examples are part of the collections at the Newberry Library, the University of Wyoming, the Wisconsin Historical Society, the Montana Historical Society, and the Colorado School of Mines, along with a handful of others. An example is also part of the David Rumsey Map Collection.

Joseph Scheuerle (March 15, 1873 - March 25, 1948) was an Austrian-American artist, illustrator, and painter. Born in Vienna, Austria, to vacationing German parents, he grew up in Stuttgart, Germany. Scheuerle immigrated to the United States with his family in 1882. The family lived in Cincinnati, Ohio, where Scheuerle's parents enrolled him in school. Once his teachers realized that he spoke almost no English, they sat him in the back of the classroom, where he spent all his time drawing. Then, he attended the Art Academy of Cincinnati and graduated in 1896. After graduation he started working for the Strobridge Lithographing Company, where he made circus and Wild West posters. In 1900 Scheuerle moved to Chicago and continued working as an illustrator. While in Chicago, Scheuerle commenced his series of portraits of Native Americans, meeting and painting the portraits of the performers traveling with Buffalo Bill's Wild West show. Scheuerle traveled to the Pine Ridge Reservation in South Dakota in 1909, where he painted the portrait of several Sioux. Among his subjects was the Lakota leader Red Cloud, who was almost ninety years old. In 1910 Scheuerle began creating work for the Great Northern Railroad, including its iconic mountain goat logo. This led to his first trip to Glacier National Park in during the summer of 1910. Sheuerle took advantage of this trip to visit other Native American reservations and paint portraits of the people he met. Over the course of his career, Scheuerle produced over two hundred portraits of Native American people. He died of a heart attack at home in South Orange, New Jersey. Scheuerle married Carolyn Lohrey in 1904, with whom he had a daughter in July 1906. Learn More...