1794 Laurie and Whittle Nautical Map of the Red Sea 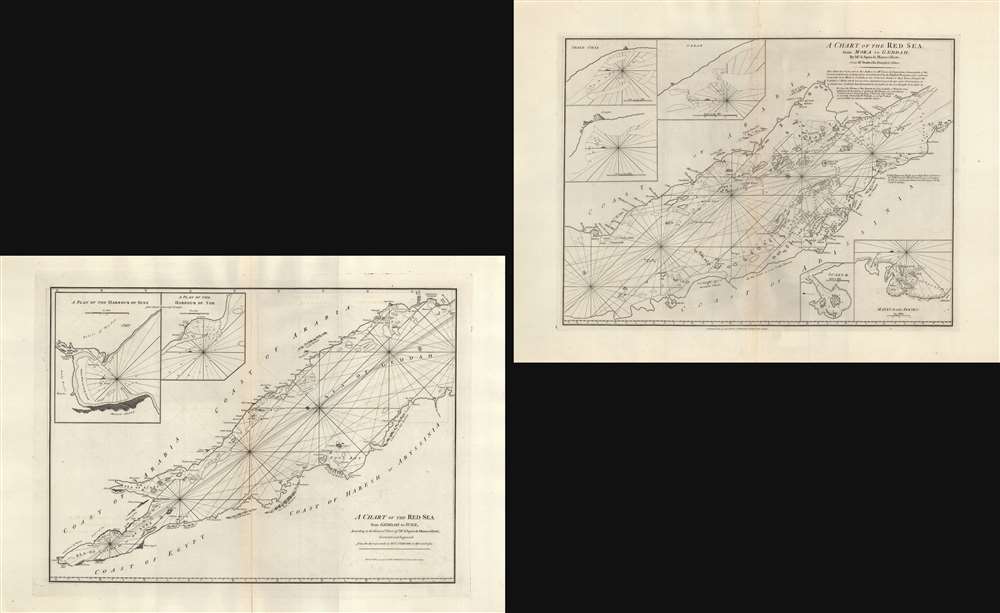 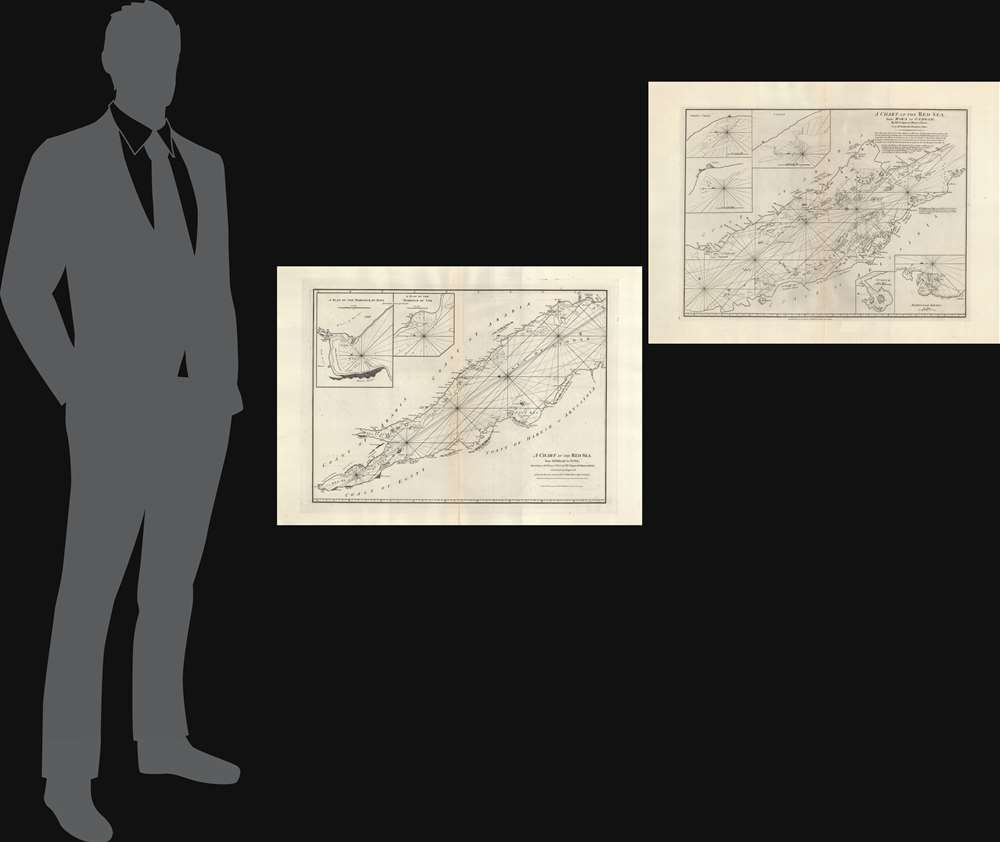 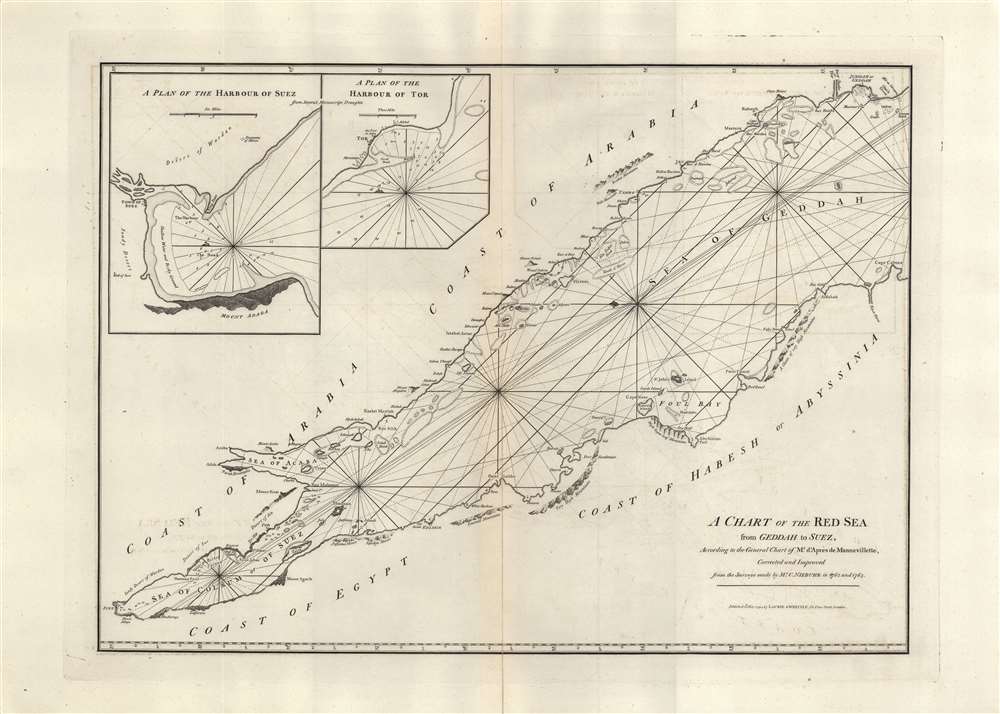 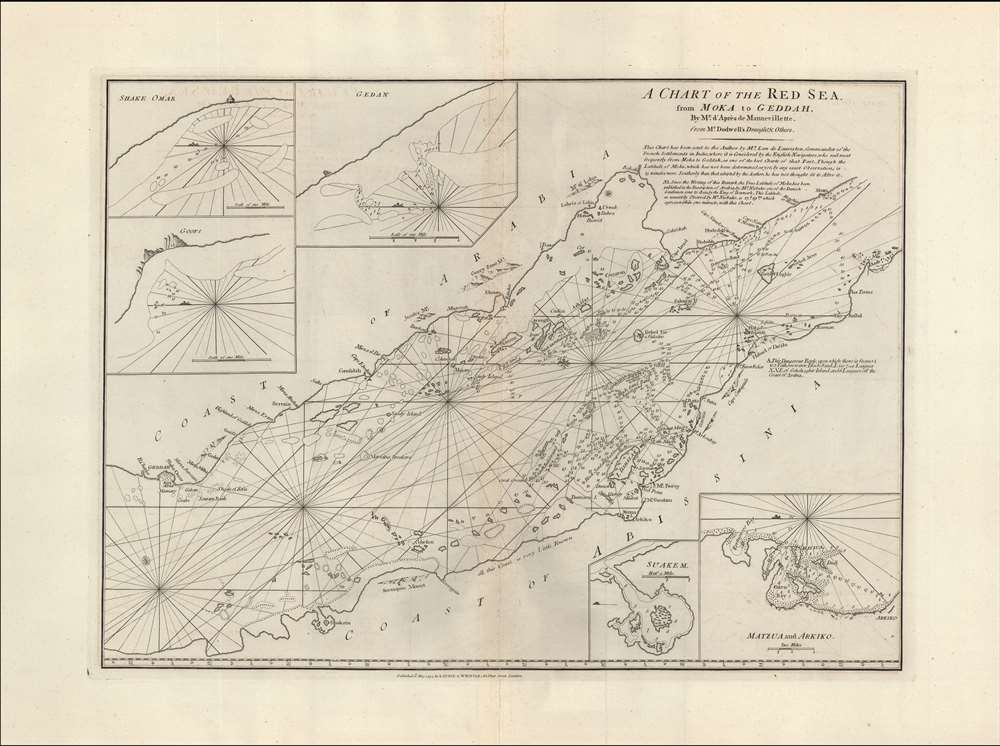 1794 Laurie and Whittle Nautical Map of the Red Sea

A set of two 1794 nautical charts or maritime maps of the Red Sea by the British publishers Laurie and Whittle illustrating the nautical route to Mecca as well as the Mocha Route (coffee anyone?). The maps are oriented to the east. The first covers from Mocha to Jeddah, the more lively southern part of the Red Sea. The second covers the northern portions from Jeddah to Suez.

Although critical to trade and pilgrimage, a combination of shallow reefs, an unwelcoming coastline, and unpredictable wind patterns restricted hydrographic mapping and made navigating the Red Sea exceptionally daunting. Knowledge of safe routes through the reefs and shoals were jealously guarded by the Arab coastal traders who dominated the Jeddah route. Consequently, the Red Sea was poorly understood and dangerous to other travelers well into the 19th century, until the rise of steam navigation mitigated some of these issues. The general vagary here is illustrative of the overall lack of maritime reconnaissance. Soundings are few and far between, being limited to the Sea of Suez. The cities of Aqaba (Acaba), Jordan, and Eilat (Ailah), Israel, are noted, as is the site of Mt. Sinai. The remainder is nautically vague with reefs ghosted in, especially along the Arabian coast. Safe anchorages are noted here and there. Inset maps in the upper left quadrant detail the Harbor of Suez and the Harbor of Tor.

From Mocha to Jeddah

When this map set was issued, the most active maritime trade route in the Red Sea connected Mocha (Moka) and Jeddah (Geddah). Jeddah, further north, was and is the maritime gateway for the Islamic Hajj to Mecca. Mocha, today part of Yemen, was the world's largest exporter of coffee and is the source of the modern term 'mocha.' Insets illustrate Shake Omar, Gedan, Goofs, Suakem (Suakin, Sudan), Matuza (Massawa, Eretria) and Arkiko (Arqiqo, Eretria). It was assumed, post-publication, based upon French reports, that this map's situation of the coffee center Moka (Mocha) was off by some 15 minutes. Subsequent explorations by the Danish navigator Niebuhr confirmed that the location of Mocha as presented here is correct to within a minute.

A series of curious annotations in the upper right quadrant offer insight into the history of this chart. It was originally prepared from a manuscript drawn by one 'Mr. Dodwell', who could only be Henry Dodwell, the famed 17th century Egyptologist. That the cartographic sources referenced were nearly 100 years old when this map was made underscores the lack of fresh knowledge plaguing Red Sea hydrography.

This chart is cartographically derived from Jean-Baptiste d'Apres de Mannevillette's similar chart issued for the 1745 Neptune Oriental. It was twice reissued by Sayer and Bennet, and again, in this updated version by Laurie and Whittle, who acquired the Sayer and Bennet printing plates. The present Laurie and Whittle example is notable for several important updates based upon survey work conducted by Danish navigator Mr. C. Niebuhr in 1762-3.

Very good. Centerfold mend to both sheets. Size noted is for individual sheets.