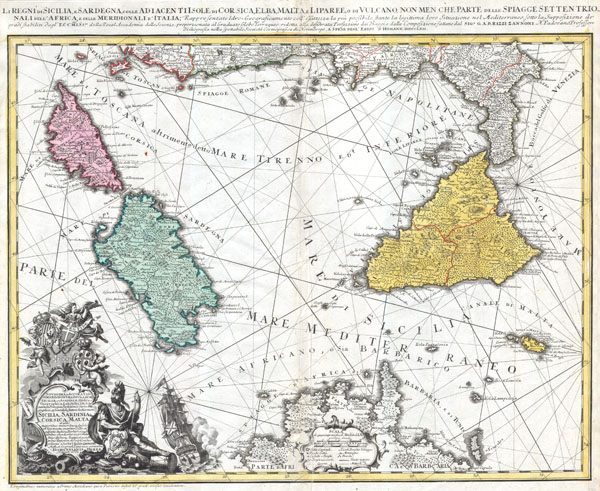 This is one of the Homann Heirs finest and most appealing maps of southern Italy, Sicily and Sardinia. Covers the region from Corsica and the boot of Italy south to Tunisia and North Africa. Includes the island of Malta in the lower right quadrant. Lower left quadrant offers an elaborate title cartouche with a sailing ship, armorial shields of Sicily, Sardinia and Malta, and a warrior, possibly Persus, bearing Medusa shield. Geographically speaking, the map is generally accurate though the coastlines do indicate some improvements and updates over previous Homann maps. Rougly translated the lengthy title reads: The Kingdoms of Sicily and Sardinia with Adjacent Island of Corsica, Elba, Malta and Liparee or Vulcano, and the beaches of Northern Africa and Southern Italy. Represented as geographically accurate as possible, bearing on their legitimate situation in the Mediterranean under the supposition of established geography of the Reial Acadmey of Sciences, proportional to the graduated globe of the Earth; reduced to the desired size and composition by Mr. G. A. B. Rizzi Zannoni, Professor of Geography of the Cosmographic Company of Nuremburg, for the Heirs of Homann MDCCLXII. This map was drawn by G. A. b. Rizzi Zannoni N. Padovano for inclusion the 1752 Homann Heirs Maior Atlas Scholasticus ex Triginta Sex Generalibus et Specialibus…. Most early Homann atlases were 'made to order' or compiled of individual maps at the request of the buyer. However, this rare atlas, composed of 37 maps and charts, was issued as a 'suggested collection' of essential Homann Heirs maps. A fine copy of an important map.