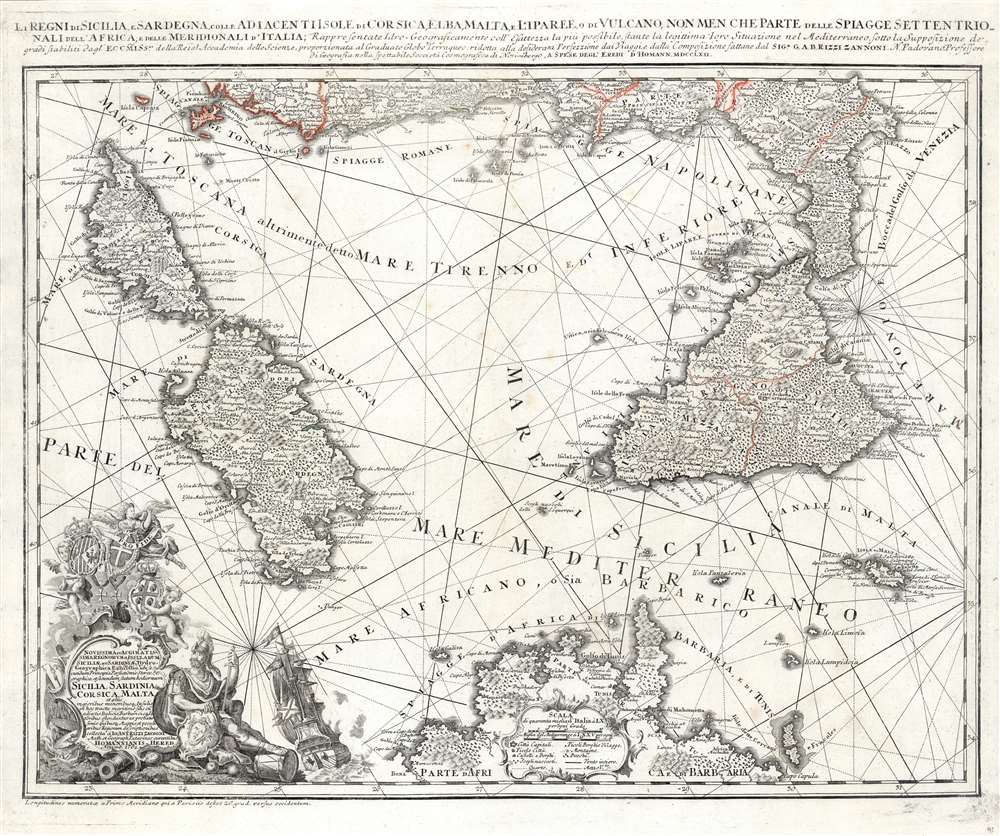 This superbly detailed map, engraved by Homann Heirs in 1762 based on the work of Giovanni Antonio Bartolomeo Rizzi-Zannoni, is among the finest and most appealing maps of Corsica, Sicily and Sardinia. The map encompasses the Mediterranean from Corsica to Malta and the Gulf of Venice, and from the west coast of Italy to the Tunisian coast of Africa. The map's complex stereographic projection allows the presentation of the three main islands of the map to be presented as if on a plane, while necessarily distorting the areas at the edge of the map; it is also generally oriented to the northeast, resulting in the unusual and symmetrical presentation of the region. The map is significantly more complex and detailed than previous Homann or Homann Heirs maps; this is due to the work of the Italian cartographer Rizzi-Zannoni, who in 1757 had traveled to Germany to enter the service of Prussia during the Seven Years' War.

The elaborate cartouche in the lower left quadrant, accompanied by a fine sailing ship, displays the armorial shields of Sicily, Sardinia and Malta. A warrior reclines beside the cartouche, probably Mars but possibly Perseus: he bears a shield decorated with Medusa's head. Perseus slew the Gorgon Medusa using Athena's mirrored shield to avoid being stoned (as everybody must be) but Medusa's head is displayed as an aegis on Athena's shield often in classical art, so presumably the shield is hers. The bearded warrior is in no way Athena, so perhaps her shield is here on loan again.

The map was engraved in 1762, and would be included in Homann Heirs atlases (both composite atlases and the Maior Atlas Scholasticus ex Triginta Sex Generalibus et Specialibus, a rare atlas, composed of 37 maps and charts, issued as a 'suggested collection' of essential Homann Heirs maps. We see perhaps 20 examples of the separate map in institutional collections.