1845 Brué Map of Mexico and the Republic of Texas 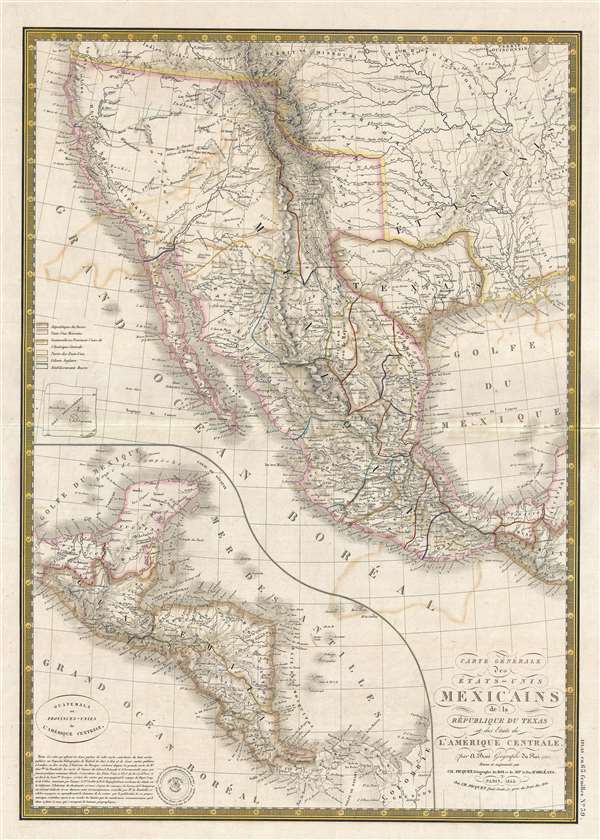 1845 Brué Map of Mexico and the Republic of Texas

One of the only foreign language maps to identify and name the republic of Texas, not only on the map proper, but also in the title.

An unusual find, this 1845 French map by Adrien Hubert Brué is one of the only foreign language maps to identify and name the republic of Texas, not only on the map proper, but also in the title. The map is centered the Republic of Texas, which is outlined and labeled prominently. It extends north to the 42nd parallel, the modern-day border between California and Oregon, south to Guatemala, East as far as the Mississippi river, and west to the Pacific seaboard. The essential cartographer here dates to the 1825 first edition, which, in comparison is exclusively a map of Mexico, with Texas integrated into the state of San Luis Potosi. It was modified in 1840, showing French support for the then fledgling nation of Texas. Although the map was updated to reflect the new nation, some of the old naming remains and the word 'Potosi' is still apparent in southern Texas. Early Texas details include the identification of Austin, Houston, Bastrop ou Mina, Ft. Matagorda, Guardia y Barca, Ft. del Altar, Washington, and St. Patrick, among others.

The cartography is distinctly pre-Fremont, but post Humboldt, Pike, and Long. The map identifies 'Lac Timpanogos ou Youta' in an early synthesis of Great Salt Lake and Utah Lake. 'Depot' is identified on the west coast of the lake roughly in the vicinity of modern day Great Salt Lake City. Further west the fictional Rio Buenaventura connects to the Jesus Maria via Lake Teguayo. Some of the cartography here is confusing, but Lac Teguayo probably represents a double mapping of Great Salt Lake. The fact that the lake is ghosted in, as are some of the rivers connecting to it, suggests that Brue was not fully confident of its existence. The Sacramento River, on the other hand is strongly mapped. South of San Francisco bay there are several lakes, including a speculative late and, just a little further south, an oblong Lake Tule.

All in all, this is a truly iconic map of the American west and is rare on the market in this configuration. Most significantly, is it one of the few maps to include the 'Republique du Texas' in the title, a fact made even more notable as this is a foreign production. This map was issued for the 1845 edition of Brue's Atlas Universel. It is of note that Brue died in 1832 and so this map, as well as this edition of the atlas, were issued by his widow. A must-have piece for any serious Republic of Texas collection.

Adrien-Hubert Brué (1786 – July 16, 1832) was a French cartographer active in the late 18th and early 19th centuries. Brué served on various ships from age 12. At 14 he was commissioned to the crew of the Naturalist, one of the two ships in Baudin Expedition (1800 – 1804) to the South Pacific. Later in life, Brué turned to cartography where his work was known for remarkable clarity and accuracy. Brué eventually acquired the prestigious office of Geographe du Roi and often signed his maps as such. In this position Brue contributed to thousands of maps and numerous atlases. Like most cartographers many of his maps were published posthumously by his partner, Charles Picquet's son and heir, Pierre-Jacques Picquet, and were still being updated and republished decades after his death. Learn More...