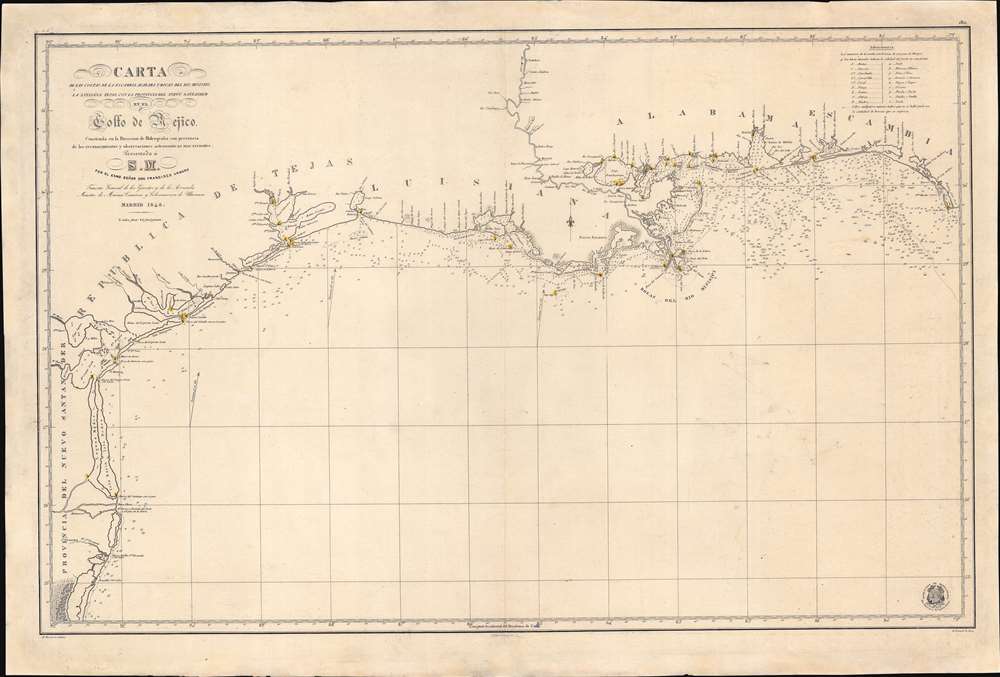 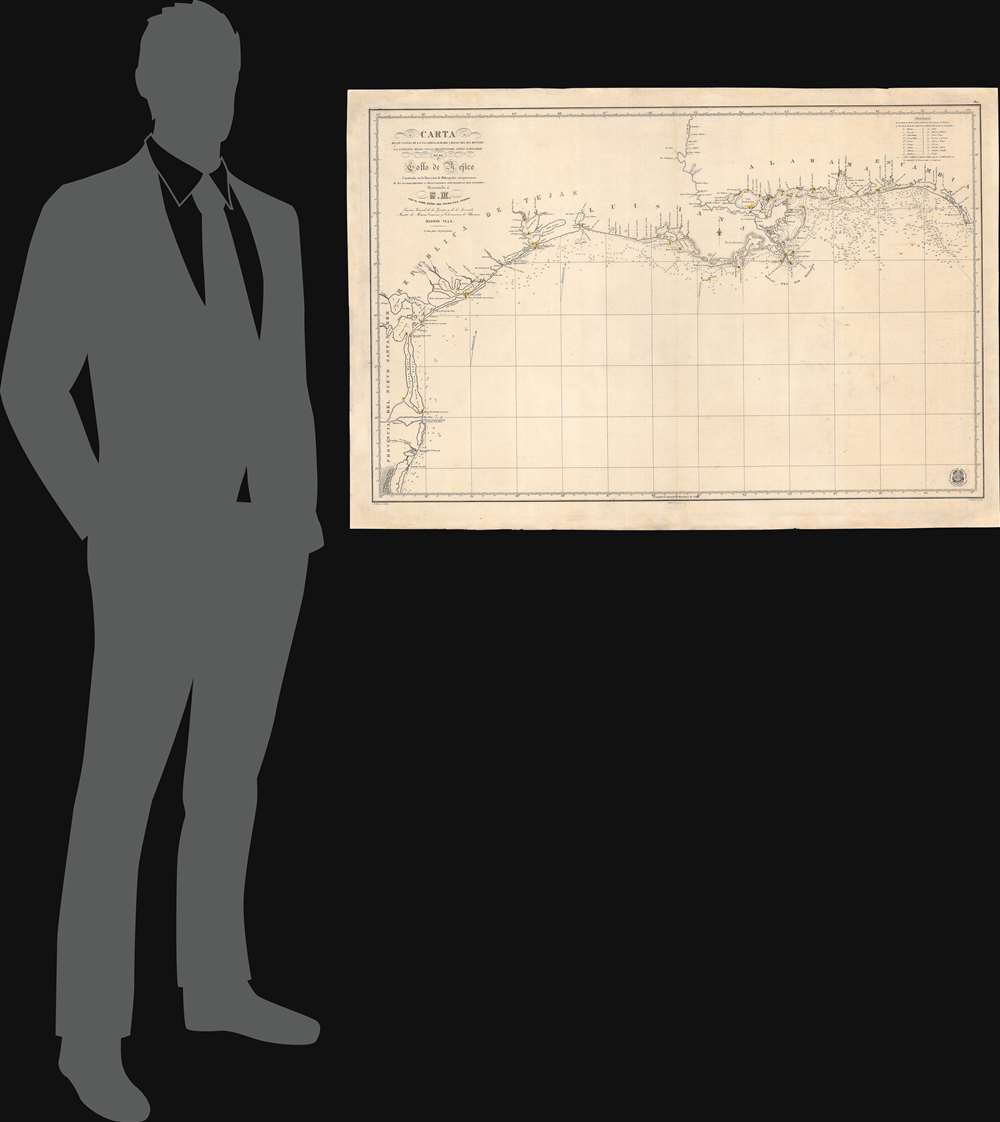 An unusual 1846 Spanish Direccion Hidrografía nautical chart of the Gulf of Mexico recognizing the Republic of Texas. It is one of very few official Spanish publications to name the Republic of Texas, which Spain never formally recognized. The map emerged during a time of strife, both for Texas, which was involved in its own Texan Revolution (1835 - 1836) followed by the Mexican American War (1846 - 1848), but also in Spain, which was devolving into the Second Carlist War (1846 - 1849). Nonetheless, its production points to the complexity of Spanish-Texan relations during the Revolutionary years, when Texas was blockading Mexican trade and the Spanish West Indies in dire need of fresh trading partners.

Spain and the Republic of Texas

Spain never officially recognized the Republic of Texas, nonetheless, from as early as 1841 the Republic of Texas lobbied Spain aggressively to for legitimacy and trade pacts. With a Texan naval blockade limiting access to Mexican ports, the new republic was an ideal trading partner for Cuba and the Spanish West Indies. The proposal met with considerable interest in Spain, but no formal commitment was forthcoming. By 1844, politics in Spain had descended into the chaos leading up to the Second Carlist War (1846 - 1849). With Madrid under martial law no one had interest in foreign diplomacy. While this map is unusual in that it names the Republic despite the fact that Texas was never officially recognized in Spain, it is an indication of Spanish interest in Texan proposals to establish commercial ties and a general demand for such charts. It is also curious that by the time this map was printed, in 1846, the Republic had, for all intent and purposes ceased to exist.

The map's dedicatee, Francisco Armero Fernández de Peñaranda (1804 - 1866), may offer further insight. Amero was Minister of the Navy, Commerce and Colonies in the Ramón María Narváez government. He is occasionally accused of being tolerant or even invested in the Atlantic slave trade - which might have made the pro-Slavery Texan Republic an attractive trading partner. However, it must be admitted, his associations with slavers are tenuous at best. More likely, he wanted the Republic of Texas to succeed as an independent nation, rather than as part of the United States. He rightly worried about U.S. imperialism expanding into Spanish territory and played an active role in keeping Florida Spanish. He would have seen the Republic of Texas as an effective buffer against American expansion as well as a viable trading partner.

The Republic of Texas was a short-lived nation established in March of 1836 when it ceded from Mexico. Following the independence of Mexico from Spain, the American Stephen Fuller Austin led a group of 300 Empresarios to settle Texas, near Austin, where they received a grant from the Mexican government. As more Americans moved to Texas, resentment and strife began to build between the American settlers and Mexican authorities. This and other factors ultimately led to the Texan Revolution in 1835 and the declaration of Texan independence in 1836. Texas remained an independent republic until it joined the United States 10 years later in 1846 - the very year this map was issued.

Roughly centered on modern day Vermillion Bay, coverage extends along the Gulf Coast from Laguna Madre, Mexico (just south of the border) to Cape San Blas, Florida. The chart offers a wealth of detailed soundings throughout. Of note are some of the river systems and inlets, which although treated minimally offer more accuracy than any previous chart. In particular, note the precise mapping of the Mississippi Delta and the complex network of bays, lakes, bayous, and rivers between Vermillion Bay and Mobile Bay, and inland as far as Natchez. The complex and extensive lighthouse system along the Gulf littoral is also detailed.

The map itself is based upon a rare Gulf of Mexico chart first issued in 1807 by Direccion Hidrografía, that organization's first published mapping of the Gulf Coast. That map was based upon the Jose Antonio de Evia (Josef de Hevia; 1740 - c. 1798) expedition (1785 - 1786). Subsequently, it went through many updates and iterations, some with different titles, but this is the only variant to name the Republic of Texas

This scarce map was drawn by Miguel Moreno and engraved by Juan Carrafa (map) and Juan Estruch (lettering). It was published for the Direccion Hidrografía, the official mapping branch of the Spanish navy. We note several examples in institutional collections, including at the Library of Congress, Yale, and the University of Texas (Arlington).

Dirección Hidrografica (1787 - 1927) was the Spanish equivalent of the British Admiralty or the U.S. Coast Survey. This organization, founded in 1787, was commissioned to produce accurate nautical charts of all waters frequented by Spanish vessels. In essence, it replaced the Casa de Contratción, which closed its doors in 1790. Like most such organizations, the Dirección Hidrografica or Depósito Hidrográfico marked a new age in Spanish maritime cartography. Rather than compile charts created by navigators, explorers, and merchants, the Direccion Hidrografica worked closely with naval and military personnel to actually visit the sites directly in pursuit of the most accurate hydrographical, astronomical, and geodetic measurements. The Direccion Hidrografica created a massive library of nautical charts that, though not nearly as common as similar nautical charts by the U.S. Coast Survey and British Admiralty, are highly desirable for the beauty of their manufacture as well as their accuracy and detail. The office was originally located on Calle Ballesta, but relocated to 36 Alcala, both in Madrid. After 1908 the Dirección was subsumed into other governmental agencies. In 1927 the Direccion was absorbed into the Institute and Observatory of San Fernando, located in Cadiz. The library of original maps, charts, and journals was transferred to the Naval Museum of Madrid - where it resides to this day. Learn More...


Miguel Moreno (fl. c. 1792 - 1845) was a Spanish cartographer and draftsman active with the Depósito Hidrográfico in Madrid during the first half of the 19th century. Hs served in the Spanish royal navy as a pilot as early as 1808. By 1807 he was producing nautical charts for the Depósito Hidrográfico. He participated in the geographical expedition to South America of Cosme Damián Churruca (1792 - 95), which included the Antilles. Moreno was widely considered the Depósito Hidrográfico's primary expert on the Gulf Coast and Puerto Rico. Learn More...


Juan Carrafa (1787 - June 19, 1869) was a Spanish cartographer and engraver active with the Depósito Hidrográfico in Madrid during the first half of the 19th century. He work primarily consists of nautical charts. Learn More...


Juan Estruch (1820 - 1883) was a Catalan line engraver active in Madrid with the Dirección Hidrografía in the middle part of the 19th century. Estruch was born in Barcelona and studied engraving under his father, Doming Estruch y Jordan (1796 - 1851) also an engraver, and at the Escuela de Comercio y Bellas Artes, gradating in 1836. He then traveled to Italy to study under master engraver D. Pablo Toschi de Parma. He returned to Spain in 1840 and by about 1845 had taken a position with the Dirección Hidrografía. In addition to his work for the Dirección Hidrografía, he completed commercial portrait and certificate engraving, and map engraving for Vincente López and Francisco Coello. By 1872 he was the first engraver a the Depósito Hidrográfico. Learn More...