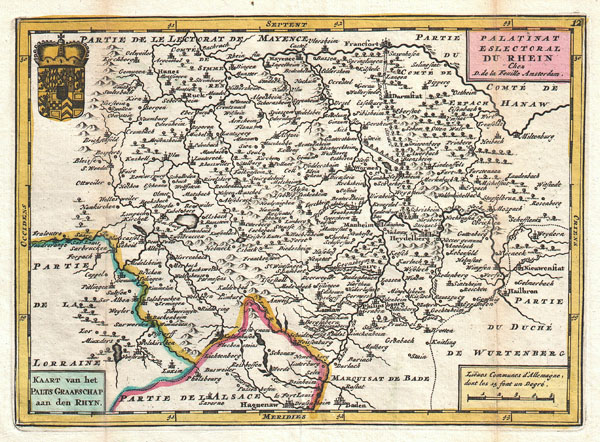 A stunning map of GermanyÂ's Rhineland first drawn by Daniel de la Feuille in 1706. Depicts from Alsace and Lorraine eastward to WÃ¼rttemberg ad northwards as far as Mainz. Names Heidelberg, Manheim, Frankfurt, Mayence, Darmstadt, Manheim and Landaw, as well as many other cities. This area, known as Rhineland-Palatinate, is known for its fine Riesling wines. French title area in upper right quadrant, Dutch title area in lower left. An armorial crest decorates the upper left quadrant. This is Paul de la FeuilleÂ's 1747 reissue of his father DanielÂ's 1706 map. Prepared for issue as plate no. 13 in J. RatelbandÂ's 1747 Geographisch-Toneel.