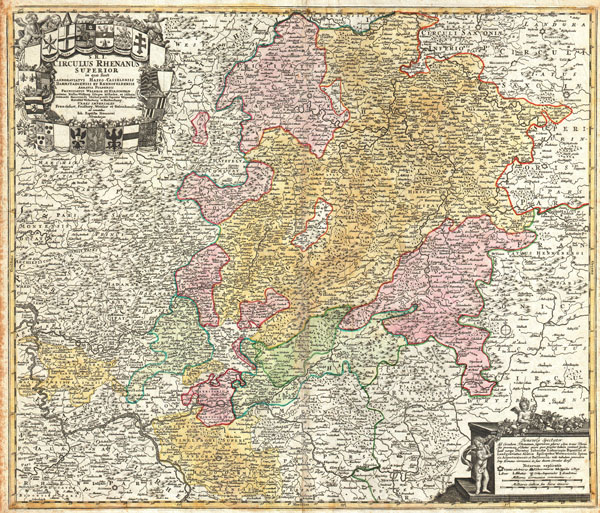 A beautifully detailed c. 1730 Homann Heirs map of Upper Rhine region. Covers from Coblentz eastward as far as Schweinfurt, Schmalkalden and Mulhausen; northwards as far as Gottingen; and southwards as far as Darmstadt and Wertheim. Includes the cities of Cassel, Hirschfeld, Fulda, Frankfurt am Oder, Darmstadt, Nassaw, and Marpurb. The map details fortified cities, villages, roads, bridges, forests, castles and topography. The title cartouche in the upper left quadrant features twenty-one heraldic crests, each representing a major city. Curiously, four are blank. Legend with cherubs in lower right quadrant. This map was drawn in Nuremberg by J. B. Homann and issued in Homann's Grosser Atlas as well as in the Homann Heirs' Maior Atlas Scholasticus ex Triginta Sex Generalibus et Specialibus…. .