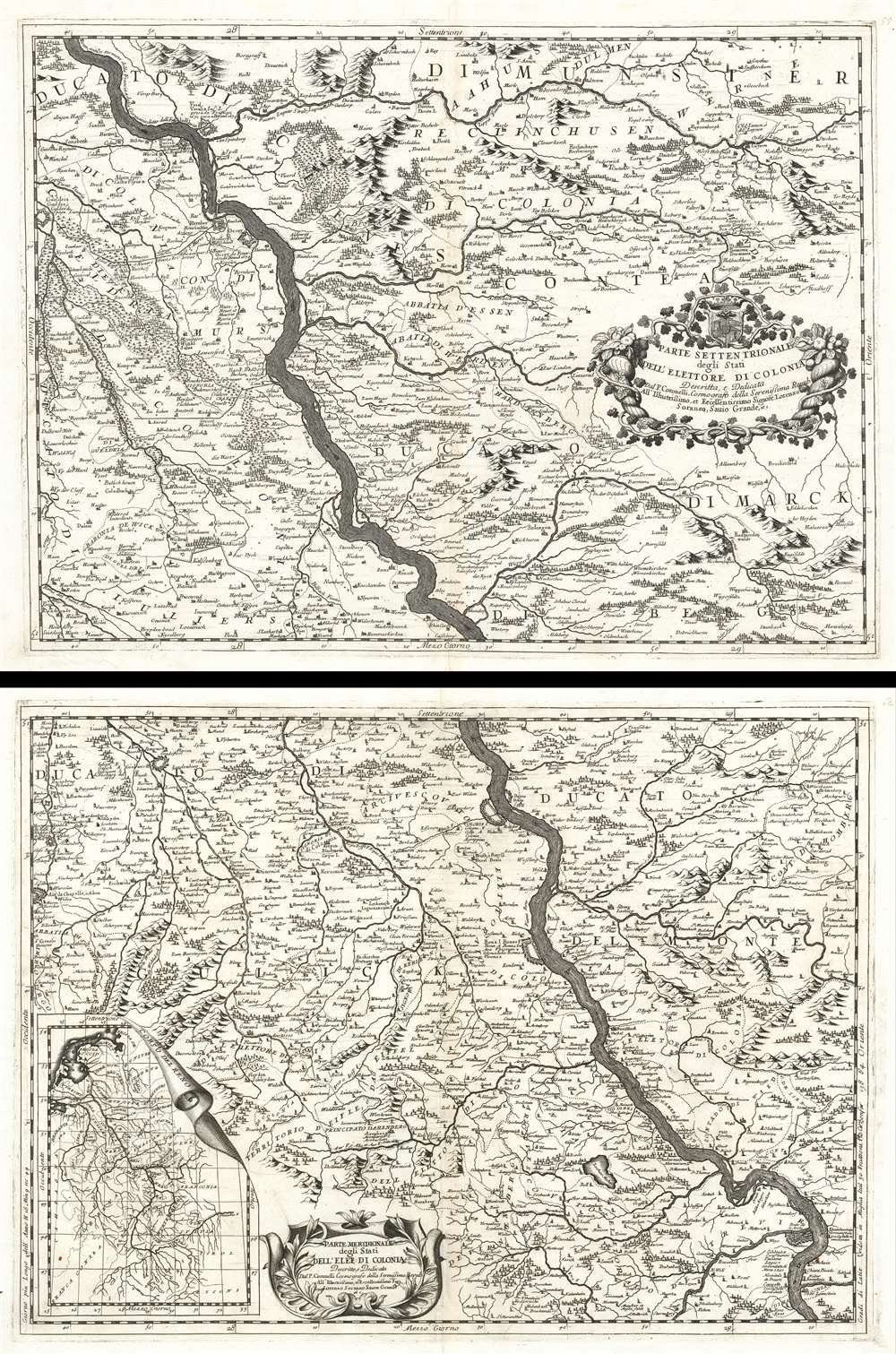 A map of the Rhine River and the Electorate of Cologne, one of the many administrative divisions of the Holy Roman Empire.
$600.00

This is a 1690 Vincenzo Maria Coronelli map of the Rhine River in northwest Germany in what was then known as the Electorate of Cologne. Presented on two sheets that can function independently, the map depicts the region along the river from Wesel to Koblenz. Numerous cities, towns, and villages are labeled along the river's course and on both sides, including Wesel, Orsoy, Cologne (Colonia), Homberg, and others. Each settlement is marked by a dot or a small collection of buildings, allowing the viewer to have some understanding of the relative size of each population center. The terrain is shown pictorially, with mountains and forests providing some idea of what the country looks like. Beautiful title cartouches are illustrated on each of the maps. An inset map of the entire course of the Rhine is situated in the bottom left corner of the lower sheet.

The Electorate of Cologne

The Electorate of Cologne was an ecclesiastical principality of the Holy Roman Empire beginning in the 10th century until the early 19th century. Based around the power of the Archbishop of Cologne, the Archbishop ruled over his temporal possessions or Hochstift as a prince-elector. Germanic tribesmen first began living at the site that became Cologne in 38 BCE, and the Romans founded Colonia Agrippina at the site in 50 AD. After nearly a millenia, Emperor Otto I of Germany appointed his brother, Bishop Bruno, as a duke, handing the archbishops of Cologne their first taste of secular power. Otto endowed his brother and his successors with the powers of secular princes. Cologne served as the capital of the electorate until 1288, when, during the Battle of Worringen, when Archbishop Siegfried of Westerberg was captured by the citizenry of Cologne and forced to declare Cologne a Free Imperial cCity to regain his freedom. After this trying experience, the archbishop fled to Bonn. Both Bonne and Cologne were occupied by France in 1794.

This map was created and published by Vincenzo Coronelli in 1690. Only one example of each sheet is recorded in the OCLC and they are part of the collection of the Bibliothèque nationale de France in Paris.

Very good. Two separate sheets. Both sheets exhibit light wear and toning along original centerfold. Both exhibit closed margin tears that have been professionally repaired on verso. Both are blank on verso.