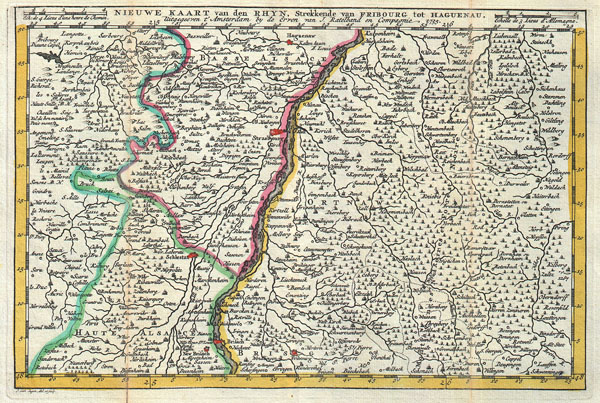 A stunning map of Alcase, France drawn by J. Ratelband in 1735. Includes both Basse Alsace and Haute Alsace. Covers from Fribourg in the northwest, eastward past Strasbourg and the Rhine River as far as Rordorff and Kilberg. Dutch language title along the top border. Engraved by Jan van Jagen for issue as plate no. 14 in J. Ratelband's 1747 Geographisch-Toneel.

Johannes Ratelband (1715 - 1793) was a European map publisher based in Amsterdam. Ratelband is a rather obscure fellow, but is known to have published a series of European maps and views in association with the La Feuille family. Learn More...


Jan van Jagen (1709 - 1800) and Carl van Jagen were active engravers based in Amsterdam. The Jagens were active throughout the 18th century and are known to have engraved maps for such prominent Dutch firms as Ottens, De La Feuille and Ratelband. Despite a fairly large corpus of work, little else is known of these elusive figures. Learn More...