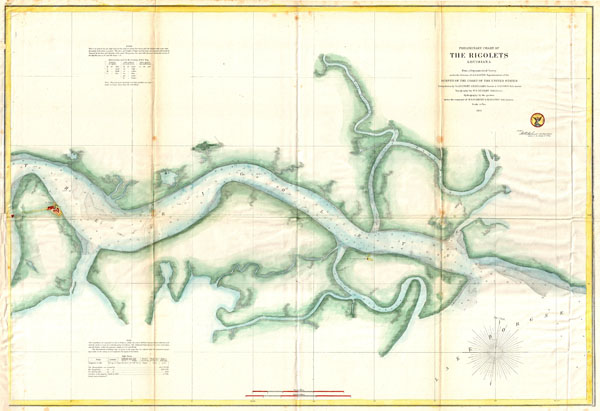 A beautiful hand colored 1859 United States Costal Survey chart or map of Louisiana's Rigolets River. The Rigolets is a river or strait that connects Lake Borgne to Lake Pontchartrain, forming in the process the boundary between New Orleans (Orleans Parish) and St. Tammany Parish. As an important deep water channel, the Rigolets was considered of strategic importance during the Civil war and consequently, Fort Pike, named here, was built to defend it. Today, the Riglolets is considered a dangers channel for Gulf of Mexico storms and there is talk of constructing floodgates on the channel. The, Rigolets Light (destroyed by Hurricane Katrina in 2005), and the Little Pearl, Little Rigolets, West Mouth and East Mouth Rivers are all noted. The Triangulation for this chart was completed by S. A. Gilbert, J. E. Hilgard, and S. Harris. The topography is the work of W. S. Gilbert. The Hydrography was accomplished by W. S. Gilbert and M. Seaton. The whole produced under the supervision of A. D. Bache for inclusion in the 1859 Superintendent's Report.

Report of the Superintendent of the United States Coast Survey, Washington, (1859 edition).

Good. Some wear, verso repair and reinforcement, and toning along original fold lines.
Looking for a high-resolution scan of this?