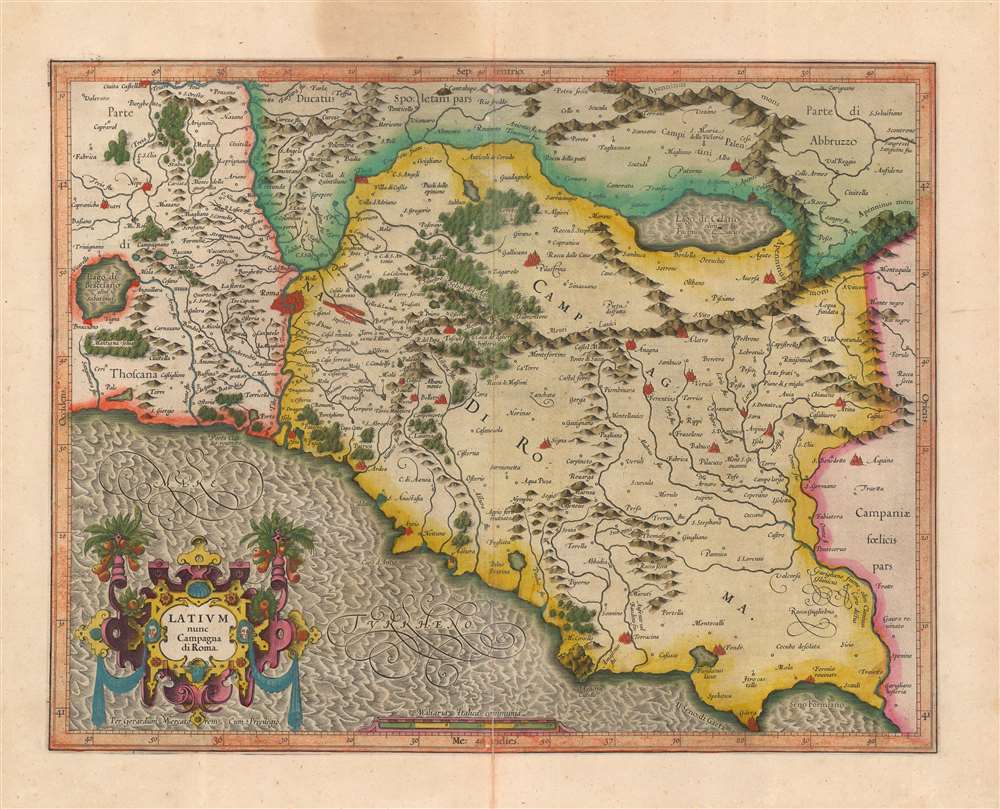 A Beautifully Engraved map of Lazio and part of Abruzzo, Italy.
$850.00

A beautiful, original color example of Gerard Mercator's map of central Italy, focusing on Rome and the Roman Campagna. The superb engraving is the work of Mercator himself, most notable in the water areas, the elegant strapwork cartouche, and the precise Italic lettering. Forests and mountains are shown pictorially. Towns are illustrated with simple marks, although larger cities are shown as clusters of houses heightened in red color. These of course include Rome, but also Ostia, Alba, Palestrina, Formia, Terracina, and others. Also marked in red, to the east of Rome, is one of the ruined Roman aqueducts. Rivers are pictured in detail.

At the western extreme of the map is shown Lake Bracciano. This volcanic lake remains an important tourist attraction, as well as being a key reservoir for the city of Rome. At the northeastern corner of the Roman Campagna is shown a larger lake - the Lago di Celano, also known as the Fucine Lake. This great endorheic lake was the third largest lake in Italy, and would remain so until it was drained in 1878 (thus producing one of Italy's most fertile plains.)

This map was engraved by Gerard Mercator for inclusion in his Atlas in 1589. Beginning in 1606, it was among the plates purchased by Jodocus Hondius for use in his own edition of the Atlas. This specific example appeared in the second Hondius edition of 1607 - 1608. The map remained in all subsequent editions of the book until it was replaced by Jansson in 1635. Consequently, it is well represented in institutional collections. Two examples from this specific edition are cataloged in the Bayerische Staatsbibliothek and the Biblioteca Nacional de Espana.

Hondius, J., Gerardi Mercatoris Atlas sive Cosmographicae Meditationes de Fabrica Mundi et Fabricati Figura, (Amsterdam: Hondius) 1607.     Mercator's Atlas is one of the most important works in the history of cartography. Although in fact Ortelius was the first to publish a proper atlas, the Teatrum Orbis Terrarum, Mercator's Atlas the first book to employ the term Atlas for a collection of maps. The term is derived both from the mythical titan, Atlas, who was forced to bear the world upon his shoulders, and the Libyan king, philosopher, and astronomer of the same name that, so the legend goes, constructed the first globe. Mercator dedicated the final 25 years of his life to compile the Atlas. He published two parts during his lifetime in 1585 and 1589, but the final part published posthumously by his son Rumold Mercator, in 1595. The map plates for the Atlas were later acquired by Jodocus Hondius who published the most complete and well known edition in 1606. It was Jodocus who popularized the Atlas and who did the most to elevate Gerard Mercator's work.

Very good. Old reinforcement of lower centerfold; some scuffing at top and bottom of centerfold: else excellent with a sharp strike and rich original color.