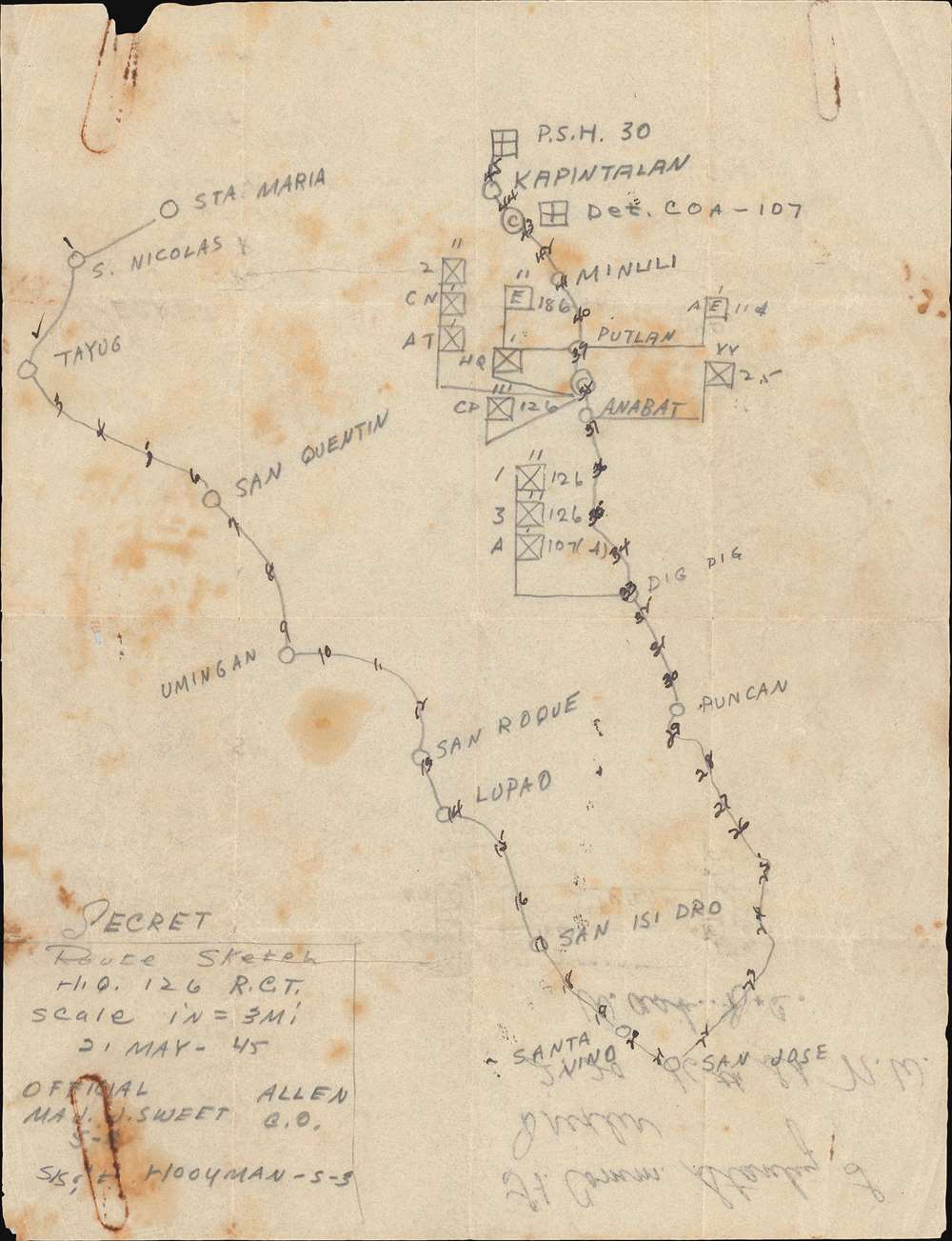 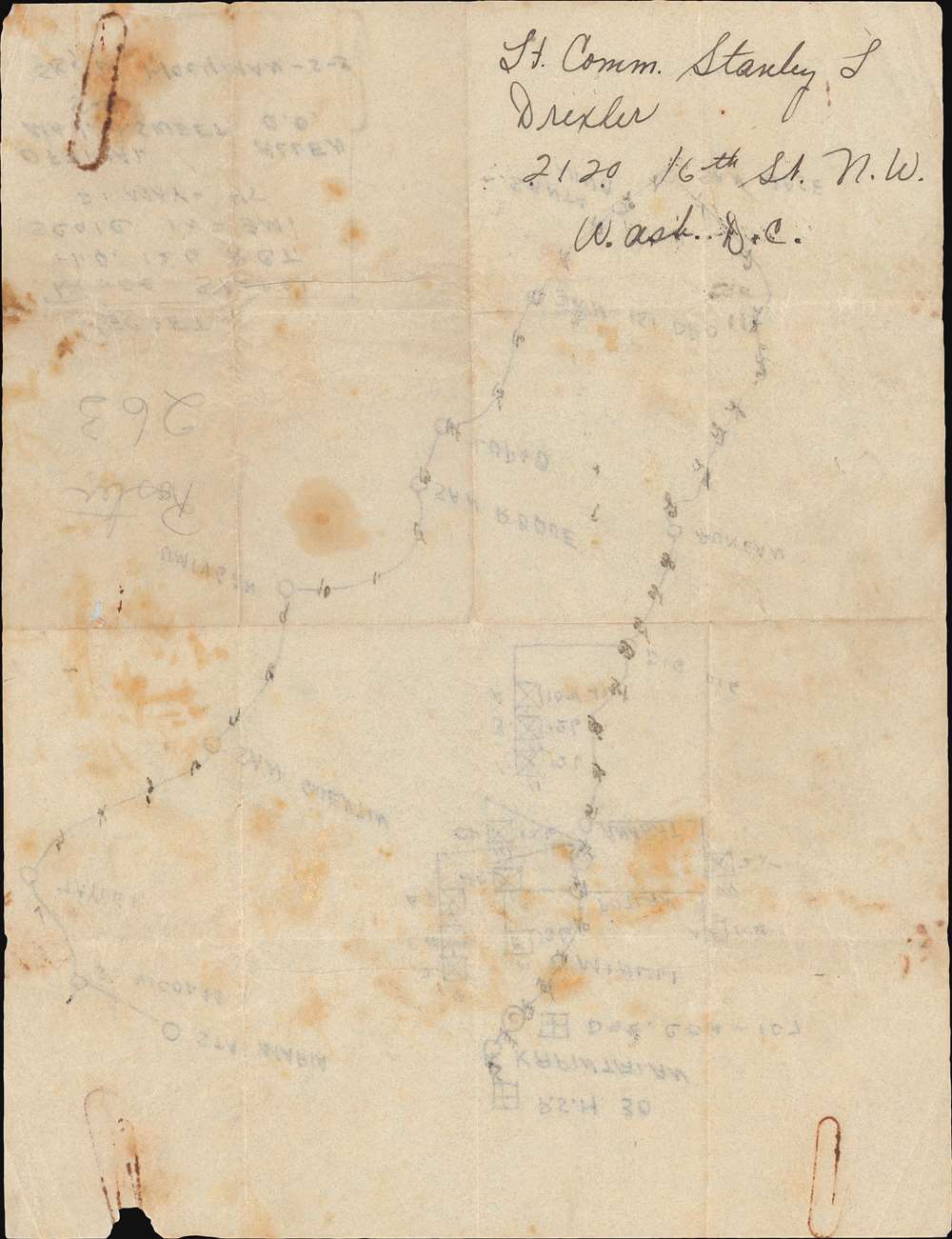 'SECRET' maneuvers to outflank the Japanese during the WWII Battle of Luzon.
$1,200.00

An ephemeral and rare find, this is a 'SECRET' 1945 World War II manuscript 'route map' of the Philippines drawn for the Battle of Luzon Villa Verde Trail, May 21, 1945. Drawn by Major John Sweet, the map traces the 126th Infantry Regiment's movement around a ridge in central Luzon to outflank the Japanese on the Villa Verde Trail.

Labeled 'SECRET' as it was drawn when this information was of the utmost military sensitivity, coverage encompasses parts of the modern-day provinces of Ilocos Region, Cagayan Valley, and Central Luzon. Sweet notes the regiment's progress mile by mile and labels cities and towns they encounter. Among these are Santa Maria, Tayug, Umingan, Lupao, and San Jose. Sweet also marks the regiment's headquarters, command post, and individual battalions, as well as the location of two engineer battalions. The route south to San Hose follows the Tayug - San Quintin Road and the San Jose - Umingan Road. The route north from San Jose closely follows today's Pan-Philippine Highway.

The 32nd Division (of which the 126th was a part) landed at Lingayen Gulf in January 1945. It was tasked with holding a defensive line north of the XIV Corps as it raced toward Manila. A large Japanese force occupied northern Luzon and threatened American positions to the south. Once Manila was liberated, divisions were tasked with attacking the Japanese positions in northern Luzon. The 32nd Division was assigned three river valleys and the Villa Verde Trail, an area that transitioned from plains to mountains. The assault started on February 25 along the Ambayabang River. The division soon encountered fierce fighting, at times so intense progress was measured in inches. This continued through March, April, and May, with the 32nd Division suffering ever-mounting casualties. The final phase of fighting, which the present map describes, took place from May 5 through May 31 along the Villa Verde Trail itself. The operation to clear the Villa Verde Trail cost the 126th Infantry Regiment dearly. In total, the 32nd Infantry Division suffered 2,985 casualties during this operation.

This map was drawn by Major John Sweet on wax paper, likely while in the Philippines and possibly even during the Villa Verde Trail operation. He then mailed it to Lieutenant Commander Stanley L. Drexler in Washington, D.C. As this is a manuscript map, this piece is unique.

John Emmett Sweet, Jr. (December 11, 1915 - November 24, 1984) was an American businessman and World War II veteran. Born in Sandusky, Ohio, Sweet graduated from high school in Montrose, Pennsylvania, and attended Lehigh University where he studied metallurgical engineering. He graduated from Lehigh in 1939. Sweet was an officer in the Army Reserve Corps and was called to active duty in January 1942 as a lieutenant. He arrived in Australia in the fall of 1942 and joined the 32nd Division. He and the 32nd Division first saw combat in New Guinea in September 1942. He was awarded the Distinguished Service Cross on for supervising the construction of a bridge under enemy fire during the Buna Campaign in Papua, New Guinea, in December 1942. He spent four years in the Southwest Pacific and fought in numerous campaigns: Buna, Saidor, and Aitape, New Guinea; Morotai, Dutch East Indies; and Leyte and Luzon in the Philippines. By early 1945 he had risen to the rank of Major and was a staff officer of the 126th Infantry Regiment. He was aware the Bronze Star for 'meritorious achievement' on Leyte. Sweet arrived back in the United States in late November 1945. After the war he founded the Tioga Foundry Corporation in 1946 in Oswego, New York. It produced gray iron castings. At its height in the late 1970s, Tioga employed over 200 people. Sweet and Tioga were the first company in New York State to comply with new federal regulations concerning air pollution from smokestacks. He served as its C.E.O. until 1979 and president until 1983. He married Eunice Bowen with whom he had one son. The Tioga foundry closed on October 2, 1987. Learn More...