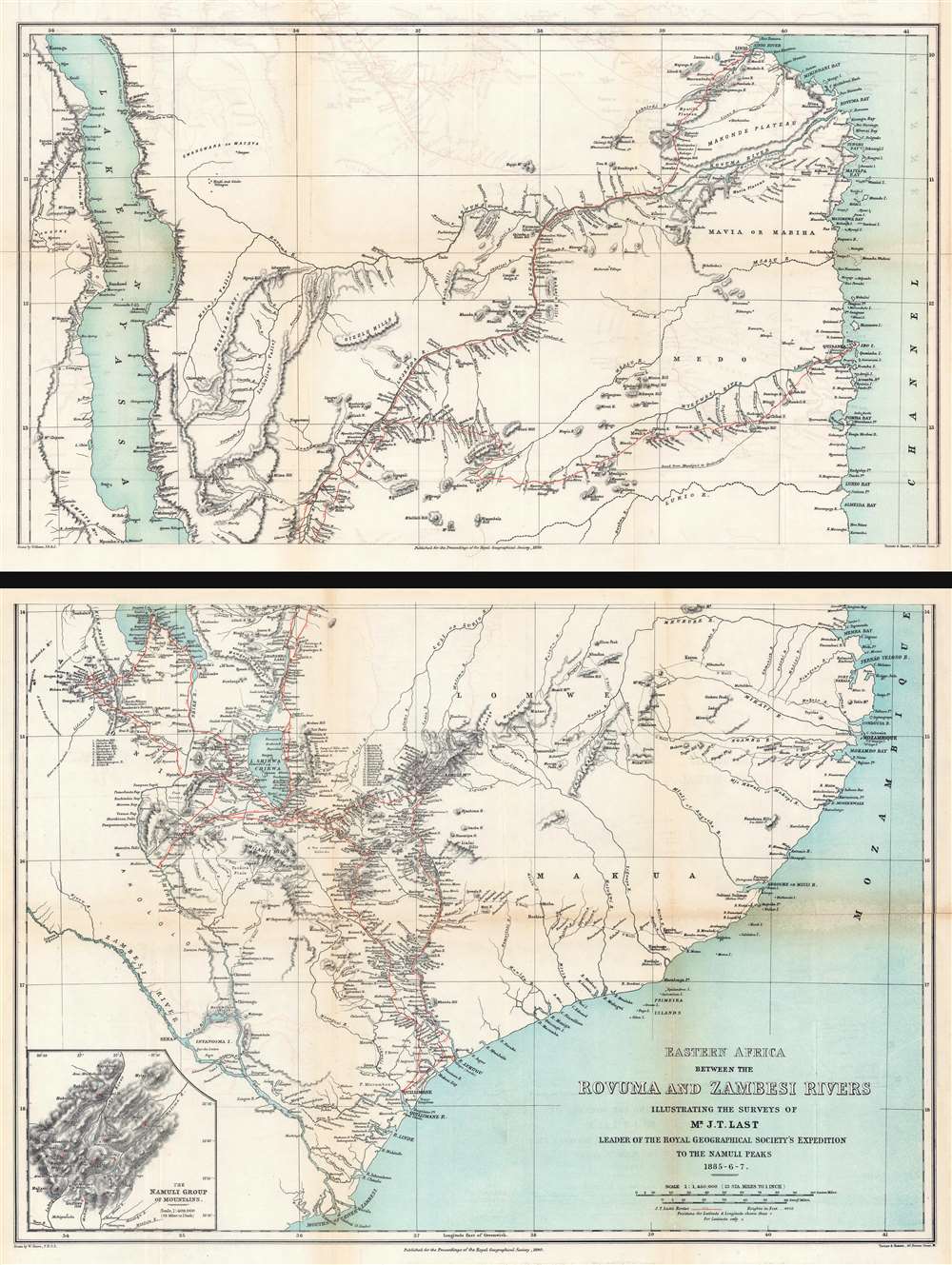 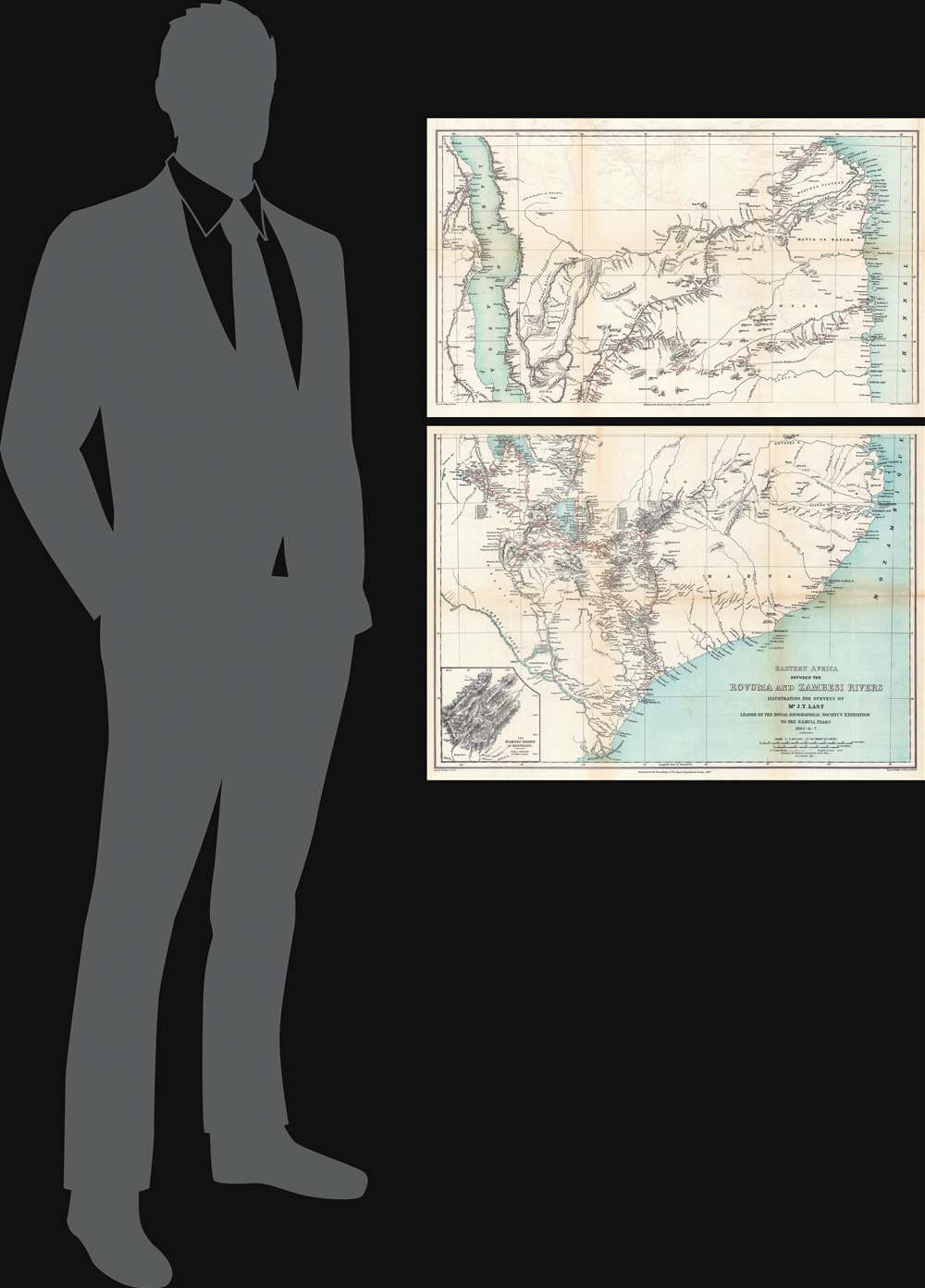 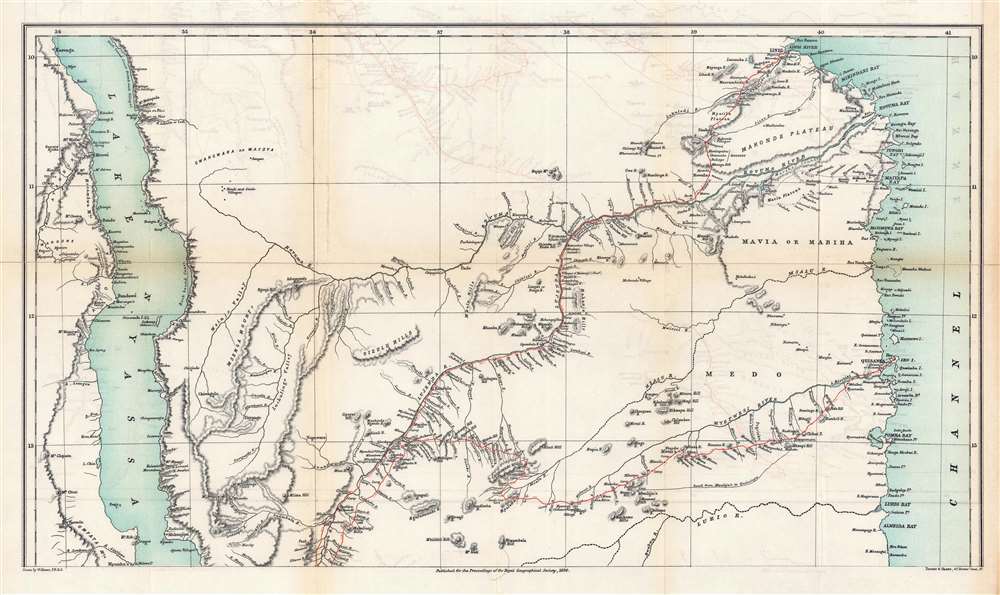 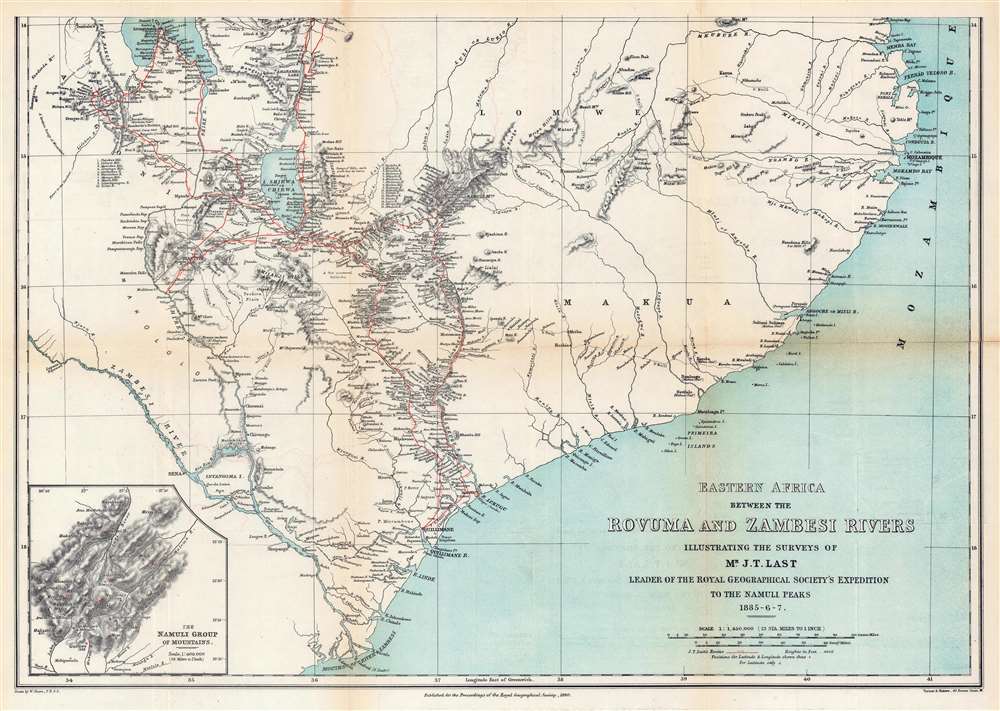 Exploration of Mozambique and Malawi.
$950.00

Lines on the Map

Red lines trace Last's treks and dots mark his camps as well as the locations where he took geopositioning measurements. Many other locations are labeled throughout, although, even with the amount of detail presented here, the large swaths of unexplored territory, remain striking. Rivers throughout are identified, including the Lujenda, Rovuma, Lukugu, and Zambezi. Lake Nyasa/Malawi and Lake Shirwa are prominently illustrated. An inset of the Namuli Mountains, Last's chief objective, is situated in the lower left.

The Creation of the Map

Last's original maps, per the Proceedings of the Royal Geographical Society were executed in manuscript and covered seven sheets at a scale of 1 : 550000. The present map retains all positions noted on Last's work and also includes Henry Edward O'Neill's (1848 - 1925) routes. When creating the map, the latest Admiralty charts were consulted to define the coastline although Last made a few updates in the area around Quillimane.

While the official purposes of the Last Expedition ostensibly scientific, there can be little doubt that it was planned as vital reconnaissance for potential British colonial move on Portuguese East Africa. Per an article in the April 1890 edition of the Proceedings of the Royal Geographical Society

The chief objects of the expedition, as stated in the instructions given to Mr. Last, were to make a survey of the Namuli Peaks, and to study the climate and economic products of the district, and the character and languages of the native tribes. He was also to determine by accurate observations the position of the junction of the Lujenda and Rovuma, and in traveling thence to the Namuli Hills, to take the hitherto unexplored native caravan route through the Medo country, visiting also the Mavia people, and, if he visited Lake Shirwa and the Scottish Mission station of Blantyre, he was to connect his survey with that of Mr. Consul O'Neil. Finally, he was to return to the coast by way of the Lukuga Valley, and thence proceed to Mozambique.

The British never formally invaded Portuguese East Africa - maybe Last found little to recommend it? - but British merchants and business people from nearby Rhodesia and South Africa were increasingly active in the region in the late 19th and early 20th centuries.

This map was drawn by William Shawe based upon the maps of Joseph Thomas Last and published by the Royal Geographical Society in 1890. An example is cataloged in OCLC and is part of the collection at the University of Chicago.


Joseph Thomas Last (December 25, 1848 - December 13, 1933) was an English missionary, naturalist, and explorer. Born in Tuddenham, Suffolk, Last was ordained at the Church Missionary College in 1872. He set out for East Africa for the first time in October 1874 and established a mission at Kisulutini, East Equatorial Africa. He returned to Britain in 1876 for unknown reasons before being sent back in November 1877. He was then appointed to the Usagara Mission in Mpwapwa, and in 1880 went on to found a new mission in the Nguru Mountains at Mamboya. He returned to Britain in December 1884 after living in Africa for seven years. Shortly thereafter, in 1885, he was engaged by the Royal Geographical Society to explore the Namuli Mountains. That expedition lasted until April 1887. In 1897, he was appointed Commissioner of Slavery for the Island of Zanzibar. He married his first wife, Annie Jackson, in September 1880. Jackson joined him in Africa and became the first European woman to reside at the Nyanza Mission. Jackson died in 1883. At some point Last remarried, although it is unknown when. Last died in 1933 and is remembered as 'a man of robust and virile personality' who possessed 'an unrivalled knowledge of Swahili'. He is also remembered for his contributions to conchology, having collected countless specimens in his travels, some of which have never been recollected. Learn More...