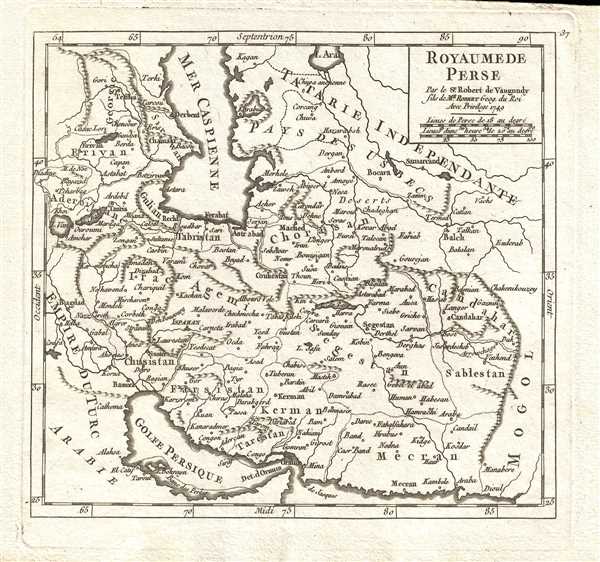 Map of Iran and Central Asia depicting Isfahan and Kandahar.

This is a 1749 Didier Robert de Vaugondy map of Iran and Central Asia. The map depicts from the Ottoman Empire (Iraq) to the Afghan/Indian border and from the Aral Sea and the Caucasus to the Persian Gulf. The Ottoman Empire (Empire du Turc) and Arabia dominate the left side of the map, although Azerbaijan and Georgia are labeled. Iraq (Irac) is labeled, and Baghdad (Bagdad) is present very close to the left border. The Caspian Sea functions as the focal point of the map, descending from the upper border through approximately one third of the map. The Aral Sea is depicted along the top border, but here it is referred to as a lake.

Central Asia is labeled as 'Independent Tartary' (Tatarie Independante) which is comprised by Uzbek Country (Pays des Usbecs). Khorasan (Chorasan) and the great city of Balkh (Balch) are both labeled. The Ancient Greeks knew Balkh as Bactra, and Marco Polo referred to Balkh as 'a great a noble city.' Kandahar (Candahar), one of the major cities in modern Afghanistan, functions here as the name of a city and a region.

In Persia, what is now modern-day Iran, several key cities are labeled. Isfahan (Ispahan) is labeled in bold, block lettering, declaring it's importance to the region. It twice served as the capital of the Persian dynasties, and was particularly respected during the 16th and 17th centuries. Alas, in 1775, the capital was moved from Isfahan to several cities, before finally staying in Tehran. Hormuz (Ormus) and the Strait of Hormuz are both labeled here. The Strait of Hormuz functions as a bottleneck into the Persian Gulf (Golfe Persique), making it one of the most strategic locations in the world today.

Several rivers are depicted, although none of them are labeled. Political divisions are presented through dotted lines, as on all the maps in Vaugondy's Atlas Universel, Portatif et Militaire. Several smaller lakes are labeled, including Lake Van and Lake Chahi as are myriad cities and towns.