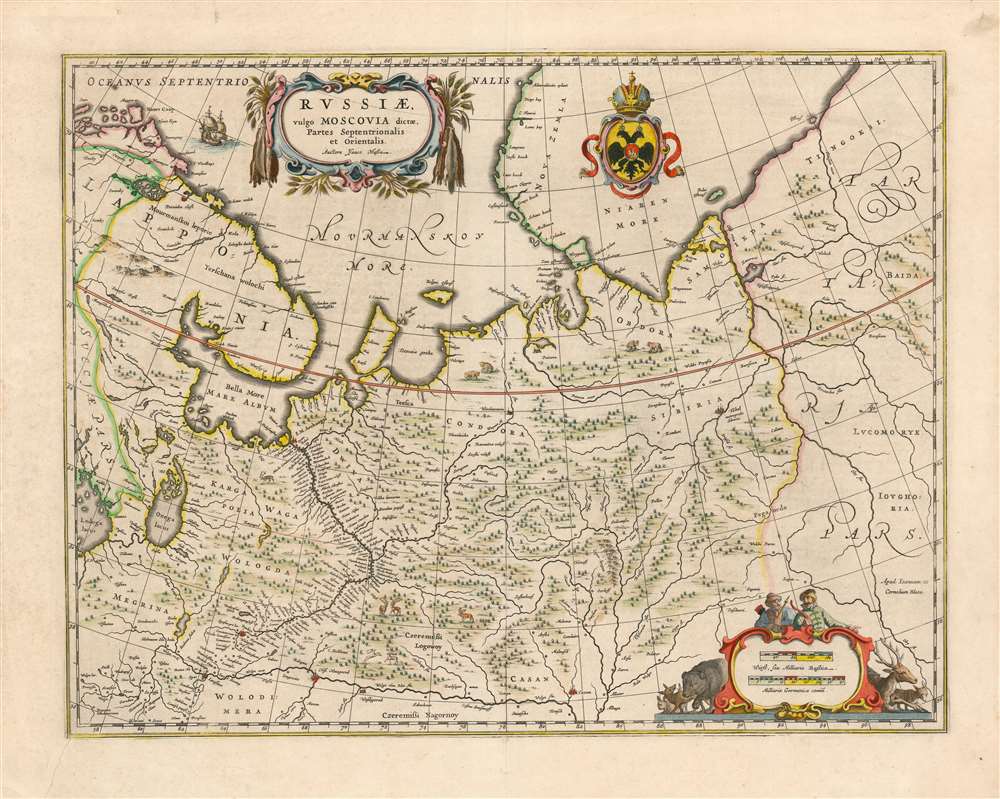 A beautifully excecuted and detailed map of the Dutch trade routes into Russia.

This is a beautiful example of Blaeu's 1640 map of Muscovy north of the Volga, and the Northernmost parts of Russia. It was derived primarily from the geographical information of the Dutch trader and diplomat Isaac Massa, whose experience in Russia during the Time of Troubles remained the best firsthand source on Russian society and Geography well into the 17th century. The granular detail for the trade route from Archangel on the White Sea to Yaroslavl testifies to Massa's years in the region, working to secure trade for textiles and grain both for the Netherlands and for Sweden. The whole of this route, following the Dvina to the Sukhona Rivers and on to the portage between Vologda and Yaroslavl on the Volga shows more than a hundred towns which would have been familiar way stations on the long river journey.

Although the coastline had been explored at the end of the 16th century by Dutch expeditions led by Cornelius Ney and charted by Jan van Linschoten, the Dutch had remained largely ignorant of what lay beyond the shore. (This region, on Linschoten's beautiful chart bears the arms of the Lithuanian Republic.) Massa's geography, first committed to print by the Dutch mapmaker Hessel Gerritz and then rapidly disseminated throughout Amsterdam's mapmaking community, provided the first useful maps of Northern Russia's river systems between the Dvina and the Ob. Though Dutch attempts at a northeast passage had been repeatedly stymied by the ice floes of the Kara Sea, Massa's work at comprehending the Russian riverine routes came at a welcome time: the Dutch and the English were vying for influence in a tumultuous Russia which - though it shared the same continent - was in many respects as distant and ill-understood by western European geographers as Africa, or America.

This map first appeared in the Blaeu atlas in 1640; this example appeared in a Dutch edition of Joan Blaeu's four-volume Toonneel des Aerdrycks, ofte nieuwe Atlas as early as 1642.