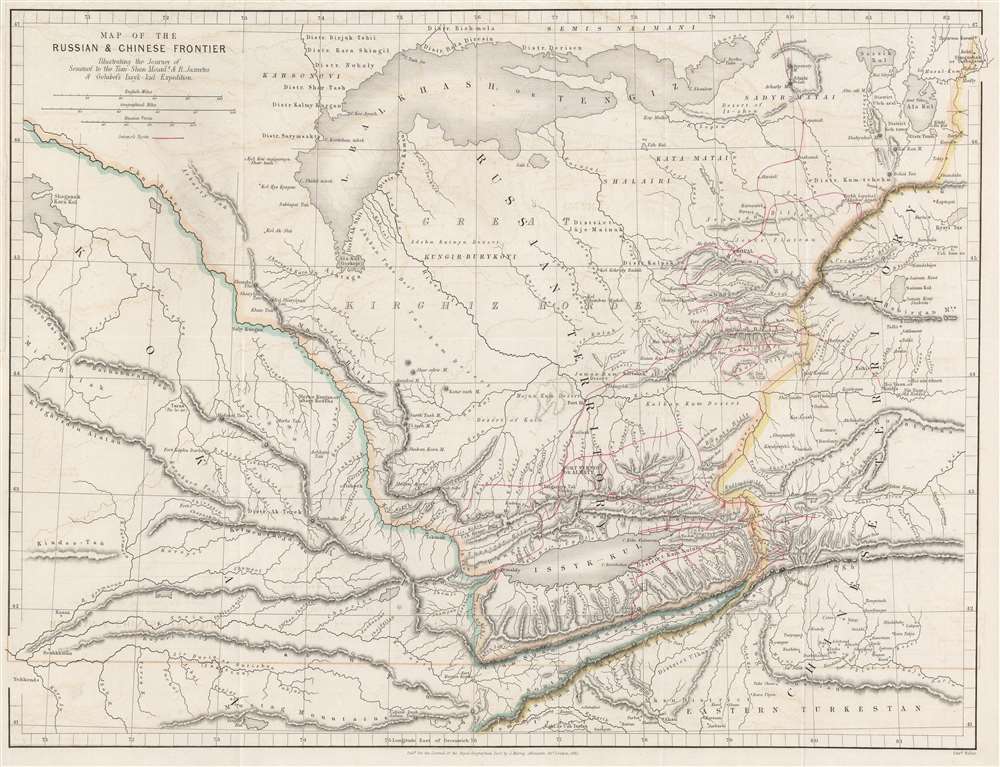 The first European expedition into the Tian Shan Mountains.
$575.00

This is an 1861 John Murray map of Central Asia tracing Pyotr Semyonov's (1827 - 1914) first European ascent into the Tian Shan Mountains. The map depicts the region from Lake Balkash south to the Tian Shan Mountains, encompassing modern-day Kyrgyzstan, Kazakhstan, and western China - at the time considered one of the most remote and inaccessible parts of the world.

The Semyonov Expedition to the Tian Shan Mountains

A red line traces the Russian mountaineer Pyotr Petrovich Semyonov Tyan-Shansky's (Пётр Петрович Семёнов-Тян-Шанский; 1827 - 1914) 1857 expedition into the heart of the Tian Shan Mountains, which he undertook at the suggestion of the German naturalist Alexander von Humbolt (1769 - 1859), under whom he studied geography in Berlin. Pyotr visited the Eastern Kyrgyzstan Lake Issyk Kul, the world's second-largest saltwater lake, and then explored the interior of the Tian Shan Range. He became the first European to look on the dramatic Tengri Tag (Mountains of Heaven) panorama and see the second highest peak, Khan Tengri. Semyonov published the first systematic description of the region in 1858 to immediate international acclaim. His monograph was so influential and career-defining that fifty years later Czar Nicholas II of Russia authorized Semyonov to 'Tian-Shansky' (of the Tian Shan) to his name.

This map was created by John Murray and engraved by Edward Weller for publication in Volume Thirty-One of The Journal of the Royal Geographical Society in 1861. The present map is extremely scarce and is not cataloged in OCLC.

Sir John Murray (March 3, 1841 - March 16, 1914), considered to be the father of modern oceanography, was a British oceanographer, limnologist, and marine biologist. Born at Cobourg, Canada West, Murray attended school in London, Ontario, and later Cobourg College. He returned to Scotland in 1858 (his parents had emigrated from Scotland to Canada around 1834) to continue his education at Stirling High School and live with his grandfather. He enrolled in the University of Edinburgh in 1864 with the intention of studying medicine, but did not finish his studies and did not graduate. Instead, he joined the crew of a whaling ship, the Jan Mayen, as the ship's surgeon and spent the seven-month voyage collecting marine specimens and recording data on ocean currents, ice movements, and the weather. He returned to Edinburgh later that year and reenrolled at the University to study geology, graduating in 1872. That same year, Murray joined the Challenger Expedition as a naturalist and spent the four-year voyage assisting in the research conducted of the oceans. After the expedition's return, Murray was made a Chief Assistant at the Challenger offices and he managed and organized the expedition's collections. He became Director of the office in 1882 after the death of the expedition's chief scientist, Charles Wyville Thomson, and published The Report on the Scientific Results of the Voyage of HMS Challenger in 1896, which consisted of more than fifty volumes. Murray established the Marine Laboratory at Granton, Edinburgh in 1884, the first laboratory of its kind in the United Kingdom. The late was moved to Millport in 1894 an became the University Marine Biological Station, Millport, which is known today as the Scottish Association for Marine Science. Murray proposed an oceanographic expedition of the North Atlantic in 1909, and agreed to pay all the expenses. The Norwegian government in turn lent him the research ship Michael Sars and its scientific crew. The expedition was joined by Norwegian marine biologist Johan Hjort and set out in April 1910. It spent four months taking physical and biological observations at all depths between Europe and North America and Murray and Hjort published The Depths of the Ocean with their findings in 1912, a book that became a classic for marine naturalists and oceanographers. Murray was killed on March 16, 1914 when his car overturned ten miles west of his home. Learn More...