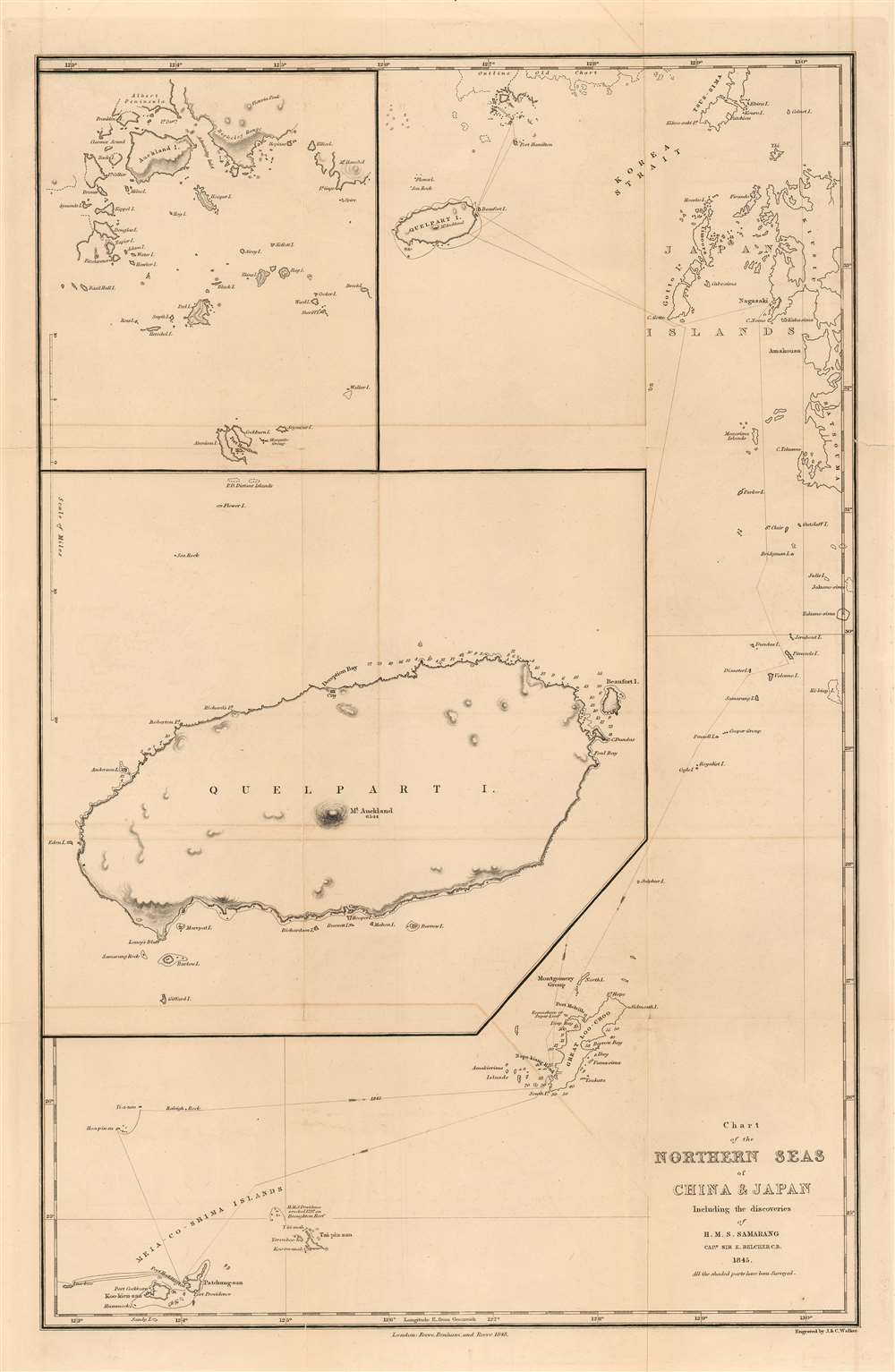 The Earliest Scienific Charting of Okinawa and the Ryukyu Islands

This is an extremely rare 1848 Edward Belcher nautical map of the East China Sea, presenting the first scientific survey of the Ryukyu Islands and Okinawa (沖縄本島), Jeju Island (제주도) and Goheung Island (거금도). It was the result of the 1843-46 voyage of Captain Sir Edward Belcher aboard H.M.S. Samarang, which was noted and celebrated not only for thoroughly surveying the islands but also for conducting detailed socio-political and natural studies of them. Belcher was already a famous man prior to this expedition, having been knighted for his service in the First Opium War and having produced the first British survey of Hong Kong harbor. Belcher's expedition aboard the Samarang was explicitly intended to survey the approaches to the five Chinese ports that had been opened to the British in the 1842 Treaty of Nanking, which marked the end of the war.

Belcher's entire voyage of discovery in the East China Sea is captured within the bounds of this chart. H.M.S. Samarang is shown entering and leaving the survey area in the southwest corner of the chart, stopping at 'Port Haddington' on Yaeyama island, here named 'Pa-tchung-san.' From there, the ship's track strikes north to the Senkaku Islands before heading east to 'Great Loo-Choo,' which is Okinawa Island. In 1787 La Perouse had charted the island of Kume but only having seen the island, not visited; and he had not charted the main island of Okinawa at all.

Belcher then sailed north to Goto Island. From there, he turned west to circumnavigate Jeju Island, (Quelpart, on the chart) making a sufficiently detailed survey of the northern coast so as to require the large, detailed inset chart dominating this piece. This represents the first accurate charting of Jeju, La Perouse's charting again having only been partial, and based on a sighting and not a survey.

Belcher went further north to chart an archipelago on the southern Korean coast, chiefly Goheung Island,(which Belcher named 'Auckland Island' on this chart) and Geomundo (거문도) (which he named Port Hamilton). The detailed survey from this part of the voyage is recorded on the chart's second inset.

H.M.S. Samarang's course backtracked to Japan, stopping at Nagasaki before returning to Okinawa; Belcher's route runs through the northern arc of the Ryukyu islands running from Kagoshima to Okinawa, thereafter returning via Yaeyama.