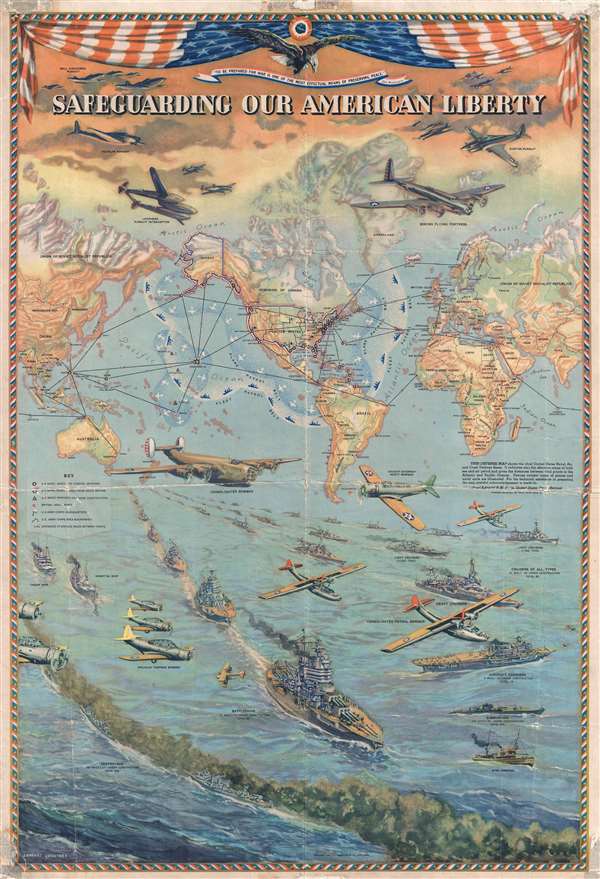 This is a 1941 Lambert Guenther propaganda broadside map of the world extolling American defensive preparedness on the brink of World War II. This broadside was issued to promote the belief that, even as war raged across the globe, the United States was capable of defending itself and projecting that defense much farther than its territorial borders. A world map centered on America serves as the broadside's main focal point and promotes the United States' defensive posture. Two 'patrol belts', the Plane Patrol Belt and, further from the coast, the Fleet Patrol Belt, are illustrated. These patrol belts allowed American forces to project farther out into both the Pacific and Atlantic Oceans to aid in the early detection of any potential attack. Cities throughout the United States, including Washington, D.C., New York, San Francisco, and New Orleans are labeled, along with countries and capital cities throughout the world. It is worth noting that Manchukuo, the puppet state created in Manchuria by Imperial Japan in 1932, is labeled. U.S. naval bases, along with those leased from Great Britain, are noted, along with U.S. Army Corps of Engineers areas of operations within the United States. British naval bases are also depicted. Distances between global cities are noted. A key along the left border explains the various notations employed on the map.

American air and sea forces are illustrated above and below the map. Above the map, the Bell P-39 Airacobra, the Lockheed P-38 Spitfire, the Curtiss P-40 Warhawk, the Douglas A-20 Havoc, and the celebrated Boeing B-17 Flying Fortress are illustrated above the map. These aircraft are accompanied by the Stars and Stripes, which frames the top of the poster, along with the quotation, 'To be prepared for war is one of the most effectual means of preserving peace,' which is attributed here to George Washington. Below the map, the Consolidated B-24 Liberator occupies center stage. The Vought-Sikorsky SB2U Vindicator, the Douglas TBD Devastator, and the Consolidated PBY Catalina accompany the Liberator above the fleet. The fleet stretches out along the bottom third of the broadside, creating a feeling of dominance and superiority. Each class of ship is labeled, and below the label the number built and the number under construction are included. The battleships are the focus, and before World War II, were believed to be the key to naval victory. Fifteen of these gigantic vessels had been built and seventeen were under construction, per the broadside. Surrounding the battleships are the heavy cruisers, light cruisers, destroyers, submarines, and aircraft carriers. Aircraft carriers had not yet showed their dominance in naval combat, and thus were not seen to be the jewels of the fleet they would become. Carriers even had their detractors in most of the world's navies, although that opinion would change. Minesweepers, troop ships, and hospital ships are also illustrated.

This broadside was created by Lambert Guenther and published Caleb Stillson Hammond and Company. It was prepared especially for Thom McAn Shoe Company.