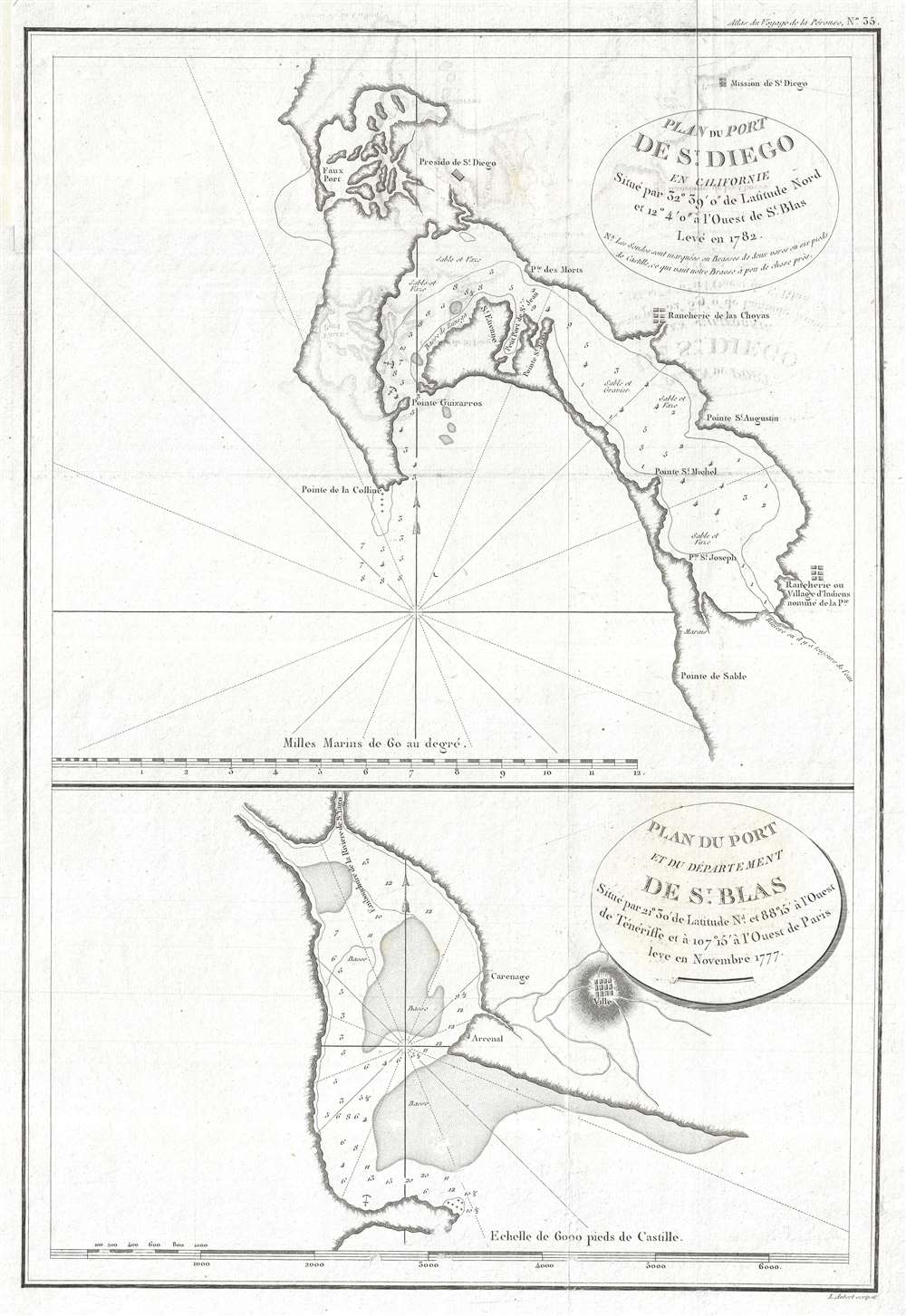 The earliest obtainable printed map of San Diego, preceded only by rare maps by Dalyrmple and a few other equally unobtainable works. This map of San Diego was issued for the atlas of Jean-François de Galaup, Comte de La Pérouse's, voyages. The image consists of two maps on a single sheet. The upper map focuses on San Diego Bay, covering from Mission Bay to roughly the Tijuana River, although that river is not shown. The Presidio de St. Diego is identified roughly on the site of the modern day city of San Diego. Further south, near National City, the Ranchiere de la s Choyas is noted. Further south still, near the modern day Otay River, an American Indian village is noted. Cartographically this map is derived from the maps of Don Juan Pantoja y Arriola, a Spanish sea captain active on the Acapulco-Manila route in the late 18th century. In addition to crossing the Pacific, he made several coastal runs to San Diego, Monterray, and San Francisco, among other locations on the California coast – where he also completed surveys. Somewhere along this route he must have met La Perouse, who was then surveying the western coast of America, and passed on manuscript versions of his surveys. These found their way into La Perouse's journals and were subsequently published posthumously in Paris. La Perouse probably never actually entered into San Diego Bay and relied solely on Pantoja's manuscript charts for his information.

The second map illustrates San Blas, Nayarit, Mexico. It too follows the cartography of Pantoja although much has changed since this port was surveyed. The excellent harbor has largely silted up and the town of San Blas has expanded significantly into the harbor area displayed here.

La Perouse died tragically on a shipwreck near the Solomon Islands. His journals were shipped back to Europe from Australia before the shipwreck and posthumously published in 1797, along with an accompanying atlas volume, from which this map was drawn, Atlas du voyage de La Perouse. A similar looking map was published by the order of Mexican president Guadalupe Victoria in 1825, but is vastly updated over the present original publication.