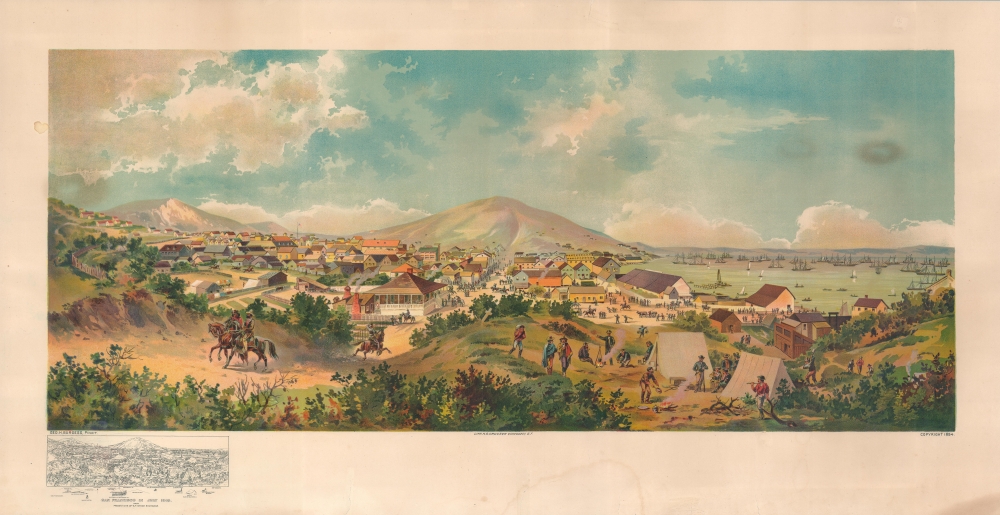 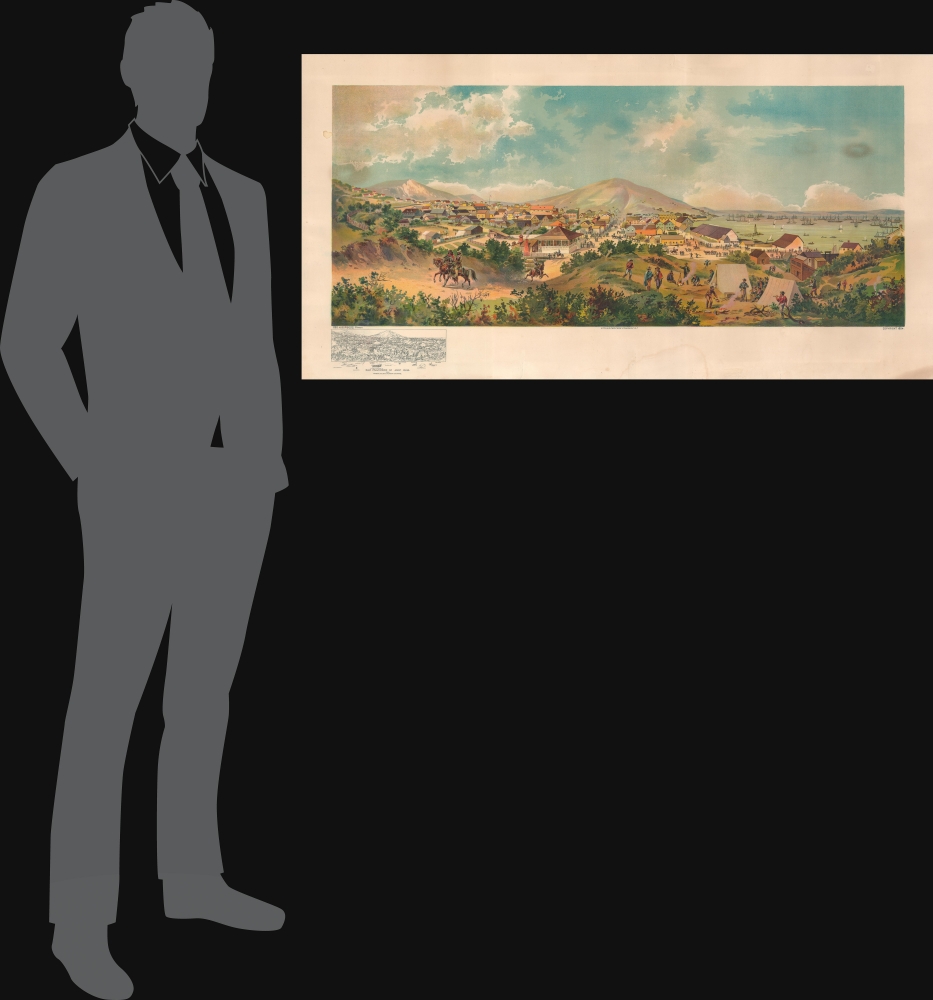 A fine 1894 chromolithograph George Henry Burgess view of San Francisco depicting the city in 1849, at the height of the California Gold Rush. Burgess drew this view based on sketches drawn from life in 1849, shortly after his arrival in San Francisco. He compiled these into a painting in 1891. It was transferred to lithographic stone, as here, in 1894. The view looks westward along Montgomery Street with Telegraph Hill prominent in the distance. A temporary camp of newly arrived 49ers fills the foreground, with two mounted Californios riding out of town at left. New construction and warehouses occupy the center, with the busy harbor at right bringing in waves of 49ers. This is essentially today's Financial District. There is a key to the map in the lower left, identifying all prominent locations throughout the growing city.

The discovery of Gold at John Sutter's mill by James Wilson Marshall (1810 - 1885) in January of 1848 was one of the most definitive moments in American history. Coming at the end of the Mexican-American War (1846 - 1848), the timing of the discovery could not have been more propitious. The combination of new seemly unlimited territory and the lure of gold led to a stampede of adventurers, prospectors, merchants, and homesteaders ready to take their chance with a new life on the frontier. The Gold Rush was not limited to Americans crossing the Great Plains. European, Australian, and even Chinese immigrants rushed into California hungry for their part of the great strike. This Great Migration of peoples transformed the United States in the span of just a few years from a former colony into an expansive transcontinental nation on the cusp of becoming a world power

This view is based on a painting by George Henry Burgess compiled from c. 1849 sketches but painted in 1891. The painting survives at the Oakland Museum of California. It was converted to chromolithograph and published by Burgess and Crocker in 1894 - as here. There are at least two states: one with and one without the key in the lower left. Both editions appear to have been simultaneously published.

George Henry Burgess (June 8, 1831 - April 22, 1905) was a British-American landscape painter and viewmaker. Burgess was born in London to a well-known surgeon. More interested in art that the medical profession, Burgess began studies at the Somerset House School of Design. Inspired by the 1849 California Gold Rush, Burgess and his brothers Edward Burgess (1820 - 1870) and William Hubert Burgess (1824 - 1893) moved to San Francisco, arriving around July 1849. They served as miners, jewelers, hunters, and more, but all the while captured scenes of the city and surrounding country at the height of the Gold Rush hustle and bustle. During this time, they also traveled three times to Hawaii. Their longest stay was 1855 - 1856, with shorter visits in 1866 and 1871 (when Edward died). On these visits they traveled around the archipelago making drawings and sketches. In 1858 he traveled by canoe up the Fraser river in British Columbia, Canada when gold was discovered making sketches and paintings along the way. Burgess eventually made San Francisco his permanent home where he established himself as portraitist - one of San Francisco's first. In 1871, he cofounded the San Francisco Art Association where he taught art and produced lithographic views. Many of his views and drawings were turned into chromolithographic views during this period. He died in Oakland, California, 1905. Learn More...


Henry Smith Crocker (1832 - July 18, 1904) was an American printer, publisher, and railroad investor active in northern California in the middle to late 19th century. Crocker followed the Gold Rush to California, settling in Sacramento in the 1850s. He established his printing concern, H. S. Crocker, in 1856. Apparently his first office was little more than a tent with a small sign. Crocker relocated to San Francisco in 1871. He became extremely wealthy almost overnight by leveraging his ties to the Central Pacific Railroad (his brother Charles Crocker was one of the founders). In 1885, Crocker constructed a large five-story printing factory, powered by his own private steam plant, then the largest and most sophisticated printing concern on the west coast. Crocker's prosperity continued and by the time he died in 1904, he was the head of a large and extremely wealthy family. Although Crocker passed on, his company, H.S. Crocker, continued to operate and remains active to this day. Learn More...