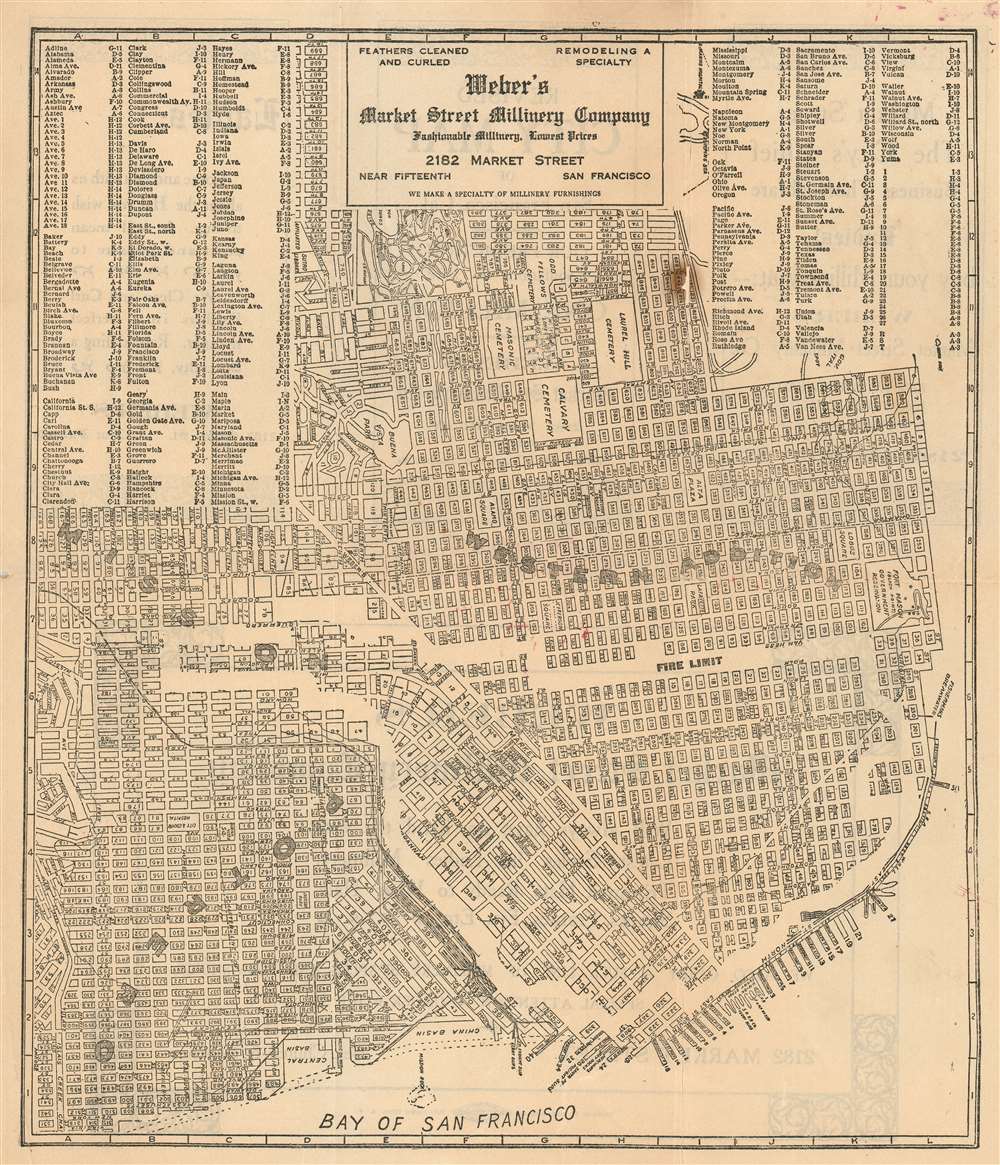 This rare c. 1907 map of San Francisco, advertising a San Francisco Millinery company, excerpts the similarly rare Washington Dodge 1902 Index Map of the City and County of San Francisco. It reproduces identically the portion of the Dodge map comprised of Potrero, the Business District, The Western Addition, and the Mission. Dodge's map, a government publication produced as part of his work as city assessor, was probably the best detailed map of the city produced prior to the 1906 fire. This present map, probably produced in 1907, repurposes the northeast corner of the Dodge map: it has been re-oriented to the west, a new set of coordinate bars and an index of street names has been added and - most significantly - the outer limit of the area destroyed by the fire of 1906 has been masked off and labeled. By thus highlighting the destruction of the late fire, the map is able to reassue its audience that 'Weber's Market Street Millinery Company' can still be found, outside the burned area by a few short blocks. The verso the map touts Weber's wares ('Weber's Market Street Millinery Company Will always have on hand the very Latest Styles in Ladies Millinery, Trimmed Hats, Ready to Wear Hats, Shapes, Frames, Etc., Etc.') but the outside fold trumpets an optimistic outlook for a city staggered by earthquake and fire: 'Revised City Map o San Francisco, Cal. -- Our Prediction Population, in 1912 ONE MILLION.'

This map appears neither in OCLC nor in catalogue or auction records. Its precursor map of 1902 appears only in OCLC listings at Stanford and U.C. Berkeley.

Dr. Henry Washington Dodge  (June 3, 1859 - June 30, 1919.) was an American Doctor, Banker, San Francisco City Assessor, and Titanic survivor. Born in Sonora, he attended the University of California, entering in 1881 and earned a medical degree in 1884. He would go on to join he Medical Department’s faculty with the title of Professor of Therapeutics. He left academia to become city assessor for San Francisco, a position he held 14 years. During his tenure there he oversaw the 1902 production of the Index Map of the City and County of San Francisco, the one cartographic work with which we are aware of his involvement. Dodge remained with the assessor's office, surviving the 1906 earthquake and fire. In 1912 he with his wife and son visited France in order to receive treatment for a blood disease. After treatment, the Dodge family returned... on board RMS Titanic. After helping his wife and son into lifeboat 5, Washington was fortunate enough to escape in lifebloat 13. Upon his return, Dr. Dodge quit the Assessor’s office and went to work as a banking executive, and later with the Federal Telegraph Company. Despite these apparent successes, Washington suffered a nervous breakdown and shot himself in the elevator of his apartment building. Learn More...

Good condition; mended splits at folds with minor loss and a stain, else very good.