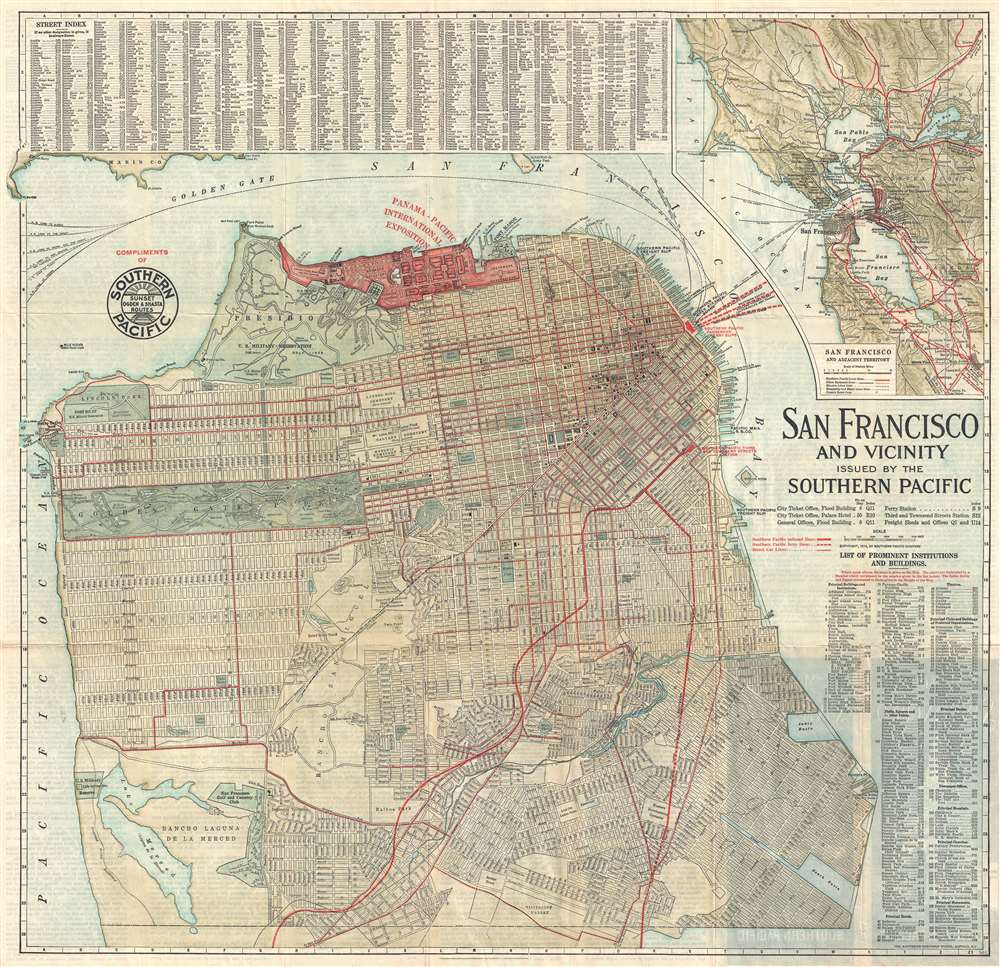 The Southern Pacific Railroad's to the Panama-Pacific Exposition!
$850.00

An attractive first edition 1914 city map or plan of San Francisco, California, issued in by the Southern Pacific Railroad. The map covers the northern part of San Francisco Peninsula from Bellevue Street and Lake Merced to San Francisco Bay. The routes of the Southern Pacific Railroad are highlighted in red, emphasizing their utility in accessing the Panama-Pacific International Exposition. This, however, may not have been the case, as there is another depot near the exposition grounds for ferries, operated by a competitor, that offers direct access to the fair. It is also important to note that the Exposition did not begin until February 1915, and this map was printed in 1914. Thus, it was created while the Panama-Pacific International Exposition was still in the planning phases. Geographically, the map offers impressive detail, all streets and numerous parks and public buildings are identified, even the individual links in the San Francisco Gold and Country Club are noted. Golden Gate Park and the Presidio Military Reservation are particularly well rendered. At the top of the map, the lands reserved for the Panama-Pacific International Exposition are marked and highlighted in red.

The Panama-Pacific International Exposition (PPIE) was a world's fair held in San Francisco between February 20 and December 4, 1915. Ostensibly, the fair was intended to celebrate the completion of the Panama Canal, but it was also an opportunity for San Francisco to showcase its recovery from the devastating 1906 earthquake. The fair was constructed on a 635-acre site (shaded in red) along the northern shore now known as the Marina District. Of course, at this time the Golden Gate and Oakland Bay Bridges have yet to be built. Street and building indexes surround the map proper. A more general map of the entire San Francisco Bay region appears in the upper right corner.

This map was issued by the Southern Pacific Railroad, which contracted the Matthews-Northrup Works publishing firm of Buffalo to prepare and print the map. A second edition was issued in 1915. We note a single example cataloged in OCLC which is part of the David Rumsey Map Collection at Stanford University.