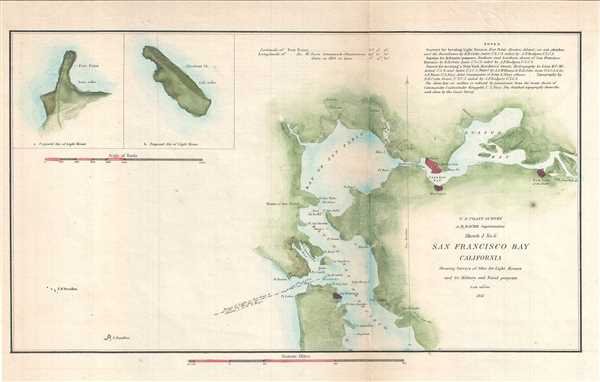 Early example of the Coast Survey's work in the San Francisco Bay area.

A detailed nautical chart or maritime map of San Francisco Bay from the 1851 U.S. Coast Survey Superintendent's Report. Includes the northern part of San Francisco Bay, San Pedro Bay, and San Francisco.The map has two insets in the top left corner of Fort Point and Alcatraz. Potential sites for lighthouses are noted. The notes on the survey appear at the top right. This chart was prepared under the supervision of A. D. Bache for the 1851 edition of the Superintendent's Report.

Very good. Backed on archival tissue. Some wear and toning on original fold lines.
Looking for a high-resolution scan of this?