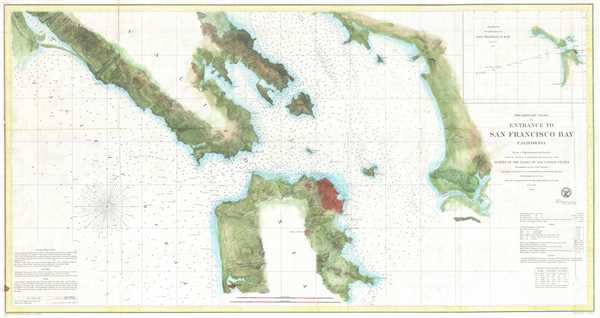 This is an 1856 U. S. Coast Survey nautical chart or maritime map of the entrance to San Francisco Bay and San Francisco itself. Centered on the City of San Francisco, the map depicts the Golden Gate Area, the Marin Peninsula, Mission de Dolores and the eastern coastline from Brooks Island to San Antonio Creek. It offers excellent inland detail noting mountain ranges, fields, swamps, and occasionally, individual buildings along with other topographical details. The early city layout and grid structure of San Francisco is clear. It notes countless depth soundings in feet and includes detailed notes on tides, light houses and a wealth of other practical information for the mariner. An inset map in the upper right quadrant features a sub-sketch of the entrance to San Francisco Bay and notes soundings along the approach to the Golden Gate.

The triangulation for this chart was prepared by R. D Cutts. The topography is the work of R. D. Cutts, A. M Harrison and A. F. Rodgers. The Hydrography was accomplished by a party under the command of James Alden. The entire chart was prepared under the supervision of A.D. Bache, one of the most influential and prolific figures in the early history of the U.S. Coast Survey. The chart was engraved by J. Knight, A. Blondeau and published in the 1856 edition of the Report of the Superintendent of the United States Coast Survey.

Bache, A. D., Report of the Superintendent of the United States Coast Survey, (Washington) 1856.

Very good. Backed on archival tissue for stability. Light wear and toning along original fold lines. Light soiling. Left side remargined. Blank on verso.
Looking for a high-resolution scan of this?