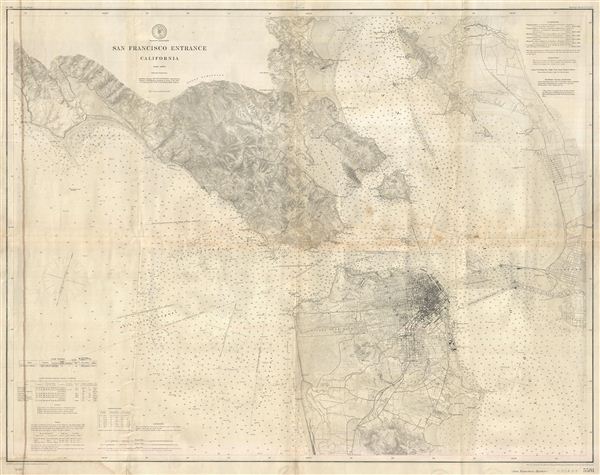 This is an extraordinary highly detailed 1897 U.S. Coast and Geodetic Survey maritime map or nautical chart of the entrance to San Francisco Bay and San Francisco itself. First issued in 1884, this updated 1897 chart covers from Duxbury Point south along the Sough Channel as far as Laguna de la Merced and westward as far as Oakland and the California-Nevada Railroad. There are countless depth soundings throughout as well as notes on shoals, rocks, magnetic variation, tide, and light houses, life saving stations, and other nautical practicalities. Inland there is a wealth of topographical detail drawn from the U.S. Geodetic survey of this region. San Francisco in particular is well laid out with the grid structure and important buildings, piers, and civil works, clearly visible. Oakland, Alameda, and West Berkeley are also present but only their grid layout is rendered. This chart was used for navigation and bears a few navigational annotations in pen. Published under the direction of W. W. Duffield, Superintendent of the Coast and Geodetic Survey.