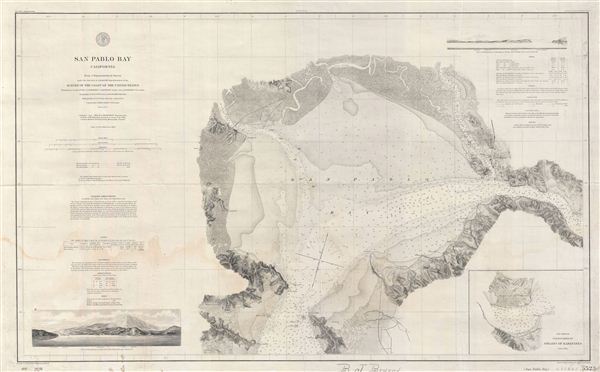 A rare heavy stock issue of the 1898 edition of the U.S. Coast Survey nautical chart or map of San Pablo Bay, California. San Pablo Bay is the extension of San Francisco Bay that lies to the north of the Golden Gate and includes the port cities of San Rafael, Richmond, San Pablo, and Vallejo. This is a fine example of the U.S. Coast Survey work at its highest expression, combing the work of the Coast and Geodetic Survey teams to offer both extraordinary nautical and inland detail. This map labels the cities of Vallejo (including a street grid and individual buildings), the San Rafael Mission, the Marin Islands, San Quentin, San Pablo, the California Powder Work, and Benicia. A sub-sketch or inset in the lower right hand quadrant details the Straits of Karquines (Carquinez Strait) as well as the cities of Benicia and Martinez. The lower left hand quadrant features detailed sailing instructions, notes on lights, soundings, and ties, and a fine view of the entrance to San Francisco Bay from Penole Point. Two shore profiles detailing the entrance to Carquinez Strait appear in the upper right quadrant.

The Triangulation for this map was completed by R. D. Cutts, G. A. Fairfield, G Davidson, and A. F. Rodgers. The Topography is the work of R. D. Cutts and A. F. Rodgers. The hydrography was accomplished by a party under the command of James Alden. The whole was originally produced in 1863 under the supervision of A. D. Bache, one of the most prolific and influential heads of the early Coast Survey. It has been updated to 1898 under the supervision of H. S. Pritchett. Represents Coast and Geodetic Survey Chart no. 5523.

Very good condition. Backed with linen. Very light water stain in lower quadrants. Some border discoloration.
Looking for a high-resolution scan of this?