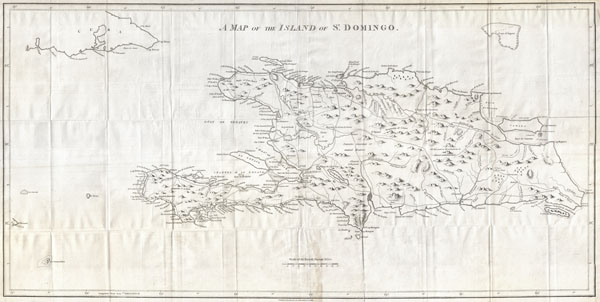 A dramatic and important map of the island of St. Domingo (Santo Domingo) or Hispaniola prepared by Bryan Edwards and published by John Stockdale in 1800. Covers the island in full offering significant detail throughout. Edwards includes notations of the navigability of various rives, comments on habitation and population, reveals the nature of the landscape, and identifies cities and roads as they existed. He also includes the line of demarcation between French and Spanish portions of the island as defined in 1776. These divisions would later evolve into Haiti and the Dominican Republic as we know them today. Edwards further identifies the Mountains of Cibao, where Columbus notoriously sought for gold.

This map, originally included in Edwards's history of the British Colonies in the West Indies, represents a significant reconsideration of the island. In the preperations of this map, Edwards sourced and supervised numerous independent surveys and studies of various parts of the island. Following its initial publication, Edwards' mapping of St. Domingo became so significant that it was copied by a number by a number of other map publishers who attempted to claim it as their own. This resulted in landmark British copyright case in which Edwards asserted his claims on the map and which, ultimately, set precedent for future cases involving cartographic copyright infringement in the United Kingdom.

Very good. Some minor marginal tears - all of which have been repaired. Original fold line present. Could benefit from professional flattening - an additional service this map is priced to accommodate.