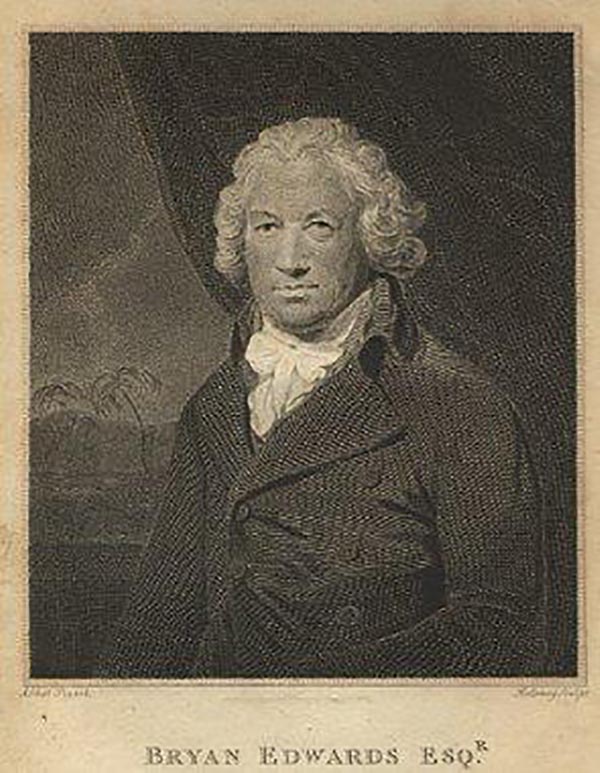 Bryan Edwards (May 21, 1743 - July 15 or 16, 1800) was a British politician and colonial administrator active in the later part of the 18th century. Born in Westbury, England, Edwards lost his father at 13 years of age. His education was subsequently taken over by his uncle, Zachary Bayly, a wealthy merchant based in Jamaica. This would turn out to have a profound influence on Edwards. When Bayly died in the 1770s, Edwards inherited his uncle's substantial wealth and quickly rose to a position of prominence in the Colonial Assembly of Jamaica. Raised in the plantation culture of Jamaica, Edwards used his wealth and influence to advocate for the continuation of the slave trade. Despite being politically misguided, Edwards was regarded with respect by both his colleagues and opponents. During his long tenure in the West Indies, Edwards wrote a number of histories and administrative studies, many of which featured important cartographic works and offered an illuminating view of the British colonies in the region. He is also known to have returned to England on several occasions where he repeatedly attempted and failed to acquire a seat in Parliament. Eventually, he was elected to represent the Cornish borough of Grampond, though the election itself may have been corrupt. Edwards was also secretary of the Association of Promoting the Discovery of the Interior Parts of Africa. In this capacity, he wrote of the first known account of the travels of Mungo Park in Africa.

1794 Edwards and Stockdale Map of Grenada

1794 Edwards and Stockdale Map of Antigua

1794 Edwards and Stockdale Map of Barbados