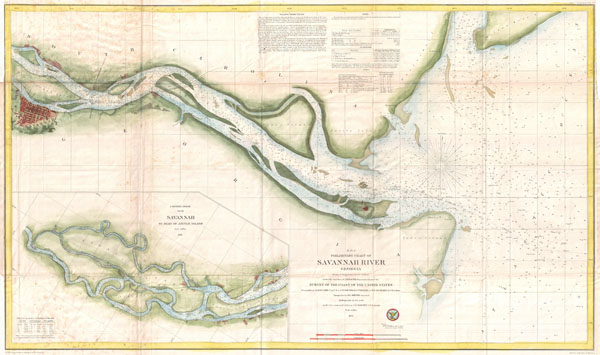 This is a very attractive example of the 1855 U.S. Coast Survey nautical chart or map of the Savannah River, Georgia. Centered on Jones Island, this map extends from the river's mouth at Tybee and Turtle Islands inland as far as the city of Savannah, which is itself drawn in considerable detail. This chart notes Fort Pulaski at the mouth of the river as well as the Fort Jackson and the Union Causeway. The city of Savannah itself is beautifully rendered with its hallmark grid structure and even important buildings and parks clearly in evidence. The lower left quadrant features an inset that continues the map from Savannah westward to Argyle Island. The triangulation for this map was completed by E.O. Cord, C. O. Boutelle, C. P. Bolles and D. T. Van Buren. The topography is the work of H. I. Whiting. The Hydrography was accomplished by a party under the command of J. N. Maffitt. The entire chart was produced under the supervision of A. D. Bache, of the most prolific and influential Superintendents of the U.S. Coast Survey.

Report of the Superintendant of the United States Coast Survey, (Washington) 1855.

Good condition. Some foxing here and there especially in the left-hand quadrants. Wear, verso reinforcement, and light toning on original fold lines. Some margins extended.
Looking for a high-resolution scan of this?