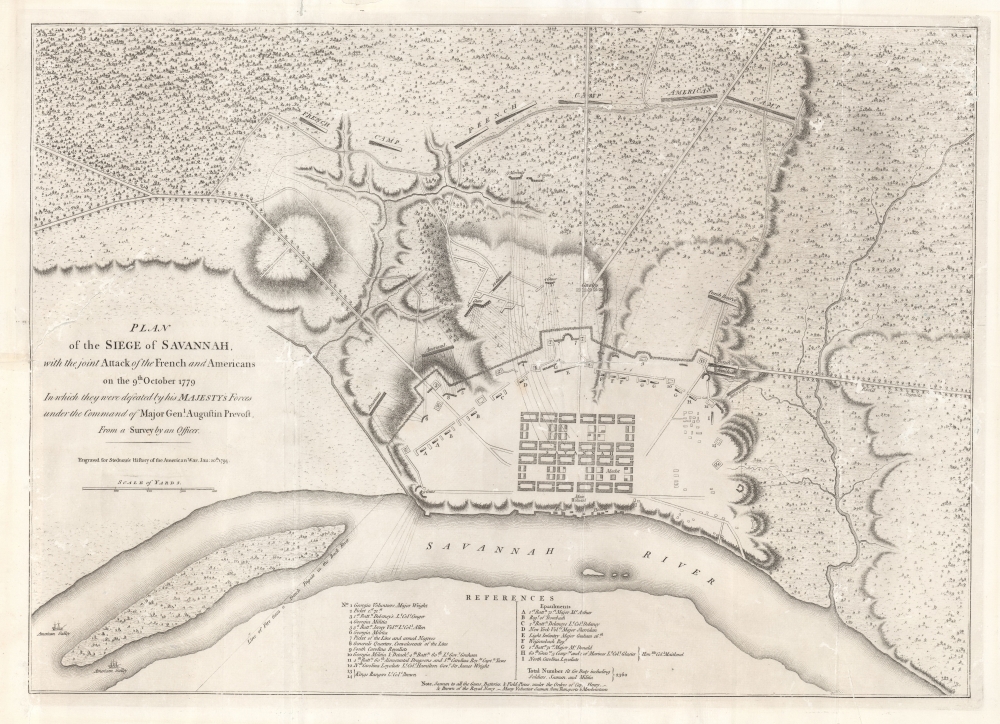 A rare example of the sole contemporaneous map of the Siege of Savannah, published here in 1794 (second edition) for Charles Stedman. The map illustrates one of the bloodiest battles of the American Revolutionary War (1775 - 1783), in which a joint force of French and American soldiers attempted (and failed) to reclaim British-occupied Savannah.

The map is oriented roughly to the south, with the city in a rough approximation of Oglethorpe's plan at center. British defensive positions are illustrated around the city, while Continental and French Batteries and positions occupy the surrounding highlands. Trees, roads, and surrounding topography is also illustrated. Even the trajectory of cannon fire is noted. On the Savannah River, the positions of blockading American galleys are illustrated. The reference key at bottom center includes 14 notes and identifies 9 epaulments.

Following the 1777 Continental victory at Saratoga and the 1778 Treaty of Alliance with France, the British began to consider that they might potentially loose the war. Rather than face the Continental Army directly, they instead focused on supporting Loyalists, who they believed were predominant among the southern plantation colonies. They began a campaign to seize major southern ports, taking Savannah in 1778 and Charleston in 1780.

A joint French-Continental effort to retake Savannah began in 1779, lasting from September 16th to October 18, 1779. The siege proper began on October 9th, as dated here, with French and American forces launching a concerted assault on the fortified British positions. The occupying British, under Major Augustin Prevost, successfully repulsed repeated major attacks, leading to some of the heaviest casualties of the war. Ultimately, with untenable losses, the Continental Army withdrew. The British remained in control of Savannah until July 1782, a year before the war ended.

The defeat was a heavy blow to both the Continental Army and their French allies. Neither subsequently published a plan of the event - likely to hide their humiliation -, the British however were eager to celebrate the defense and a meticulously detailed plan was engraved and published in London by William Faden based upon accounts from Provost's engineers. That plan was modified to this plate in 1794.

This map was first engraved and published by William Faden in 1784, shortly after the American Revolutionary War ended. The plates were sole to Charles Stedman in the subsequent decade, who reissued the map for his 1794 History of the Origin, Progress, and Termination of the American War. The map and book are well represented institutionally, but scarce to the market, with only 4 known dealer listings in the past 10 years.


Charles Stedman (December 22, 1753 - June 26, 1812) was a British-American military officer who served during the American Revolutionary War (1775 - 1783). He was born in Philadelphia, Pennsylvania and took a law degree and William and Mary College, Virginia. Despite being American born, Stedman was a staunch Loyalist. When the Revolution broke out, he supported the crown and was awarded with a commissary post under British commander Sir William Howe. Stedman was fluent in German, perhaps learnt through connections with Pennsylvania German settlers, and became invaluable as an intermediary between Howe and Hessian auxiliaries. Twice he was captured and sentenced to death, and twice he escaped before the execution could be carried out. After the peace of 1783, he retired to England with the half-pay of a Colonel. He dedicated himself subsequently to compiling a history of the Revolutionary War, which was published in 1794. Later, from 1797, he worked at the office of deputy controller and accountant-general of the revenue of stamps. After his death in 1812, he was buried at Paddington. Learn More...

Stedman, C., History of the Origin, Progress, and Termination of the American War, (London) 1794.