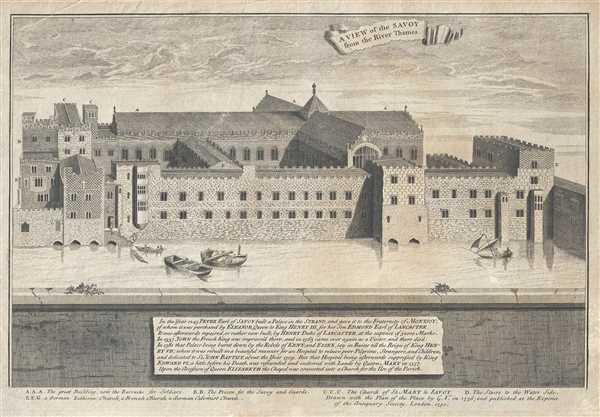 This is a 1750 George Vertue print of the buildings of the Savoy in London, England. Originally etched and engraved in 1736, this print was commissioned and published by the Society of Antiquaries of London for their multivolume history entitled Vetusta Monumenta (Ancient Monuments).

The Savoy, better known as the Savoy Palace, was considered the grandest nobleman's townhouse in medieval London and stood between the Strand and that Thames River. The Strand, the most desirable location for housing nobility during the Middle Ages, was situated along the ceremonial route between the city and the Palace of Westminster, where the business of parliament and the royal court took place. In 1246 King Henry III granted the land between the Strand and the Thames to Peter, the Count of Savoy, who built a house there. The house became the home of Edmund, the Earl of Lancaster, and his descendants, the Dukes of Lancaster. In the 14th century, it became the home of John of Gaunt, a younger son of King Edward III who had inherited by marriage the title and lands of the Dukes of Lancaster. The house was destroyed during the Peasants' Revolt in 1381, because the rioters blamed John of Gaunt for the introduction of the poll tax that had instigated the revolt. The house and everything in it was systematically destroyed; everything was either smashed, burned, or thrown in the river. Despite this, the name Savoy was retained by the site. It was on this site that, in 1512, Henry VII founded the Savoy Hospital, which is what is depicted in the current engraving by George Vertue's. It became the most impressive hospital in the country and the first to benefit from permanent medical staff. In 1642, it was reassigned as a military hospital before being converted into barracks in 1679. The Savoy Hospital was destroyed by a fire during the 18th century. A hundred years later, during the 19th century, all of the remaining hospital buildings were demolished, with the exception of the chapel, which remains standing today. The caption at the bottom of the print gives a brief history of the Savoy, when it was built and by whom, how the house changed hands, and how it was ruined during the riots. The caption also includes when it was rebuilt and how it's function changed until the engraving was commissioned. Within the image, each part of the Savoy is labeled with letters corresponding to descriptive text at the bottom of the print. There is also a small inscription which reads,

Drawn with the Plan of the Place by G.V. (George Vertue) in 1736; and published at the Expence of the Antiquary Society, London, 1750.

George Vertue (1684-1756) was an English engraver born in London. As a young man he apprenticed as an engraver for several years before beginning to work independently. He had an avid interest in antiquarian research and accumulated about forty volumes of notebooks about the details of the history of British art, which serve as an important research for contemporary knowledge on the subject. In 1717 he was appointed as the official engraver of the Society of Antiquaries, of which he was a founding member. Most of the illustrations in the Vetusta Monumenta, until his death, are his work. Vertue was also a portraitist, with approximately 500 portraits attributed to him. A similar number of plates devoted to antiquarian subjects were also published in his name. Learn More...

The Antiquary Society, Vetusta Monumenta     Vetusta Monumenta (Ancient Monuments) was originally published in seven volumes between 1747 and 1906. It was the first of three major publication series launched by the Society of Antiquaries of London. In 1718, the year the society was formally established, the first four plates were published. Fellows of the society received a copy of each engraving as a benefit of membership and additional copies went to book- and printsellers. By 1747, 70 engravings had been published, enough to form a volume. The second volume appeared in 1789. During the first fifty years of publication, the most important figure involved was engraver George Vertue.