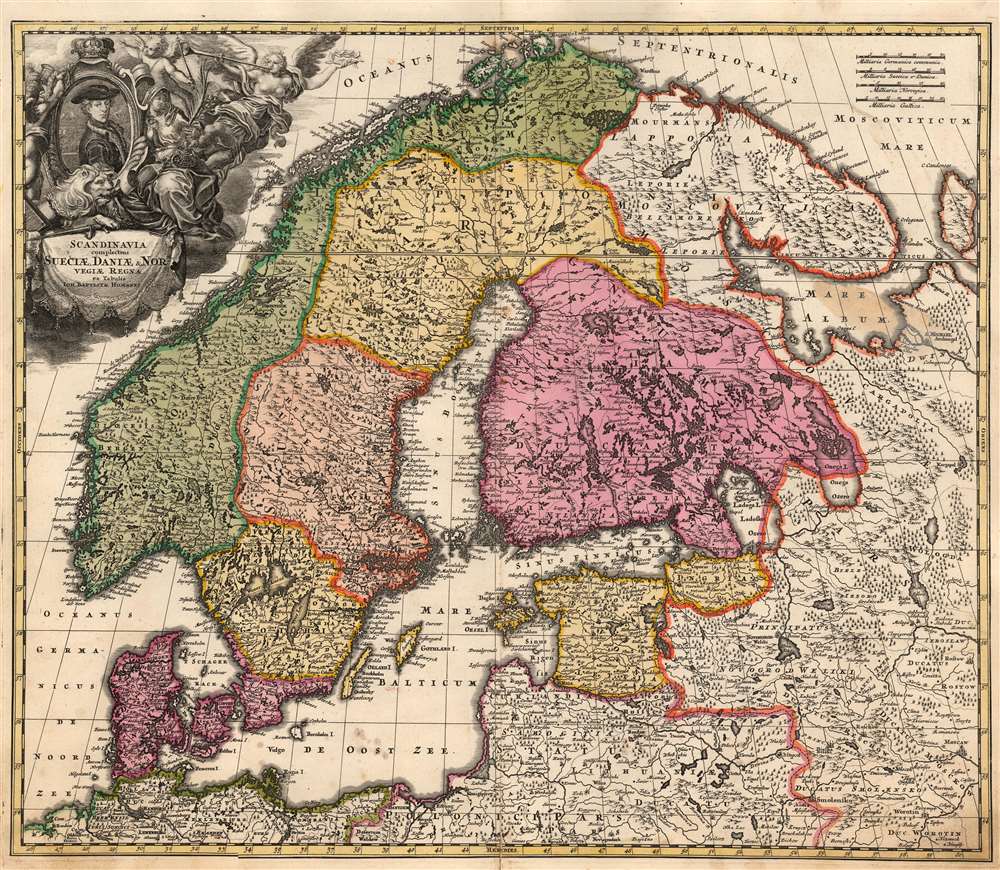 This is Johann Baptist Homann's 1716 map of Scandinavia, bringing the dominant 17th century mapping of the northern parts of Europe up-to-date with the events of the Great Northern War (1700 - 1721). The map is based primarily on Anders Bure's 1626 mapping of the region, which became the state of the art of the mapping of Scandinavia and was replaced as an authority for more than a century. In this regard, Bure is hailed as the Father of Swedish Cartography. The scope of the map includes Denmark, Norway, the greater Swedish Empire, the Baltic coasts of Germany, Poland and Livonia, and the Russian Empire - including 'Lapponia Moscovitica,' the portions of Lapland occupied by Russia.

This map was produced during the 1700 - 1721 Great Northern War between Sweden and Russia. It captures a period in which Sweden was losing ground in the conflict - particularly in the region of the Gulf of Finland, and the city of St. Petersburg. The dotted, engraved border between Russian and Swedish territory is preserved here from (most likely) De Wit's 1680 Novissima nec non Perfectissima Scandinaviae, which showed the extent of Sweden's acquisitions as of 1654. But the original wash and outline color here highlights areas which were, at best, contested - and many of which were, by the time this map was published, securely Russian. Livonia, Ingria, and parts of Karelia are here no longer Swedish, and although surrounded and colored in the red associated with Swedish Finland on the map, the newly-founded city of Petersburg is clearly marked. Despite early victories in the Northern War, by the time this map was published there was little to be celebrated by the Swedes. In 1709, Charles suffered his greatest defeat at the hands of Peter the Great: the Battle of Poltava. This was a defeat from which Charles would never recover, a reality not lost on the mapmaker.

The title cartouche in the upper left is beautifully engraved, but presents the celebrated King of Sweden in the midst of his fall. The young king appears centrally in a portrait, with battle scenes and fortifications faintly in the background. A lion, one of the heraldic symbols for Sweden, lies at the foot of the portrait. In its mouth is a laurel - the symbol of victory - wilting. To the left, a helmeted figure - Ares, the god of War - can be seen removing more laurels from the portrait frame. A putto reaches up towards the crown surmounting the frame, indicating imminent loss. The goddess of victory - Nike - flies away, holding her victory laurel away from the King. Seated beside the portrait, with veiled hair, an incense burner, and a palm branch is a mournful-looking figure (possibly Chastity). Charles XII never married and fathered no known children: in an 18th century monarch, this represented more of a problem than a virtue. When Charles was shot and killed during the Siege of Fredriksten on December 11, 1718, his sister Ulrika assumed the throne, but was unable to maintain the absolute rule her father established, and her brother maintained. The war with Russia ended soon after.

The cataloging of this map is wildly inconsistent in terms of its dating. Many libraries list it with a date of 1702, despite the clear presence of the St. Petersburg. This is not credible: in 1703 Peter and Paul Fortress was only just laid down. Tsar Peter moved the capital from Moscow to Saint Petersburg in 1712, and the very first plan of the city was not published until 1717.

Moreover, the waters are muddied by the existence of no fewer than seven maps, printed from six different plates, all with the same title, all attributed to Homann (although several of these appear to be pirated maps, copying the Homann down to its Imperial Privilege). The earliest credible date we associate with one of these is 1711. An example of that map in the same, first state appears in a 1716 Homann atlas. A second state of that same plate, with a re-worked cartouche, appears in a different atlas bearing the same date (both atlases appear in the collection of David Rumsey). The present map is an example of what we believe to be the second state of the first plate. Of the six further plates based on this map, the earliest credible date is 1721. The map would appear to be well represented in institutional collections, but given the pig's breakfast presented by the inconsistent cataloging, it is impossible, short of the examination of each cataloged example in person, to determine the prevalence of one plate over another.

Very good. Scuffing at bottom centerfold. Stain in the area of the White Sea. Reinforced with old paper at time of binding. Rich original wash color and a bold, sharp strike.