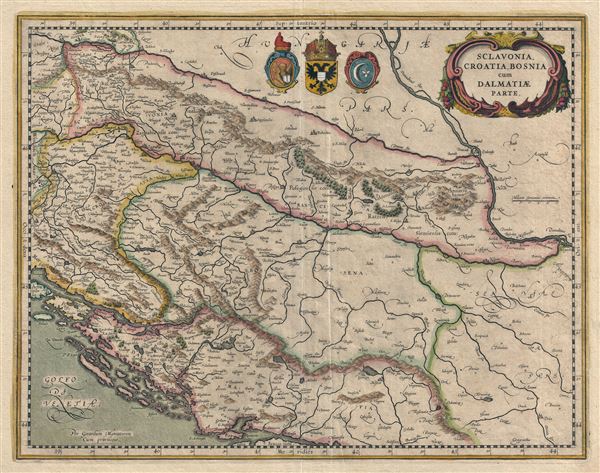 This is a scarce map of Croatia, Slovenia, Serbia and Bosnia and Herzegovina by Gerard Mercator dating to c.1628. It covers the western part of the Balkans from Varazdin, Croatia south to Brac and from the Adriatic Sea and Arbe east as far as Belgrade and includes parts of the modern day countries of Croatia, Slovenia, Serbia and Bosnia and Herzegovina. Renders the region in extraordinary detail, noting rivers, towns, islands and a host of other topographical features with forests and mountains beautifully rendered in profile. The map includes three coats of arms near the top border and a beautifully illustrated title cartouche adorns the top right quadrant.

Very good. Minor wear along original centerfold. Original platemark visible. Blank on verso.
Looking for a high-resolution scan of this?