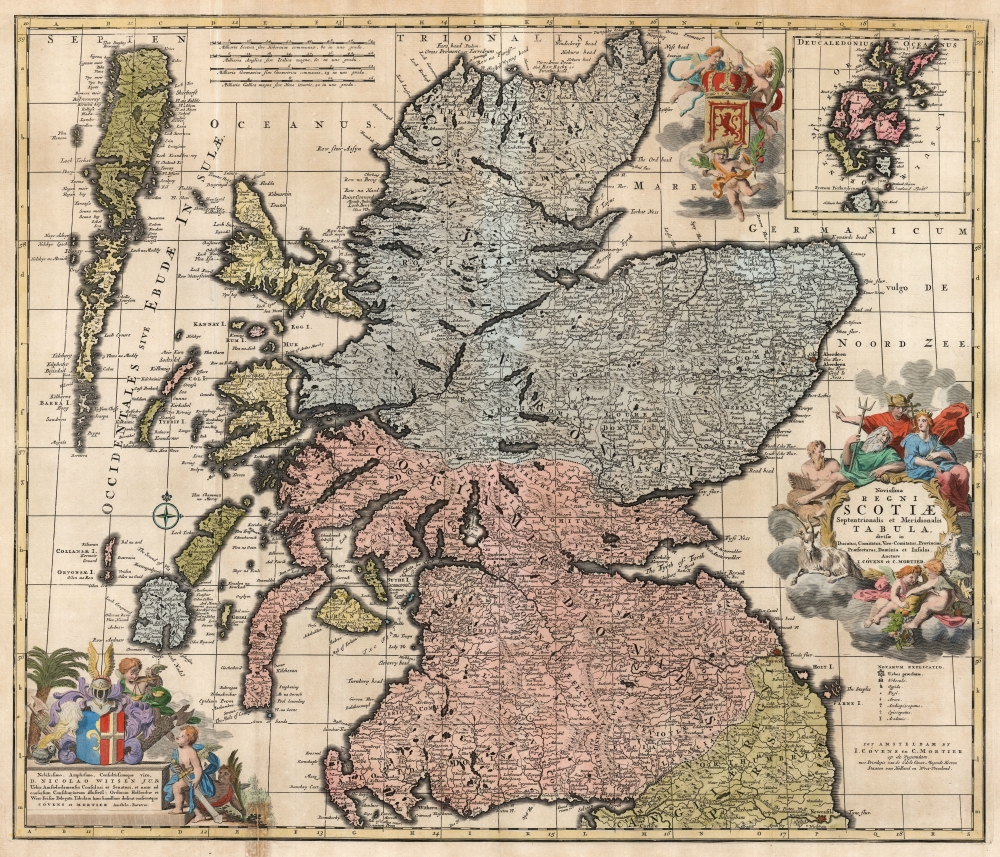 Scotland, the Hebrides, and the Orkney Islands Beautifully Embellished.

This is Carel Allard's 1697 map of the Kingdom of Scotland, in its 1725 Covens and Mortier edition. Between the superb engraving of the map and its ornate cartouches, it is one of the most richly decorative maps of Scotland produced in that era.

Allard's fine engraving and generous plate size allows for granular detail and a multitude of place names. The relative size of towns is indicated with symbols listed in a key; there are also symbols for colleges, bishoprics, archbishoprics, and forts. The region's rough terrain is shown pictorially, as are Scotland's Lochs and Firths. Hadrian's wall, spanning from Newcastle to Carlisle, is marked at the southern extreme of the map, here named 'The Pictes Wall.' The main map extends far enough west to embrace the Hebrides; an inset map in the upper right allows the inclusion of the Orkney Islands as well.

An Apt Dedication, and Other Rich Decoration

In the lower left is an elaborate dedicatory cartouche hailing Nicolaes Witsen, a wise choice. Not only was Witsen the Mayor of Amsterdam, but he was also an administrator of Dutch East India, a sometime ambassador to the English court, and Fellow of the Royal Society. The cartouche displays the Witsen arms, flanked with fasces as a symbol of his power as magistrate. It is attended by putti, one studying scales of judgment and the other with a sword of state. A third, lurking in the background, appears to have laurels in hand. To the left of the Orkneys inset, a trio of putti present the Royal Arms of Scotland; one, standing in for Victory, blows a trumpet and bears a palm branch. A helmeted putto displays an armful of thistles.

The title cartouche at the lower right features an array of classical allusions. The god Pan, replete with pipes, is here in his aspect of 'guardian of the flocks,' a reference to Scotland's wealth of sheep. (A goat and a sheep are also shown here.) Old Poseidon (with the trident) leans in with casual propriety, claiming authority of this most sea-bound part of the British Isles. Europa sits in attendance, giving ear to Hermes - who appears to be advising on the commercial benefits offered by the region. Meanwhile in the foreground, two more putti appear to be in danger of spilling their cornucopia into the North Sea.

This map was engraved by Carel Allard around 1697 for inclusion in his atlases. The plate was eventually acquired by Amsterdam publishers Covens and Mortier, who replaced Allard's imprints throughout with their own but made no further changes to the work; they kept it in print as late as the 1740s. The map is well represented in institutional collections and appears on the market from time to time.

Carel Allard (1648 - 1709) was a Dutch art dealer, cartographer and engraver. In the 17th century, the Allard family published various maps in Amsterdam. Carel was the son of mapmaker and engraver Hugo Allard. He appears to have been somewhat prolific and successful than his father: he produced in his lifetime a 1697 Atlas Minor, the c. 1705 Atlas Major and several other works with engraved plates, as well as continuing to publish from his father's stock. He passed along his copperplates to his son Abraham (1676-1725) prior to going bankrupt in 1706. Learn More...