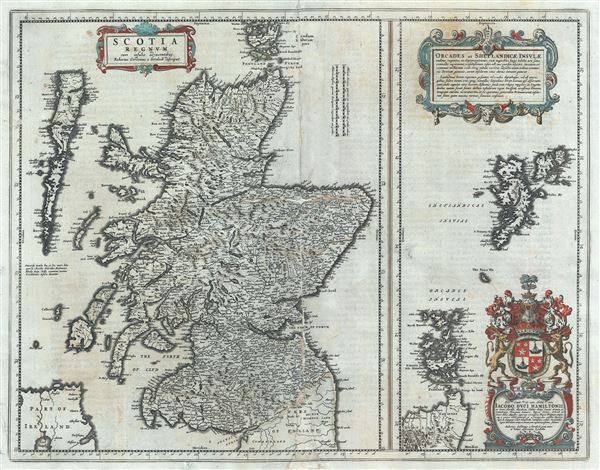 This is a beautiful map of the Kingdom of Scotland by Joan Blaeu in 1662. Essentially divided into two panels within a single border, the panel on the left depicts Scotland from its southern border to Orkney Islands, including the Outer Hebrides and the right panel depicts the Orkney Islands and the Shetland Islands. Numerous towns, cities, rivers and other topography is noted throughout, with relief shown in profile.

Two beautifully engraved title cartouches are included in each panel. The coat of arms of Jacob Hamilton, to whom this map is dedicated, in included in the bottom right quadrant. This map was issued in the 1662 Latin edition of Blaeu's magnificent Geographiae Blavianae or Atlas Major.

Good. Some wear and repair with minor portions missing along original centerfold. Professionally flattened and backed with archival tissue.