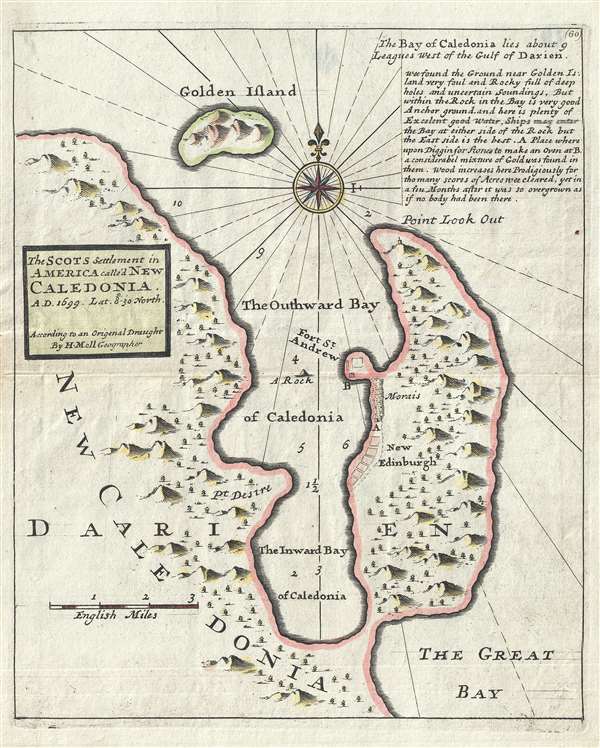 Map of a short-lived Scottish colony in Panama whose failure led to the creation of the United Kingdom.

A fascinating map with huge political ramifications, this is Herman Moll's 1729 map of the short-lived Scottish colony in Panama, New Caledonia. New Caledonia was situated on the south eastern coast of modern day Panama in the Gulf of Darien, near what is today Puerto Escoces. The colony, known as the Darien Scheme, was a colossal failure, bankrupting Scotland, and forcing the Scottish government to sign the Act of Union in 1707, thus creating the modern day United Kingdom.

The Darien Scheme: A Daring Bid for Global Trade

The Darien Scheme was the brain child of Scottish businessman, politician, and founder of the Bank of England, William Patterson. The late 17th century was a difficult period for Scotland, whose interests lagged behind those of its more powerful neighbor, England. In a bid to break the British East India Company's near monopoly on global trade, Patterson conceived a scheme to create a Scottish settlement on the Darian Isthmus (Panama) and thus control an overland passage to the Pacific. Patterson attempted to raise money for the Company of Scotland, as it was called, both at home and abroad, but under pressure from the British East India Company and the English government, most foreign investment pulled out. Instead, the venture was funded almost entirely out of Scotland and, at its height, controlled almost 20% of all circulating currency in Scotland.

The Darien scheme, finally well financed, sent out its first expedition in 1698. Consisting of some 1200 settlers, mostly former officers and soldiers, the five ships set sail from Leith in July of 1698, making landfall on the coast of Darian on November 2, 1698. They set up their village, called New Edinburgh, on the inland side of what appeared to be a natural harbor, but which was in fact a bay plagued by violent tides. Within the first six months attempts at agriculture failed and under pressure from both the Spanish and the English, most trade vessels bypassed the colony. By the time that malaria set in, the colony was already in dire straits and the decision was made to abandon it on board the Caledonia When the Caledonia limped into New York harbor only about 250 of the original 1200 settlers remained alive. Two more attempts were made to revive the colony, both of which similar ended in disaster.

1707 Acts of Union and the birth of the United Kingdom

Back in Scotland, the failure of the Company of Scotland's attempt to settle the Darien Peninsula pushed the already beleaguered and heavily invested Scottish economy into bankruptcy. The Scottish nobility realized that the only hope of reviving the economy lie in linking Scotland's fate to that of a more powerful nation, and so signed the 1707 Acts of Union, formally creating the United Kingdom. As part of negotiations, they asked that the Scottish national debt be wiped out and that the currency be stabilized. Although English refused to eliminate Scottish debt, the Scottish Shilling was pegged to the English Penny and remains so to this day.

Cartographically this map is derived from manuscript maps drawn by William Hacke, an English Thames School cartographer. Some of these maps survive today national archives. It was engraved by Herman Moll and published posthumously by John and Thomas Bowen in 1736.


The Bowles family (fl. c. 1714 - 1832) were publishers and map sellers active in London from c. 1714 to c. 1832. The firm, under Thomas Bowles ( fl. 1714 - 1763), John Bowles (1701-1779), Carrington Bowles (1724 - 1793), and as Bowles and Carver (fl. 1794 - 1832), produced a massive corpus of work that included numerous atlases, pocket maps , and wall maps. The Bowles publishing tradition was kept alive over four generations starting with Thomas Bowles who was a print engraver in the late 17th century. The first maps issued by the firm were actually produced by his son, Thomas Bowles the second, who based in self in St. Paul's Churchyard, London. Thomas's brother, John Bowles (called "Old John Bowles" or "Black Horse Bowles" by those who knew his shop), was also an active publisher and was established at no. 13 Cornhill. It is said that he was one of the first publishers of William Hogarth's works. It was here that John's son, Carrington Bowles, was introduced to the trade. Carrington took over the Cornhill bookshop and eventually merged it with his uncles shop in St. Paul's Churchyard. On Carrington's death in 1793, the business was passed to his son Henry Carrington Bowles, who partnered with Samuel Carver, renaming the firm, Bowles and Carver. Under this imprint the firm continued to publish maps and atlases until the early 1830s. Learn More...