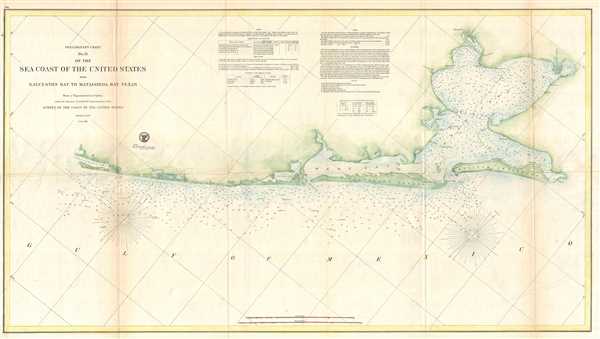 This is a large hand colored 1857 U.S. Coast Survey nautical chart or map of the Texas Gulf Coast. The map depicts from Matagorda Bay to Galveston Bay. Both East Bay and West Bay are labeled, as well as Bolivar Peninsula and Galveston Island. Galveston, which is also labeled, served as the capital of the Republic of Texas in 1836 when interim president David G. Burnet moved his government there. Myriad depth soundings are included all along the coast. Navigational aids are included along the top border.

Very good. Even overall toning. Some wear along original fold lines. Backed on archival tissue for stability. Blank on verso.