1854 Pharoah Map or Plan of the City of Secunderabad, Telangana, India 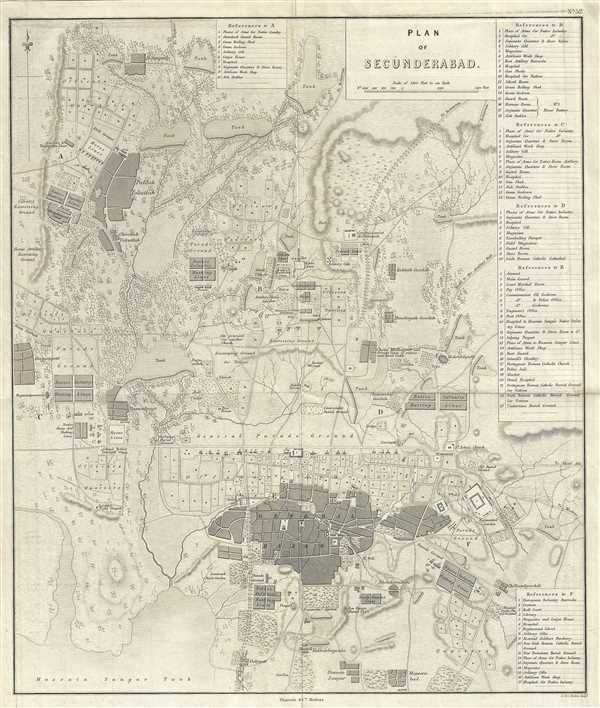 1854 Pharoah Map or Plan of the City of Secunderabad, Telangana, India

Pharoah map of Secunderabad, the twin city of Hyderabad.

This is a beautiful 1854 map or plan of Secunderabad located in the Indian state of Telangana. It covers the British cantonment in beautiful detail, noting streets, bazaar, military grounds, tanks, fields, streams, and topography. Extends from the Hussain Sagar Lake north to Bowenpally. The map includes six specific areas and a reference key along the right border lists the locations noted in each area. These include hospitals, burial grounds, military offices, cathedrals, cells, etc.

Separated from Hyderabad by the man made Hussain Sagar Lake, Secundarabad is often referred to as the twin city of Hyderabad. Founded as a British cantonment in 1806, the city developed directly under British rule until India’s independence. Today Secunderabad is part of the city of Hyderabad and continues to be one of the largest cantonments in India, with a large presence of army and air force personnel.

This map was engraved by J. and C. Walker and issued as plate no. 52 by Pharoah and Company in their 1854 Atlas of Southern India.