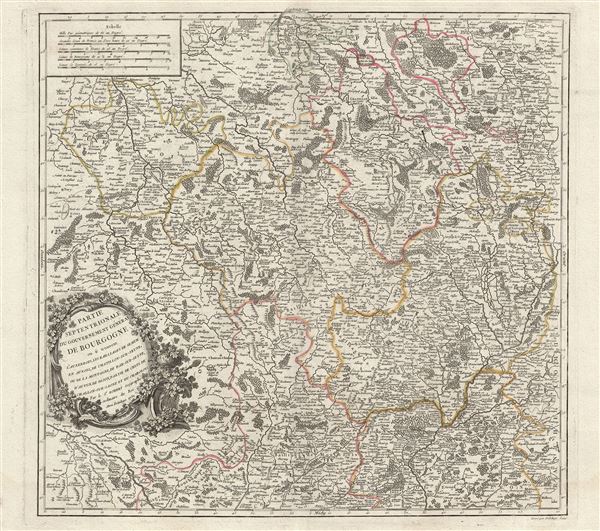 Home of the finest Pinot noir and Chardonnay wines.

This is an attractive 1752 map the northern Burgundy (Bourgogne) region of France by Robert de Vaugondy. It covers the region from Chaumont south to Louhans and from Dornes east as far as Dole and includes the whole or parts of the modern day departments of Cote-d'Or, Yonne, Saone-et-Loire and Nievre. The map rendered the entire region in extraordinary detail showing roads, canals, rivers, cities, villages, chateaux, etc.

The region of Burgundy is famed for producing the world's finest wines. It produces what are arguably the world's finest, and most expensive Pinot noir and Chardonnay wines. The area in the western part of this map, part of the department of Yonne, is also one of only two departments that produce Chaource cheese. Chaource is a cow's milk cheese, cylindrical in shape. The central pate is soft, creamy in color, and slightly crumbly, and is surrounded by a white penicillium candidum rind. The Saone-et-Loire region produces Mercurey and Givry among other red wines. Nievre is known for its production of Pouilly Fume, a white wine. The word 'fume' is French for 'smoke,' and it is said the name comes from the smoky quality of these wines.

A beautifully engraved title cartouche adorns the bottom left quadrant of the map. Drawn by Robert de Vaugondy in 1752 and published in the 1757 issue of his Atlas Universal. The Atlas Universal was one of the first atlases based upon actual surveys. Therefore, this map is highly accurate (for the period) and has most contemporary town names correct, though historic names are, in many cases, incorrect or omitted.