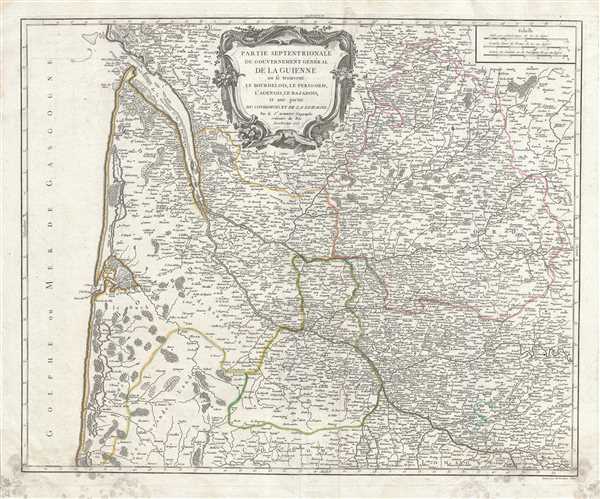 This is an attractive 1752 map by Robert de Vaugondy of the province of Guyenne, now forming part of the Aquitane region in southwestern France. It depicts the counties of Perigord, Bordelais (Bordeaux), Bazadais and Agenais roughly corresponding to the modern day departments of Lot-et-Garonne, Dordogne, Gironde and Landes. The city of Bordeaux is identified. The map extends from Contis-Plage east to Cahors and north as far as Arvert. It rendered the entire region in extraordinary detail showing roads, canals, rivers, cities, villages, chateaux, etc.

The Bordeaux region is the seat of the Bordeaux wine region and produces many of the world's finest reds. The ancient county of Perigord (An important battlefield of the Hundred Years' War between the English and the French), roughly corresponds to the modern department of Dordogne. This area is best known for its production of Monbazillac, a sweet white wine, and Cabecou, a soft goat cheese. The coastal department of Gironde is known for its remarkable cuisine and is the home to both Fois Gras and Armagnac. Lot-et-Garonne is famous for its production of Buzet wines and Cabecou d'Antan, small round goat cheese with a fine, creamy texture. The Pilgrimage to Santiago de Compostella also passes through the northern part of this region. Landes produces Chalossais, a white cow cheese with a gentle, acidic edge. Tursan wine is also distilled here, along with Armagnac brandy.

A beautifully engraved title cartouche adorns the top center of the map. Drawn by Robert de Vaugondy in 1752 and published in the 1757 issue of his Atlas Universal. The Atlas Universal was one of the first atlases based upon actual surveys. Therefore, this map is highly accurate (for the period) and has most contemporary town names correct, though historic names are, in many cases, incorrect or omitted.

Very good. Some wear and toning along original centerfold. Minor creasing right of centerfold. Original platemark visible. Some spotting and offsetting with damp stain in margins.

Rumsey 3353.042. Pedley, Mary Sponberg Belle et Utile: The Work of the Robert de Vaugondy Family of Mapmakers, 149.
Looking for a high-resolution scan of this?