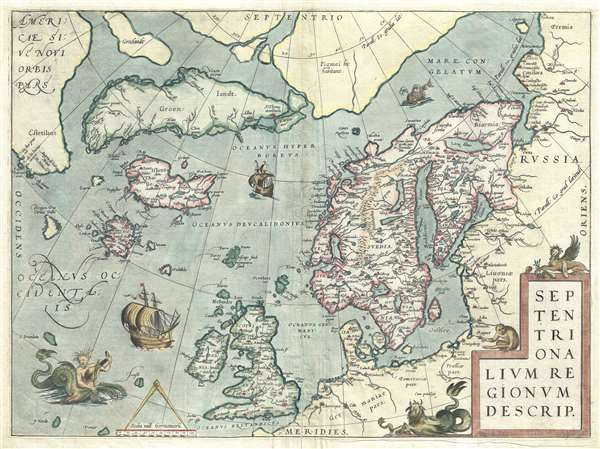 One of the earliest maps to show Mercator's speculative Arctic islands, the apocryphal Friesland, and Zeno's fraudlent version of Labrador, Estotiland.

One of Abraham Ortelius' most interesting maps, this is his 1572 map of the Arctic, here in its rare second state. The map covers the northern regions from the English Channel to the just south of the North Pole and from America to Russia, including England, Scandinavia, Finland, Denmark, Iceland, and Greenland, as well as parts of America (Estotiland), the apocryphal island of Friesland, and Mercator's speculative Arctic islands.

This is one of the few maps to depict Estotiland and Droegeo, both drawn from the narrative of the Zeno brothers, supposedly written in the 14th century, before Columbus, but actually published by the Venetian merchant and statesman Nicolo Zeno in 1561. Most subsequent cartographers associated Estotiland with Labrador based upon Zeno's description,

While Zeno's cartography was influential in the 16th and 17th centuries, modern scholarships suggests that Nicolo's work was mostly a fictional Venetian attempt to co-opt the achievements of the Genoese navigator, Christopher Columbus.

Drawing from both the Olaus Magnus and Zeno, Ortelius here includes both Iceland and Friesland. Frisland probably first appeared on the 1561 Zeno map, but was copied by numerous subsequent cartographers including, as here, Ortelius. There is debate about the origins of Friesland, with some speculating that it a mismapping of the southern part of Greenland and other suggesting it is a double mapping of Iceland. Frisland continued to appear in many forms on maps until the 18th century, when it merged with speculations that Greenland was actually two islands separated by an undiscovered channel.

This is one of the earliest maps to illustrate Gerard Mercator's speculative Arctic Islands. When Mercator published his great wall map introducing the famous Mercator Projection in 1659, he recognized the essential problem with his map was that it massively distorted the polar regions. To rectify this, he included a polar projection as in inset on the map. It was this small projection, later refined in his 1595 Arctic map, that introduced Mercator's idea of four arctic islands surrounding an open Arctic sea, at the center of which was a great whirlpool. Two of those islands are visible here, one unnamed, and the other just north of Norway, labeled Pigmei hic habitant, for Mercator's assertion that it was the home of a race of female pygmies. The channel between the islands, possibly Mercator's interpretation of Davis Strait, was described as having violent currents. Variants on Mercator's arctic islands continued to appear in various forms well into the 17th century, until the discoveries of Spitzbergen and other Arctic islands began to disprove the speculation. The islands disappeared entirely in Hondius's 1636 Arctic map Poli Arctici et Circumiacentium Terrarum Descriptio Novissima.

This map was drawn by Abraham Ortelius and engraved by Franz Hogenberg. It wa issued in 1572 with the first French edition of the Theatrum Orbis Terrarum. The present example is Burden's first state, with no place names on the polar island north of Scandinavia, and Van den Broecke's second state, identifiable because of the triangle added at the end of the title, as well as for the lack of significant hachuring in the English Channel, which was added in Van den Broecke's 3rd state.