1794 Laurie and Whittle Nautical Map of the Mahe and Amirantes Islands, Seychelles 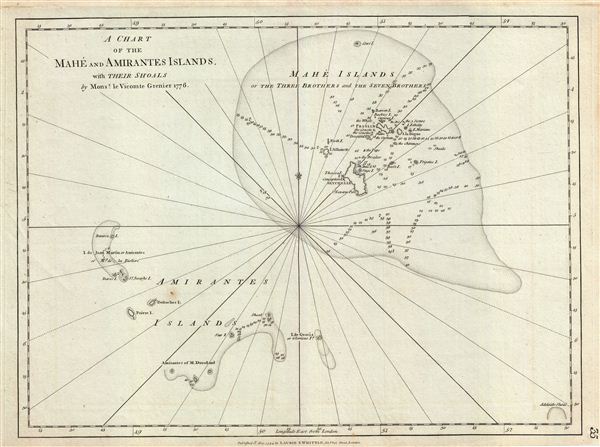 1794 Laurie and Whittle Nautical Map of the Mahe and Amirantes Islands, Seychelles

An early nautical chart of the Seychelles.

This is a fine example of Laurie and Whittle's 1794 nautical chart or maritime map of Mahe and Amirantes Islands, Seychelles. It covers the Mahe and Amirantes islands, also known as the Three Brothers and the Seven Brothers, along with their shoals. When this map was drawn, the Mahe and Amirantes islands, along with the rest of modern day Seychelles, were under French control. Following the French Revolution of 1790, the colonists formed an Assembly in an attempt to govern the islands autonomously. Jean Baptiste Quéau de Quinc became the leader of the colony in 1794, the same year this map was created. When armed British warships arrived, later in 1794, he negotiated favorable terms of capitulation and the Seychelles became a prosperous neutral colony. When nearby Mauritius finally surrendered in 1810, at the end of the Napoleonic Wars, the British took full control of the entire region.

The map offers rich detail including countless depth soundings, notes on the sea floor, commentary on reefs, rhumb lines, shoals, place names and a wealth of other practical information for the mariner. As noted in the title, Laurie and Whittle derived this map from an earlier survey completed the Frenchman Monsieur le Vicomte Grenier made in 1776. This map was published by Laurie and Whittle from their offices at 53 Fleet Street, London, on May 12, 1794.