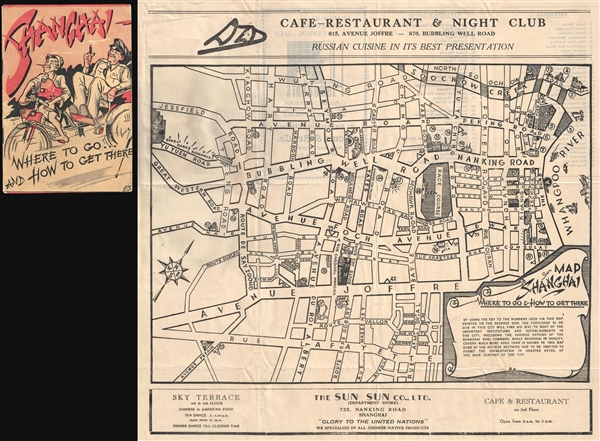 A rare c. 1930 map of Shanghai, China and accompanying guidebook for American marines and other servicemen on furlough in Shangahi. The map covers the central part of Shanghai from the conflux of the Soochow Creek (Wusong River) and the Huangpu River to, roughly, modern day Huashan Road, and from SooChow Creek to, roughly Fuxing Lu, then Rue Layfette. The map is not drawn to scale, but rather is meant to highlight places of interest to the American Servicemen. These locations range from Luxury Hotels, to the 'Dine, Dance, and Romance' nightclubs on Yu Yuen Road.

The small map accompanies a small guidebook to Shanghai. The book is primarily advertising, but does have some advice for the serviceman on leave:The Marines used to swear Shanghai was the best liberty boro on the circuit, and it still is … providing you know how to take it. On the other hand, it's the birthplace of every conceivable sort of gyp racket and squeeze and many of the local fraternity have perfected the art of skinning the tail right off a cat. In fact, if you happen to see a cat with a tail you know he is a tourist.The map was published by Sun Sun Department Store of Shanghai, where it was most likely sold. The accompanying guidebook was published by the Globe Advertising Agency, Shanghai. This offering is extremely rare as we have been able to identify no other known examples.

The Sun Sun Company / 新新公司 (1926 – 1950) was a department store founded by Liu Shik-Chi in 1926 at 720 Nanking Road, Shanghai. Along with Sincere, Wing On and Da Sun, it was one of the four large Chinese-owned department stores on the then Nanking Road. These stores, often simply called 'The Companies' catered both to Chinese nationals and foreign visitors with a broad selection of international products. Their success transformed Nanking Road into Shanghai's leading commercial street. In conjunction with its commercial presence, Sun Sun Company also controlled an active publishing concern, issuing English language books, guides, and magazines for foreign travelers in Shanghai. The company was nationalized c. 1950. Learn More...

Very good. Map detached from but included with original guidebook.
Looking for a high-resolution scan of this?