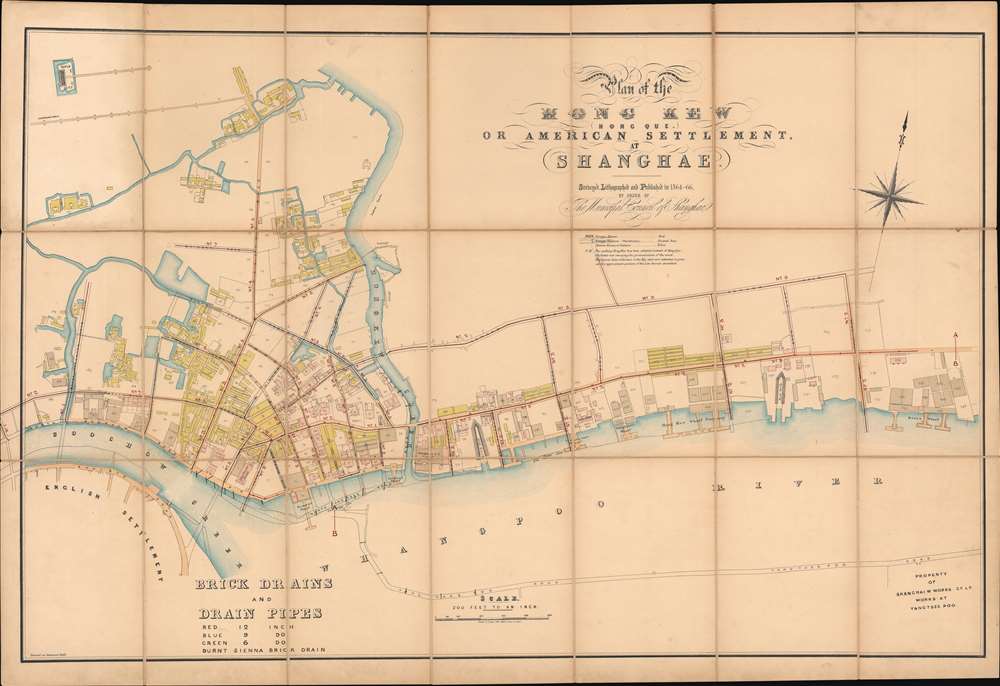 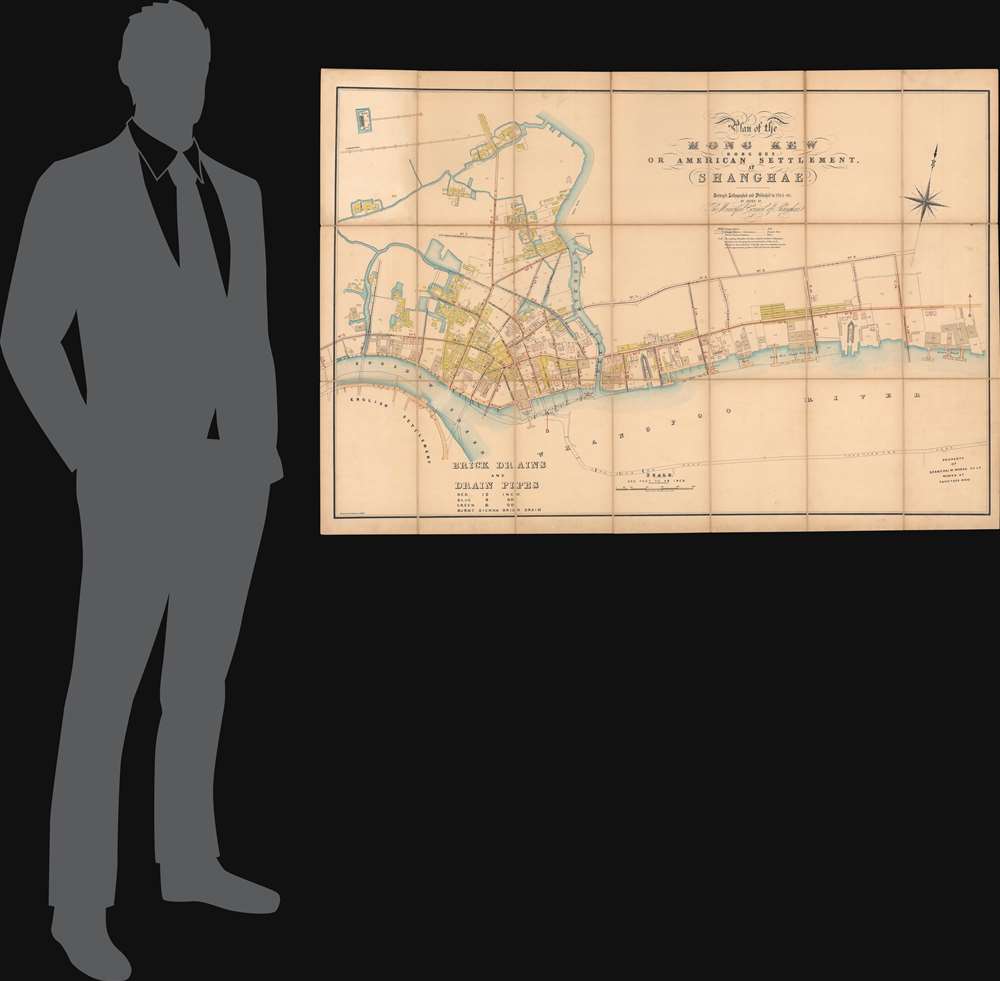 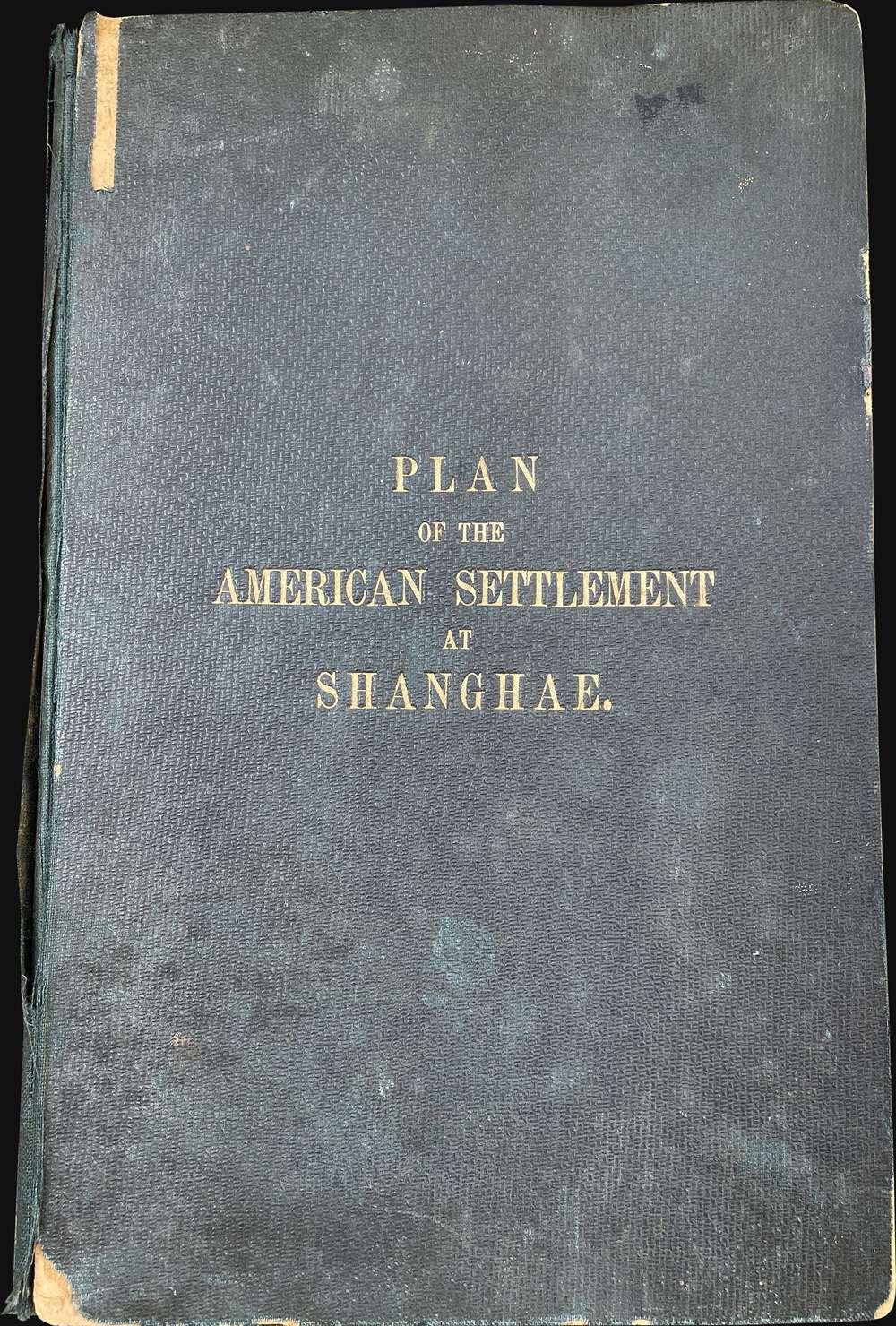 A remarkable, rare, and highly detailed 1866 map of Hong Kew (Hongkou, 虹口区), or the American Concession in Shanghai - possibly the earliest known map to specifically illustrate the American Settlement. The map follows shortly after the formal establishment of the Concession and subsequent International Settlement in 1863 and details in manuscript the construction of subterranean drainage lines by the Shanghai Municipal Council.

Oriented roughly north by northwest, the map covers the original American concession from North Szechuan Road (modern day Sichuan Rd), along the north bank of Soochow (Suzhou) Creek to Dent's Wharf. Individual buildings are numbered suggesting that the map may once have accompanied a key or book, but such has long been lost. Manuscript annotation and color coding labels subterranean draining pipes of 12 (red), 9 (blue), and 6 (green) inches, as well as brick drains (burnt sienna). Additional proposed landfill work is ghosted over Suzhou Creek and the Huangpu River.

In 1845, American missionary and Episcopalian bishop William Jones Boone (1811 - 1864) acquired a large parcel of land in Hongkou (虹口区), north of the British Concession, Shanghai. His initial plan was to build a church and sell real estate, but in 1848, he proposed a permanent American settlement similar to the British Concession. While construction on the settlement proceeded, the land was not formally established as an extraterritorial zone until June 25, 1863. On that day, Shanghai County Governor Huang Feng (黃芳) approved the request and American consul George Seward signed an agreement to create the American Extraterritorial Concession. A few months later, on September 21, 1863, the American Concession merged with the British Concession as the Shanghai International Settlement (上海公共租界). In the second half of the 19th century, the area of Hongkou became known for 'Shanghailanders', British and American expatriates who refused to pay taxes to the Qing. Initially, the International Settlement was reserved exclusively for those of European descent, but over time it gradually opened to Chinese and Japanese. By the early 20th century Hongkou came to be dominated by Japanese businesses and was a hotbed of unrest in the years leading up to the Second Sino-Japanese War (1937 - 1945) and World War II (1939 - 1945).

This map was surveyed on the order of the Shanghai Municipal Council in 1864, one year after founding of the American Concession. It was printed and published in 1864 in London by the firm of Nissen and Parker. There are but two other known examples, one at the Peabody Essex Museum in Salem, Massachusetts, and another at the Library of Congress. This map does not appear in Virtual Shanghai, however, we do note a plan of the British Concession in a similar style, published in the same year, also by Nissen and Parker.

Shanghai Municipal Council (July 11, 1854 - 1943) was an organization of businessmen leaders in Shanghai active from middle part of the 19th century to the early 20th century. The organization was formed on July 11, 1854 by a group of influential western businessmen who argued that Shanghai suffered under a lack of proper municipal governance. It laid down land regulations and began to assist in the construction of new roads, established refuse collection, and even initiated taxation. By the late-1860s Shanghai's official governing body had been practically transferred from the individual concessions to the Shanghai Municipal Council (工部局). The British Consul was the de jure authority in the Settlement, but he had no actual power unless the ratepayers (who voted for the council) agreed. Instead, he and the other consulates deferred to the Council, which was made of 9 figures, 5 from the British Settlement, 2 form the American Settlement, and 2 from the Japanese Settlement. No Chinese were permitted to serve on the council until 1928. By the 1880s the council acquired a virtual monopoly over city utilities, controlling gas-suppliers, electricity producers and water-companies. Later, in the early 20th century, they also took control of rickshaws, tramways, and regulated opium sales and prostitution. The council maintained its own police force, fire service, and military reserve, the Shanghai Volunteer Corps (萬國商團). The Municipal Council was disbanded in 1943, in World War II, when the Japanese closed all foreign concessions (except the French). Learn More...


Hilary Nicholas Nissen (1813 - August 25, 1877) was a British stationer, politician, sheriff, and businessman. Nissen founding the firm Nissen and Parker, at 43 Mark Lane, London. The firm is best known for servicing the London financial market, printing bank notes, checks, certificates, and drafts, maps, and books. By 1867 they became Nissen, Paker and Arnold. By the early 20th century, the firm changed to Nissen and Arnold. At their height the firm serviced nearly 2000 banking and Mercantile establishments. Nissen served as a London Sheriff in 1863 and 1864, about whom the following satirical poem was composed and published in the 1864 Eleventh Londoniad,

And here I was a new artistic strain
For Hilary Nicholas Nissen of Mark-lane,
Whose fam'd house the first in Middlesex is,
Lo! His Improvement in Book Indexes;
I T' incorporate in th' Londoniad
Throught; but see th' great advance my hero made.
He the great triumph of th' age has shared -
Note, his Paper Chemicaly Prepared.
The great Art Controvertist hail; I hear
His name resound in either hemisphere,
And that few, if any, have such a brain
As the prime hero of science in Mark-lane.
Cheque-printer, him we first in England rank,
His name's in ev'ry public, ev'ry private bank;
But need I through the vast Catalogue range,
of 43, Mark-lane, near to the Corn Exchange'
It can never fall to my lot again,
To have Lord Mayor and Sheriff with such heart and brain.

Nissen was also a master of the Fruitierers Company, a kind of London guild, initially associated with the fruit industry, that can trace its roots to the 14th century. Learn More...